INDONESIA: Indiscriminate shooting by Wamena police results in one dead and two injured

Police in Wamena, Papua killed Ismail Lokobal, fired near fatal shots at Amos Wetipo (which resulted in him slipping into a coma) and Frans Lokobal and arrested of at least 4 more persons. The shootings into the crowd and following arrests in Wamena, Papua followed the confiscation of an air cargo delivery to a local community security organization. Organisation members protested at the airport office against the confiscation. 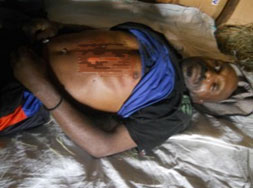 On 4 October 2010 at 8:30am the police at the airport post (KP3) of Wamena town, Papua confiscated a delivery meant for PETAPA (Guardians of the Land of Papua), an indigenous community security organization via Trigana Air’s plane cargo service from PETAPA’s headquarter in Jayapura. The delivery included uniforms for the organization members, Rp 40,000,000 (4500USD), a mobile phone and several documents. KP3 staff at Wamena airport admitted that “these items were detained at the request of the Wamena police who had already received a report that the items in question were under suspicion”. (photo: Ismail Lokobal, deceased, source: WestPapuaMediaAlerts)

Two trucks with crowd control units of the police arrived along with other vehicles. The delivery items were immediately seized and Amos Wetipo, Head of PETAPA for Wamena area was interrogated. Seeing this situation develop, various members of PETAPA arrived at the KP3 airport office. As the situation escalated the police fired into the unarmed crowd of protesters. The sound of gunshots triggered panic. In the ensuing chaos, three people were shot, at least 4 people (Laorens Logo, Johanis Heselo, Aleks Wetapo, Oto Wetapo) were detained by the Jayawijaya Resort Police, and several more were wounded. (photo: Laorens Logo, arrested, source:DAP)

PETAPA member Ismail Lokobal, died at the scene of the incident of a bullet wound to his torso. (see

photo here) It is reported that he had sought shelter in a nearby office of the Papuan Customary Council while police were shooting indiscriminately. Amos Wetibo was shot in the head after he refused to get down from a police truck. He was rushed to the hospital after he fell into a coma. Frans Lokobal was shot in his wrist and also brought to hospital. (photo left: Amos Wetipo, source:DAP; photo right: Frans Lokobal, source:DAP)

A statement was released by John W. Wetipo (Regent of Jayawijaya), who judged that “this must be handled following the correct Indonesian legal procedure, because this incident is a human rights violation”, John was quoted from a cell phone conversation.

Following the tragic and violent incident the atmosphere in Wamena is reported to have become tense. On Tuesday October 6, 2010 military commander of the Cenderawasih Command Major-General Hotma Marbun announced that, as there are no more separatist groups in Papua control should now be in the hands of the police. However, on Wednesday October 7, 2010 fully armed combat troops of the securtity forces were reported to have patrolled the streets of Wamena as a show of force to discourage any unrest. (photo: armed troups patrolling Wamena on Oct. 7, source:WestPapuaMediaAlerts)

Wamena, a central town in the Papuan highland region is heavily militarized and suffers from an oppressive climate due to the tense security situation. The AHRC had earlier reported about cases of killings and police violence from the area. AHRC-UAC-168-2009; AHRC-UAC-152-2009

SUGGESTED ACTION:
Please send letters to the authorities below calling for an independent investigation into the case, the effective prosecution of the perpetrators, an improvement of the professional capacity of police in Papua, demilitarization of the Papuan provinces with a new security approach not based on intimidation and to initiate genuine political dialogue between Jakarta and the Papuan province.

The AHRC is also writing separate letters to the Special Rapporteurs on extrajudicial, summary or arbitrary executions; the situation of human rights and fundamental freedoms of indigenous people and the Independent Expert on minority issues.

INDONESIA: Indiscriminate shooting by Wamena police results in one dead and two injured

I am writing to voice my deep concern regarding the extrajudicial killing and shooting of innocent civilians by members of the police. The indiscriminate shooting into a crowd of unarmed persons was nothing less than a criminal act.

The victims had gone to the airport to take possession of a shipment addressed to their organisation. Without explaining their actions or attempting to justify them in any way, the police confiscated the shipment and when the victims protested the police opened fire.

One man was killed in the shooting and another two were injured.

Of the latter one fell into a coma after having been shot in the head. His prognosis is not good. A further four persons were arrested. This happened after the local military commander announced in public that as there were no longer any separatist groups in the area the control of law and order should be handed back to the police. However, this is how the police carried out their very first operation. Killing one and wounding two others.

I call upon you to ensure that there is an independent investigation into this incident and that the perpetrators of this unnecessary tragedy be prosecuted.

The Papuan provinces should be demilitarized and a genuine political dialogue initiated between Jakarta and the people of these provinces.

The use of violence against anyone ‘suspected’ of anti government actions must be stopped and this can be done only through a suitable dialogue. I ask you to please ensure that this incident is not repeated.

SRI LANKA: A man is shot while in the custody of the Mihintale Police »