Home / News / INDONESIA: The killing of a Papuan at a demonstration remains unpunished

INDONESIA: The killing of a Papuan at a demonstration remains unpunished

The Asian Human Rights Commission (AHRC) is concerned that no one has been held accountable for the shooting of indigenous Papuan Mr. Opinus Tabuni over a year ago during an operation by armed forces, and no progress has been seen in the investigation. Mr. Tabuni was shot dead in Wamena during a celebration of the UN International Day of the World’s Indigenous People, after a peaceful demonstration took place. The event was held to bring attention to the Papuan campaign for self determination and the human rights atrocities related to it. 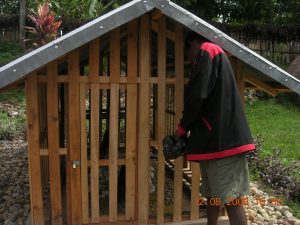 According to local human rights organisations, around 20,000 indigenous Papuans from different Wamena Regency highland tribes gathered on the Sinapug field near Wamena city on the morning of August 9, 2008, to celebrate the United Nations International Day of the World’s Indigenous People. The celebrations were attended by visitors from several other countries.

At around 2pm, after welcoming remarks from the Papuan Customary Community, a group of unknown persons appeared and ran through the crowd before raising a UN flag, an SOS flag, the Papuan Morning Star flag and an Indonesian national flag. The act wasn’t scheduled, but rather an unofficial attempt to turn international attention to the problems facing the indigenous communities in Papua and urge more UN commitment on the issue. The Morning Star has been outlawed in Indonesia.

After 28 minutes armed police officers and agents from the National Intelligence Agency (BIN) started firing their weapons into the sky, while standing about 3 to 4 metres from many of the protesters. Only some of them reportedly wore a uniform. The presence of army personnel was also reported. The participants dispersed in panic, and the firing continued for approximately 5 minutes, during which Opinus Tabuni was shot dead (his grave is pictured, left). Tabuni, 49, was a civilian who lived in the nearby Pyramid area, in sub-district Assologaima.

By 3pm all police and BIN staff had left the area, and a group of participants took Tabuni’s body to the local office of the Customary Council, Dewan Adat Papua (DAP). The following day local human rights groups and the family of the victim helped take the body to the General Hospital in Wamena for an autopsy, where it was revealed that the bullet passed through the ribs and into the victim’s heart. Following investigations, the National Human Rights Commission (Komnas HAM) concluded that the bullet was issued by the military. (See photo: corpse of Mr. Tabuni after Police and BIN left the scene and photo: Mr. Tabuni’s heart with the bullet during autopsy. Attention: graphic images).  A complaint was filed on 9 August, 2008 at the Jaya Wijaya Regency police headquarters, however no investigation has appeared to have taken place and no one has yet been charged.

Indigenous Papuans face systematic discrimination throughout West Papua, which is largely controlled by the military. They suffer many forms of intimidation and human rights violations, often when trying to exercise their right to free expression; Mr. Tabuni’s case is just one of many extra-judicial killings recorded by the AHRC and other local NGOs, though efforts to gather information are often obstructed.

Many Papuans compare life under Indonesian rule to that under Dutch colonialists and find that their situation has worsened in terms of inclusiveness and their enjoyment of rights. When West Papua’s formal colonial rule ended in 1961, the Dutch prepared the country for independence with an election for a West Papuan assembly. The assembly decided on matters such as the national anthem and the national flag, the Morning Star (now prohibited as a symbol of independence). However in 1962 before full independence was achieved, with Indonesia threatening a military invasion, the Dutch agreed to the United Nations Temporary Executive Authority (UNTEA) administrating the region. Nevertheless, in 1963 Indonesia took control of West Papua and in 1969 the so-called ‘Act of Free Choice’ was used to validate their rule; about 1025 selected tribal leaders representing the Melanesian population were asked to choose between independence, or affirming Indonesian national affiliation of the territory. This process was reportedly flawed, with evidence of intimidation and bribes, and it breached the UN agreement. The act became known as the ‘Act of No Choice’. Since then independence movements have been repeatedly and violently suppressed in the province.

West Papua is now the resource-richest province in Indonesia, with gold, copper and other resources mined by international companies such as Freeport-McMorran. The Papua-based Indonesian military takes a large cut of the profits and protects these interests by maintaining a strong presence in these areas. Despite the resulting human rights violations, Papuan activists have been unsuccessful in their calls for the de-militarisation of West Papua.

Major violations have yet to be adequately addressed, including massacres perpetrated by the Hasanuddin special forces under President Suharto in Baliem valley, and incidents in Wasior in 2001, in Wamena on October 6, 2002, and April 4, 2003, in Biak on June 6 2006, and in Abepura on March 16, 2006, in which sweeping operations by the military and police resulted in a number of Papuans being killed. Indigenous Papuans continue to express their dissatisfaction with the ongoing administration and the exploitation taking place under it, and they continue to be aggressively silenced by security forces, yet the incidents are rarely reported officially. Infrastructure remains limited in remote areas of the region and corruption among police makes it very difficult to file a case. (See our appeal, UAC-143-2009: Police and soldiers burn houses and destroy resources in Papua’s Bolakme district, as an example).

After 56 years of Indonesian administration–eight under a Special Autonomy Law (Law no. 21/2001 of Indonesia)–and some efforts in Jakarta to increase the province’s budget, there has been no visible improvement in living conditions for Papuans, and this warrants serious international attention. Among the main issues obstructing meaningful development are local corruption, rivalry between the police and the military, and institutional discrimination against indigenous Papuans, which is worsened by the state-encouraged transmigration of millions of Javanese and other ethnic Indonesians to Papua. The education system, medical care, economic development and the public administration are in a shocking condition, given the resource-wealth of the region.

As a State Party of the International Covenant on Civil and Political Rights has the obligation to respect the fundamental rights and freedoms of all persons, and pertinent articles include article 2, the right to an effective remedy–which in this case would involve a prompt and impartial investigation and effective criminal proceedings article 6, the right to life, article 19, the right to freedom of expression. According to domestic law, the family of the victim is also entitled to compensation.

Please write to the Indonesian authorities listed below to demand an immediate investigation into the murder of Opinus Tabuni, and the swift prosecution of the perpetrators. Please also ask for the intervention of the National Human Rights Commission and the National Police Commission.

The AHRC has written a separate letter to the Special Rapporteur on extrajudicial, summary or arbitrary executions calling for an intervention in this case.

INDONESIA: The killing of a Papuan by police at a demonstration remains unpunished

Name of the victim: Opinus Tabuni, 49-year-old, resident of Pyramid, in Assologaima, Wamena.
Name of alleged perpetrators: Members of the police and the national Intelligence Agency (BIN)
Date of the incident: August 9, 2008
Place of the incident: Sinapug field near Wamena city

I am writing to register my deep concern about the extrajudicial killing of Opinus Tabuni during a military operation, and the lack of investigation into his death in the year since.

According to the information I have received, Mr. Tabuni was killed during a five minute round of indiscriminate firing by armed police officers and agents from the National Intelligence Agency (BIN), some of whom were not in uniform and did not identify themselves. The firing was among a civilian crowd in response to the unscheduled raising of four flags  the UN flag, an SOS flag, the Papuan Morning Star flag and an Indonesian national flag  by a small unknown group of men, during a celebration of the UN day of the World’s Indigenous People in the Wamena highlands in 2008. About 20,000 people attended.

Mr Tabuni was a civilian who lived in the nearby Pyramid area in the sub-district Assologaima. It was left to a group of civilians to take Tabuni’s body to the local office of the Customary Council, Dewan Adat Papua (DAP) and then to the General Hospital in Wamena for an autopsy, where it was revealed that the bullet passed through the ribs and into the victim’s heart. Following investigations, the National Human Rights Commission (Komnas HAM) concluded that the bullet was issued by the military. A complaint was filed on 9 August, 2008 at the Jaya Wijaya Regency police headquarters, however no investigation has appeared to have taken place and no one has yet been charged.

The government of Indonesia is obliged under the constitution to take all necessary steps to protect, respect and fulfill the right to liberty of all individuals in its territory, and ensure that as victims of human rights violations they have access to judicial remedy. This is also obliged under international law, including article two of the International Covenant on Civil and Political Rights (ICCPR), to which Indonesia is a state party.
I therefore urge you to ensure that an impartial investigation is immediately launched, followed by effective criminal proceedings against the perpetrators. The family of the victim is entitled to compensation, according to domestic and international law.

« NEPAL: Police abandon the investigation into the gang rape of an 11-year-old Dalit girl