INDIA: Two children executed and one critically injured in Assam

The Asian Human Rights Commission (AHRC) has received information from North East Dialogue Forum, a coalition of human rights organisations, and North East Research & Social Work Networking, a civil society organisation based in Kokrajhar, Assam, regarding the extrajudicial execution of two school children and the injuring of another by a joint team of Assam Police and Army. The incident occurred at Raidangbari village under Runikhata Police Station, Chirang District, Assam, in the early hours of 11 December 2013.

On 11 December 2013, two children were killed and one injured in an extrajudicial execution in Raidangbari village, under the jurisdiction of Runikhata Police Station. Raidangbari village is located about 239 km from Dispur, the capital of Assam. 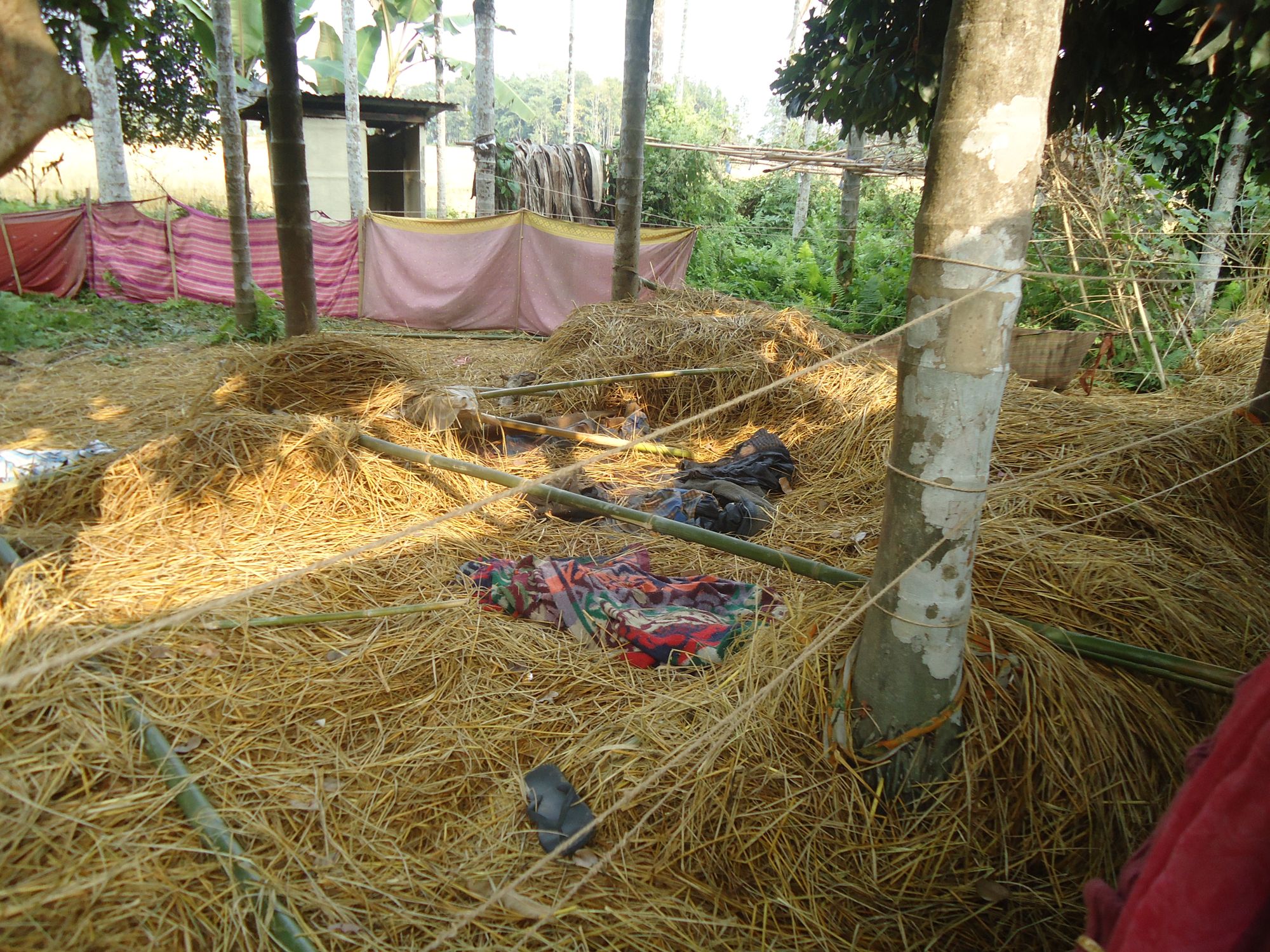 The three children are relatives. They were sleeping adjacent to Nikodin’s house on a haystack on the day of the incident. It is a practice in the village community to sleep on haystacks near the fields during harvesting season. Residents, often children, do so to protect the crops (see picture. Courtesy: Women in Governance-WinG-, Assam).

The officers arrived at the village in four vehicles. They started a house-to-house search. As the officers approached Samson’s house, they found three children sleeping on the haystack. Without warning or provocation, the officers fired at the children. Pranjit and Jerimiya died instantly and Nikodin was seriously injured. At present, Nikodin is receiving treatment at the Gauhati Medical College Hospital, Guwahati. After the firing, the officers tied the dead bodies of the two children to bamboo poles. They took the dead children with them. To prevent the villagers from coming out of their houses, the officers kept firing in all directions.

Eyewitnesses claim that the firing went on until 3 a.m. After firing at the children, the officers forcibly entered Samson’s house and detained him. He was taken to the Kajalgaon Police station where he was interrogated, tortured, and asked to confess that Nikodin is associated with an armed militant group suspected to be involved in the abduction of the two S.S.B officers. Samson denied the allegations, informing the police that Nikodin is only 13-years-old and is just a student. The police released Samson on the next day.

The villagers who came out of their houses when the firing stopped, protested Samson being taken away and the shooting of the three children. The officers fired at the villagers to prevent them from approaching the officers.

On 12 December, the police claimed that the two dead children are members of an armed militant group and that they were killed in an armed encounter with state forces. They claimed that the joint operation was carried out after the forces having received intelligence information. They further claimed that an AK 47 Rifle, a hand grenade, and 15 rounds of ammunition were recovered from the scene.

When the news regarding the execution spread, it provoked immediate protest. A mob gathered in front of the Runikhata Police Station. They claimed that the children are innocent students who had no connection with any militant group. The mob pelted stones at the police station and set on fire five police motorbikes. To control the mob, the police attacked them using lathis (big sticks) and fired tear gas to make the villagers disburse.

The state of Assam has been declared a “disturbed area” under the Armed Forces (Special Powers) Act 1958 (AFSPA) for decades. On 4 December 2013, the declaration was extended for a year. In Assam, a unified command structure is in place to carry out counter insurgency operations. The Chief Minister is in command, with the army as the operational group.

The Supreme Court of India, in 1997, framed AFSPA guidelines to be followed before, during, and after a military operation. However, these guidelines are often knowingly violated and cold-blooded murders are written-off as “encounter deaths” by the forces.

The practice of extrajudicial executions is rampant in Assam. However, accurate statistics on such killings are not available. Mr. R.N. Ravi, former Special Director of the Intelligence Bureau (IB) informed the media (The Assam Tribune, July 12, 2012) that in the last three years (2009 – 2011), killings by militants has decreased but extrajudicial executions by the security forces has increased. In 2011, 32 persons were killed in Assam by the militants, while 87 persons were killed by the security forces. The Assam Human Rights Commission has stated that 115 cases of “encounter-deaths” have been registered by the Commission in the last six years (2007- 2012). In Assam, the police are also involved in organised extrajudicial executions, labelled locally as “secret killings”.

Kindly write to the authorities listed below, expressing your concern and demanding a thorough investigation in the case. The AHRC will write a separate letter to the UN Special Rapporteur on Extrajudicial, Arbitrary and Summary Execution calling for his intervention into this matter.