Home / News / INDONESIA: Police shoot two brothers to death in Medan, questions arise on the proportionality and necessity of the measure

INDONESIA: Police shoot two brothers to death in Medan, questions arise on the proportionality and necessity of the measure

The Asian Human Rights Commission (AHRC) has received the information from the Medan Legal Aid Institute (LBH Medan) concerning the death of two brothers from Medan, North Sumatera. The two brothers, who were suspects in a drug case, were shot to death by the police who claimed that they attempted to escape and attack the officers at the time of the arrest. Yet concern has been raised by civil society in the legitimacy of the claim of the police. Under the current setting, there is no legal mechanism in which the claim of justification of the use of lethal weapons can be independently challenged and reviewed. 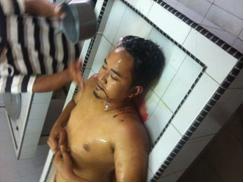 According to the statement by the police, Ramadhan was attempting to attack the officers with a knife and the police had to shoot him to death. After doing so, the police officer took Kiki to Bukit Hijau Regency Medan from Grand Aston hotel. The police officer said that while Kiki was trying to escape the police were also forced to shoot him to death. It was reported that seven bullets wounds were found on his body whilst Ramadhan was shot four times on his left chest and the side of his body. An investigation conducted by LBH Medan reveals that the bullets were fired at close range.

A video broadcasted by one of national televisions depicts the arrest of Kiki and Ramadhan. The video shows that Kiki wasn’t resisting and attempting to escape as accused by the police. He instead had his hands handcuffed.

The family of Kiki and Ramadhan was unaware of their deaths until one of Kiki’s friends informed them. The friend told the family that Kiki’s body was kept at the police hospital, Bhayangkara. Upon their arrival at the hospital, there were no police officers around who provided them with any explanation on the death of their sons. Instead, they faced difficulties to see both Kiki and Ramadhan’s bodies. As time of writing, the family has not received back their sons’ belongings which include smart phones, a ring and wallets.

The family has reported this case to the National Human Rights Commission (Komnas HAM), the ombudsman and the Indonesian National Police’s headquarter with the assistance provided by LBH Medan yet, as at the time of writing, the AHRC is not aware of any response given by these institutions.

The AHRC certainly does not support the trade in illegal drugs and believes that those who have been involved in recognisable crimes should be punished in accordance to the law. However, it wishes to emphasise that the protection of human rights should be one of the most essential principles upheld by law enforcement authorities in any country in performing their duty.

In 2009, the Chief of Indonesian National Police enacted Regulation No. 8 Year 2009 whose one of articles emphasise that the main purpose of arrest is to bring suspects to justice so that charges against them can be determined. Based on this provision, when it is necessary, shooting at criminal suspects should be for the purpose of disabling them and not to take away their life. Apart from that, the regulation emphasises that the police are obliged to respect and uphold human rights principles and standards in performing their duties. These include the obligation not to impose lethal measures against civilians without meeting the test of necessity and proportionality. As established under the UN Basic Principles on the Use of Force and Firearms by Law Enforcement Officials, the use of force and firearms may be justifiable only against ‘the imminent threat of death or serious injury’ and ‘in proportion to the seriousness of the offence and the legitimate objective to be achieved’.

In the similar document, the UN also emphasises that independent reporting and review procedures shall be established in the cases where the use of firearms and force by law enforcement officials resulted in the injury or death. Such procedures are yet to be set up in Indonesia. Despite the fact that it is often police officers who employ firearms and force, the victims and their families can only report to the same authorities should they wish a legal proceeding to be initiated.

SUGGESTED ACTION:
Please write to the authorities listed below asking for an effective and impartial investigation into the killing for the subsequent prosecution of the perpetrators and responsibility for the victims’ family.

The AHRC is writing a separate letter to the UN Special Rapporteur on extrajudicial, summary or arbitrary executions asking for his intervention in this case.

INDONESIA: Police shoot two brothers to death in Medan, questions arise on the proportionality and necessity of the measure

I am writing to voice my deep concern regarding the shooting of two brothers in Medan allegedly committed by officers attached to Directorate IV Drug Crime Criminal Investigation Bureau of the Indonesian National Police Headquarters on 24 April 2013. Based on the information I have received, Selly Satria Apianto (Kiki) and Ramadhan Puda Kesuma were staying at Room 1218 of Grand Aston City Hall when the police raided them for an allegation of their involvement in drug crimes.

I am not in any way expressing my support for drug crimes; neither am I conveying that legitimate laws should not be enforced. However, I strongly believe that in performing their duties, law enforcement officials should respect the principle of necessity, that is, alleged criminals should not be executed unless they pose imminent threats against the life of others. In addition to that, the officials need to make sure that the measures employed to stop the threats are proportionate.

In this case, the police mentioned that Kiki was shot as he was trying to escape whereas Ramadhan was attempting to attack the officers with a knife. In both instances, it is unlikely that they did not meet the tests of necessity and proportionality. A distributed short video shows Kiki had his hands tied up and was not resisting, making the police’s claim worth questioning. Yet even if he was trying to escape, Kiki was not posing any threats against the life of others as required in the necessity principle. Seven bullets were found on his body which indicated that the shooting was not meant only to stop him from escaping.

Similarly, the proportionality of shootings against Ramadhan is also questionable as four shot wounds were found in vital parts of his body, including the chest. Apart from that, the police’s unilateral claim mentioning that he was attacking officers should be challengeable and subject to review by an independent mechanism, which is lacking in Indonesia’s legal system as of today.

I am therefore urging you to take immediate actions including setting up an independent investigation to examine the summary execution allegation in this case. Legal action shall be taken against those who are responsible for such abuse and shall be sentenced to proportionate punishment which reflects the gravity of the crime. I am also urging you to provide the family with adequate compensation and rehabilitation.

I look forward to your positive and swift action in this matter.