(Hong Kong, August 3, 2012) The Asian Human Rights Commission has welcomed the release from prison on an amnesty today of Phyo Wai Aung, a young man falsely accused, tortured and imprisoned over the April 2010 bombing, and has called for him and other freed victims of gross abuses of human rights in Burma to receive rehabilitation and redress.

In a short statement posted on his Facebook page, Htet Wai Aung, the brother of Phyo Wai Aung, said that, “My brother, Phyo Wai Aung, [was] released by [the] Burmese Government today.”

He thanked those organisations and individuals who supported his family’s struggle for justice over two years, adding that the family would still fight to have his brother’s conviction overturned, but that the amnesty would allow his brother “to get appropriate and effective treatment without any limitations”.

In May, the AHRC issued an open letter to the president of Burma calling for the release of Phyo Wai Aung from custody in order that he could receive medical treatment for serious illnesses. The Hong Kong-based regional rights group has been campaigning on the case since after his arrest in 2010.

“It is further evidence that the authorities in Burma are responsive to calls from the international community for action on specific cases, and we hope that in future this trend will continue,” Wong remarked.

The release of Phyo Wai Aung coincides with a visit to Burma by a United Nations human rights expert with a mandate related to the country.

“The UN Special Rapporteur on human rights in Myanmar has also followed this case closely and worked on it constantly, and it is a credit to him and his staff and a reflection of the importance of the special procedures system under the office of the High Commissioner for Human Rights that this outcome has been achieved,” Wong said.

The AHRC Executive Director added that although Phyo Wai Aung’s release was an important achievement, his case spoke to a number of outstanding matters of concern for victims of human rights abuses freed from detention in Burma during recent times.

“Phyo Wai Aung, like other former wrongly detained and tortured persons, requires medical treatment, both physical and mental. At present, no arrangements exist for the rehabilitating of such persons, or the provision of other forms of redress for the wrongs they have suffered,” Wong said.

“This aspect of the release process now needs to become a priority in discussions that members of the international community have with authorities in Burma,” he added.

“Also, Phyo Wai Aung like most other released persons has a criminal record. This record needs to be expunged. This matter is another that at the present time deserves more attention and discussion, in order that society in Burma can begin to move forward. Otherwise, political change at the elite level will not correspond with meaningful change for everyone else,” Wong noted. 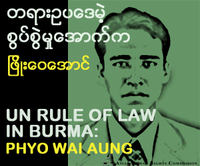 He added that the institutional arrangements, laws and personnel responsible for Phyo Wai Aung’s torture and imprisonment were continuing in their roles as before and that until significant efforts were made to effect lasting systemic changes, cases of the same sort would continue to occur in Burma.

The AHRC’s campaign webpage for Phyo Wai Aung, which contains detailed information on the case and relevant documents in both English and Burmese, is available here: http://www.humanrights.asia/countries/burma/phyo-wai-aung

The unedited text of the message posted by Htet Wai Aung to his Facebook page follows.

My brother, Phyo Wai Aung, is released by Burmese Government today. Without the continuous and tireless effort and support from the following persons and organization, this would not be happened.

We have to still fight for unfair decision but this amnesty help him to get appropriate and effective treatment without any limitations.

Thanks again for all who are with us for last more than two years.

« SRI LANKA: Will the Bar Association seriously defend the survival of the legal profession and judicial independence