Home / News / WORLD: The trial of a Khmer Rouge torturer — In the latest issue of Torture Magazine

WORLD: The trial of a Khmer Rouge torturer — In the latest issue of Torture Magazine

(Hong Kong, 30 September 2016) “The evacuations and arrests were just part of a larger Khmer Rouge project of mass social engineering which involved obliterating everything that smacked of capitalism, privatism, and class oppression,” writes Alexander Laban Hinton, Founding Director, Center for the Study of Genocide and Human Rights and Professor of Anthropology at Rutgers University. He is the co-editor of Colonial Genocide in Indigenous North America, published by Duke University Press, and author of the award-winning Why Did They Kill?: Cambodia in the Shadow of Genocide. 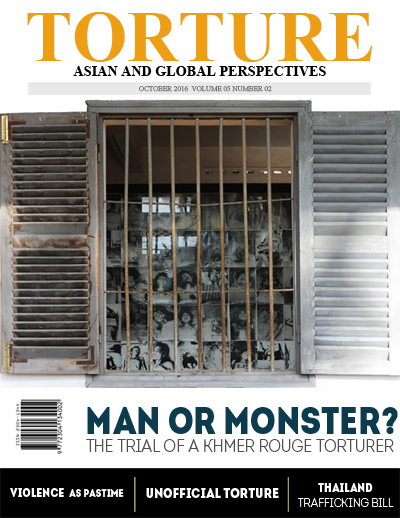 The full text of this essay is available in the latest issue of the Torture: Asian and Global Perspectives (Torture Magazine), to be published soon. The essay was adapted from the author’s forthcoming book, which focuses on the commandant of the S-21 security centre where thousands of unarmed civilians were eliminated. During the Khmer Rouge’s brutal reign in Cambodia in the mid-to-late 1970s, a former maths teacher named Duch served as the commandant of the S-21 security centre, where as many as 20,000 victims were interrogated, tortured and executed.

Meanwhile, focusing on enforced disappearances in Sri Lanka, M.C.M. Iqbal argues, “the Government is confronted with the legacy of persistent misrule by a regime that believed itself invincible. Condoning and overlooking the breaches of the rule of law by regime agents led to its demise. If that pattern is allowed to continue unchecked and appropriate remedial measures are not undertaken diligently, the perpetrators of human rights abuses and disappearances will continue to be a law unto themselves.”

M.C.M Iqbal is well known Sri Lankan Human Rights activist who had been involved in conducting inquiries and investigations into nearly 30,000 complaints of disappearances of persons in Sri Lanka while serving with Presidential commissions of inquiries appointed for this purpose.

In his essay on violence, Henry Giroux argues, “Popular culture not only trades in violence as entertainment, it also delivers violence to a society addicted to an endless barrage of sensations, the lure of instant gratification and a pleasure principle steeped in graphic and extreme images of human suffering, mayhem and torture. Violence is now represented without the need for either subtlety or critical examination.”

Henry Armand Giroux received his Doctorate from Carnegie-Mellon in 1977, before becoming a professor of education at several universities. He also served as the Director of the Waterbury Forum in Education and Cultural Studies and authored numerous of books and essays on the subject of pedagogy.

The online version of Vol.5 No. 2 will be available on www.torturemag.org soon.

Finally, it is with pride that we inform our readers and contributors across the globe that this is the fifth anniversary of Torture: Asian and Global Perspectives. After five years’ worth of publications, we feel that we have produced a meaningful contribution to the larger discourse centred on the eradication of the practice of torture. As we work to rebrand the magazine to build our audience and strengthen the anti-torture community network, we thank you for your continued support.

AHRC TV: Pakistan’s Imdad Ali to be executed and other stories in JUST ASIA, Episode 141 »