The AHRC congratulates its partner, Adilur Rahman Khan, for one more Award for his struggles against state-sponsored persecutions in Bangladesh. The awards that Adilur has been receiving one after another in recent months re-establishes the fact that the international community is closely observing Bangladesh’s human rights situation. 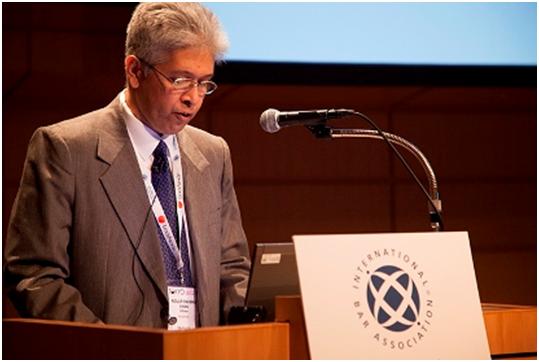 Conferred with the title for his outstanding contribution to human rights, the award was presented to Mr Khan by the President of the IBA, Michael Reynolds, at the Rule of Law Symposium held at the conclusion of the week-long IBA Annual Conference in Tokyo, Japan.

Throughout his legal career, Mr Khan has campaigned tirelessly against torture, extrajudicial killings, enforced disappearances, and violence against women and minority communities. On 10 October 1994, he founded the human rights organisation Odhikar,which has undertaken extensive fact-finding and reporting of human rights violations in Bangladesh. As a result of this work, Mr Khan and his family have endured harassment and persecution by the authorities.

On 10 August 2013, he was arrested and accused of ‘publishing false images and information’ and ‘disrupting the law and order situation’ of Bangladesh. The charges brought against him relate to a fact-finding report, published by Odhikar in June 2013, which detailed extra-judicial killings of 61 individuals by law enforcement personnel during a rally, organised by the Bangladeshi Islamic group Hefazate in May 2013 at Motijheel. The case against Mr Khan is still pending and he, his family and colleagues continue to face persistent surveillance and harassment from the Bangladeshi authorities.

During the presentation of the Award Mr Reynolds spoke of the importance of Mr Khan’s story for lawyers around the world, saying, ‘Let us be reminded that lawyers play a vital role in promoting justice, human rights and upholding the rule of law, both at home and abroad.  May Mr Khan’s courage, determination and resilience be an inspiration to lawyers everywhere.’

Throughout his legal career Mr Khan has provided pro bono legal counsel to political detainees and the families of victims of enforced disappearance and extrajudicial killings. Notably, Mr Khan worked towards the first conviction of police officers in Bangladesh, who were found guilty of torture and causing death in custody in May 2003 (Should be 1993).

In his acceptance speech, Mr Khan told the 200 delegates gathered at the Symposium, ‘The Rule of Law is under serious threat in my country. Justice for all the ongoing gross human rights violations is inaccessible for victims and their families.  Their right to access to complaint mechanisms is denied, regardless of whatever is written in the laws or the Constitution of the country. Repressive laws are in force and the independence of the judiciary is under attack in a spree of politicisation of institutions of the state. In Bangladesh now, every person is in fear of his or her life. The politicians, lawyers, members of civil society, youth and the people of Bangladesh know well that the prevalent fear embodied by state-orchestrated abuses of fundamental rights, in no way comply with democracy or rule of law […]. [This Award] not only encourages me to continue my work, but is also a catalyst and a boost of energy and renewed strength to the grass roots human rights defenders associated with Odhikar, who are lawyers, journalists, social workers, teachers and students.  They have also been harassed and threatened because of their activism. Within your support and recognition, Odhikar and I find the strength to continue to speak up for human rights in Bangladesh and be the voice of the voiceless, violated and members of the victim families.’

The IBA Human Rights Award, sponsored by LexisNexis, recognises personal endeavour in the field of law which makes an outstanding contribution to the promotion, protection and advancement of human rights and the rule of law. This year’s Award was presented on Friday 24 October 2014 during the IBA’s Rule of Law Symposium held at the conclusion of the 2014 IBA Annual Conference, at the Tokyo International Forum, Tokyo, Japan. 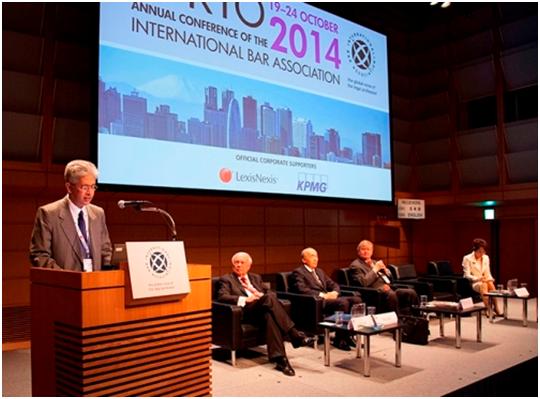 Notes to the Editor

1. The IBA Annual Conference is the most prominent gathering of international lawyers. Typically, the conference connects lawyers, barristers, judges, industry captains, regulators and academics from across the globe. They gather for an intense week of networking, learning and discussion. Topics include:  corporate social responsibility; oil and gas; globalisation; anti-money laundering; the rule of law; and anti-corruption and much more. The full listing, together with speakers’ and sessions’ details is contained in the Conference’s Final Programme. For full information on the Conference click here.

The IBA’s administrative office is in London. Regional offices are located in: São Paulo, Brazil; Seoul, South Korea; and Washington DC, US, while the International Bar Association’s International Criminal Court Programme (IBA ICC) is managed from an office in The Hague.

The International Bar Association’s Human Rights Institute (IBAHRI) works to promote, protect and enforce human rights under a just rule of law, and to preserve the independence of the judiciary and the legal profession worldwide.