(Hong Kong, May 7, 2011) At a meeting held today, 7 May, at a local cooperative society’s meeting room in Paikgachha, Mr. Sohrab Ali Sana, Member of Parliament for the Paikgachha-Koyra (Khulna-6) constituency, demanded the arrest of all suspects relating to the attack on FMA Razzak and his brother, which took place on 29 April. This attack was instigated and led by Major Mustafizur Rahman Bokul and was carried out by around 40 people including the major’s own brother Mokhlesur Rahman Kazal (widely known as Kazal Sarder). During the attack FMA Razzak’s eyes were gouged by Kazal and several others. Razzak and his brother Bodiar were severely beaten up and were injured critically. For further details, please see: FMA Razzak’s statement. 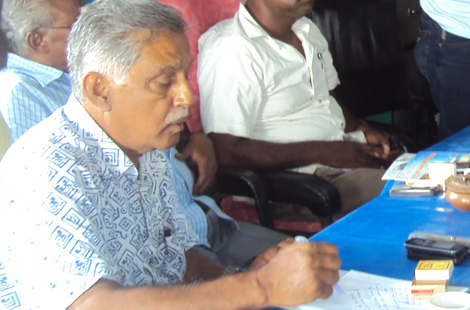 Mr. Sohrab Hossain Sana MP said that all suspects should be arrested and brought before the courts immediately. He explained that he himself is a lawyer and he is aware of what needs to be done under such circumstances. He further said that he will himself assist in ensuring justice.

Several persons also spoke at this meeting. Mr. Mostofa Kamal Jahangir, president of the Paikgachha press club, stated that Major Mustafizur Rahman Bokul and several of his family members, who are responsible for this attack on Razzak, should be immediately arrested and brought to justice. Several other speakers who also spoke at this meeting condemned this brutal attack and demanded the police to act responsibly and ensure that a proper legal process be carried out. Among others the president of the Paikgachha Bar Association Abul Hossain Joardar, secretary Kamrul Islam, former president G A Sabur, Government Pleader (GP) Chitta Ranjan Sarker, freedom fighters Mohammad Shahjahan Sharder, Shahadat Hossain Bachchu, former municipal mayor Sheikh Kamrul Hasan Tipu, press club secretary Bidhan Chandra Ghosh, social worker Abu Sayeed and many politicians, journalists and professionals attended and spoke in the meeting.

In the early morning of 7 May, the police at Paikgachha arrested the father of Major Mustafizur Rahaman Bokul and three others in order to investigate into the attack on FMA Razzak. At the moment they are being interrogated at the police station. It is hoped that the arrest of other persons would take place soon. The suspects are expected to be brought before the Magistrate within 24 hours according to the law in Bangladesh.

On 6 May, the mother of Major Mustafizur Rahman Bokul led a demonstration of a group of persons, most of whom were among the persons who were in the group that attacked Razzak and his brother, shouting that Razzak should be skinned alive. This group entered the Paikgachha police station and had a discussion with the police officers. Today, on 7 May, she is leading a meeting of a group of persons inside Major Mustafizur’s residence protesting about the arrest of her husband and others.

Attack on a witness’ family

Two persons, particularly Mr. Razab Behara and Azibor Sarder, who were named as the accused in the complaint filed on the attack on Razzak, went into the house of Mr. Azibor Gazi, a man who was with Razzak at the time when Razzak was attacked and saw the whole incident. Azibor Gazi has attended several of the protest meetings demanding the arrest of suspects relating to the incident and at the time he was meeting with the MP. The two accused that visited Azibor’s house carried long sharp knives (Ramdao). The two accused told Azibor’s father Mr. Afsar Gazi that his son was responsible for the arrest of Abdur Rouf Sarder, the father of Major Mustafizur, and threatened to kill Azibor with the Ramdaos. Since then, Azibor and his family have fled from the house and gone into hiding.

It is feared that these attackers may threaten other witnesses and prevent them from making statements to the police.

« PAKISTAN: Call for immediate arrest of the murderers of two activist fishermen and stop the land grabbing