Home / News / BANGLADESH: Men and women take to streets demanding the arrest of eye-gouger Major Mustafizur and his aides

BANGLADESH: Men and women take to streets demanding the arrest of eye-gouger Major Mustafizur and his aides 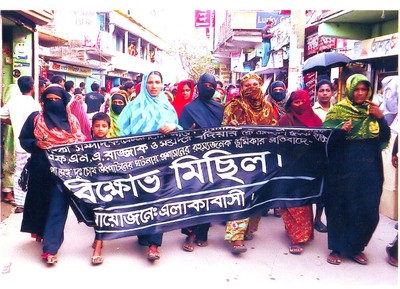 The procession demanded the arrest of the mastermind of the deadly attack major Mustafizur Rahman Bokul , his brother Mokhlesur Rahman Kazal (mostly known as Kazal Sarder) and all other perpetrators. The speakers demanded the removal of the police officers including the Officer-in-Charge (OC) Enamul Haque and other Sub Inspectors for assisting the perpetrators for the last two and half months to commit this latest heinous crime.

One of the speakers and co-organisers of the people’s protest Mr. Mohammad Shahjahan Sharder, a Renowned Freedom Fighter, told the Asian Human Rights Commission that, “I fought against the barbaric Pakistani military and their collaborators as a Freedom Fighter in 1971. Now I am ready to fight the perpetrators like major Bokul and his aides for their mediaeval brutality on Razzak and his family.” He said, “The citizens of Paikgachha demand immediate arrest of all the criminals including the army major Bokul and Navy officer Shafik”.

The journalists criticised the role of the law-enforcing agencies that have not yet initiated any investigation into the deadly attacks on FMA Razzak. They demanded immediate arrest of the eye-gougers who are freely moving in front of law-enforcing agents.