Home / News / BANGLADESH: Families demand return of their disappeared dear-ones within the month of Ramadan

BANGLADESH: Families demand return of their disappeared dear-ones within the month of Ramadan 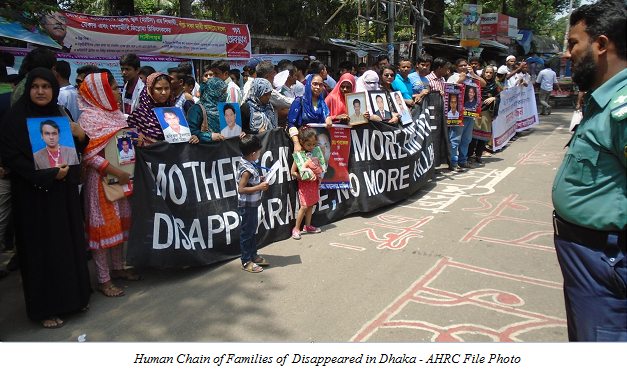 Members of families of 19 disappeared victims once again took to the street, yesterday, 26 May 2016. They formed a “human chain” in front of the National Press Club in Dhaka to demand the return of their loved ones within the month of Ramadan. Prominent human rights defenders, members of the civil society, and academic scholars joined the families to express solidarity.

Many disappearances occurred before the controversial Parliamentary Elections on 5 January 2014. Political dissidents were the main victims. In 2013, a total of 24 people were disappeared from Dhaka. None have since returned. On one day alone, i.e. on 4 December 2013, eight young men were disappeared from different areas of Dhaka City. The whereabouts of these men remain unknown. Parents, siblings, and wives of these 19 people do not know whether their loved ones will ever return. However, the agonising wait continues.

A little girl, Aroya, was one of the participants in the “human chain”. She was two years old when her father disappeared. Now she is five. She still stares at her father’s photo, wondering when he will come home. 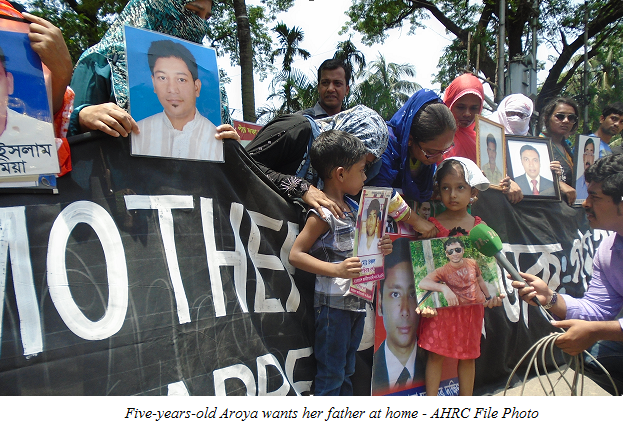 The condition of the parents of the disappeared is far worse. Ms. Marufa Islam, elder sister of Sajedul Islam Sumon, who was disappeared by the Rapid Action Battalion on 4 December 2013, stated that her mother’s tears have dried up with all the weeping. “She prays for the return of her son. In all these 19 families, the parents are waiting for their children every day – every single second”, said Ms. Islam.

The families took to the street prior to the holy month of Ramadan and Eid. They miss their dear ones much more during such festive occasions. They do not know whether the victims are still alive. They ask the State of Bangladesh the following questions: “What was the crime for which they were disappeared? Has the State ever considered the situation of those families whose dear ones are disappeared? How long do they have to wait to know the whereabouts and return? Does plights of the families really matter to the country’s Prime Minister?”

Most of the disappeared persons were students. They studied in different colleges and universities in Dhaka. Some were the only breadwinners of their families. 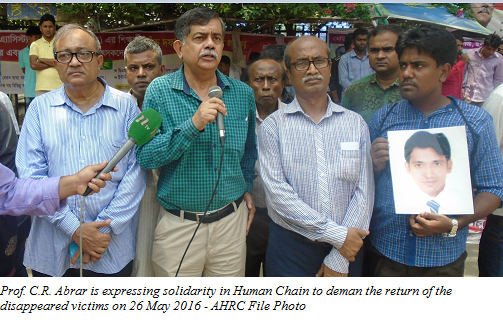 Victim family members have met with high profile government officers on several occasions, hoping that their intervention would enable the return of their disappeared family members. A number of habeas corpus writ cases have been filed with the High Court Division of the Supreme Court of Bangladesh. However, there has been no effective remedy available from the highest judiciary to returning the victims to their relatives.

The Asian Human Rights Commission urges the Supreme Court of Bangladesh to order the government to open an office headed by a retired Supreme Court Judge to address the grave problem of enforced disappearances.

The following 19 persons are the victims who have been disappeared from Dhaka since late 2013:

Some people dressed in civilan clothes, who introduced themselves as people from the “Administration”, picked him up from his house at Pallabi.

These two were picked up by Detective Branch (DB) Police from the jail gate of Dhaka Central Jail on 28 November 2013.

DB Police and people picked them up from the ‘Civil Administration’, Shahabag area, on 2 December 2013.

He was the Joint Secretary, Airport Police Station Unit, of the student wing of BNP.

RAB personnel dressed in civilian clothes, picked them up from Molartek, Dakkhinkhan. They were taken from in front of their relatives.

He was the President of the Sabujbag Unit of the student wing of BNP.

SRILANKA: Proposed Office of Missing persons is no substitute for immediate investigations into murders »