Home / News / HONG KONG/PHILIPPINES: Daughter of falsely charged activists to speak on fabrication of charges at a forum

HONG KONG/PHILIPPINES: Daughter of falsely charged activists to speak on fabrication of charges at a forum

(Hong Kong, May 29, 2013) Twenty-three year old Nicolette ‘Nikki” Gamara, whose parents have been laid with fabricated charges, will speak at a public forum tomorrow, May 30 from 7–9pm (please see below for the details of the venue), about the ongoing and systematic practice of fabricating charges against human rights and political activists in the Philippines.

Nikki’s mother, Amelita, is the deputy secretary general of Kilusang Mayo Uno (KMU) in Metro Manila (May First Movement-NCR); and her father, Renante, is a consultant for the National Democratic Front (NDF) of the Philippines in the peace negotiations with the Philippine government.

Nikki’s father, Renante, was illegally arrested on April 3, 2012. Upon arrest, he was tortured, ill-treated and denied prompt and adequate access to legal counsel and his family members. He still endures the injuries that he suffered from his arrest while in detention at the police national headquarters in Manila. For details please see: AHRC-UAU-004-2013. AHRC-UAU-016-2013.

Nikki’s mother, Amelita, had to go hiding when her name was included in an arrest order for charges of murder based on a fabricated case. She knew of the charges only after the arrest order was issued. She was not given opportunity to answer the charges before case was filed in court. For details of her case please see: AHRC-UAU-036-2012.

The Asian Human Rights Commission (AHRC) and the Hong Kong Campaign for the Advancement of Human Rights and Peace in the Philippines (HKCAHRPP), a coalition of human rights and migrants groups and individuals interested in human rights in Hong Kong, are hosting Nikki’s forum to draw attention on the renewed fabrication of charges against human rights and political activists in her country.

The details of the forum are as follows:

(Just above Jordan MTR Exit D, entrance of the building is along Tak Shing Street beside Mannings.) 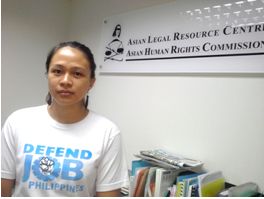 ABOUT NIKKI: Nicolette “Nikki” Gamara (23), is studying for a BA in Development Studies at the University of the Philippines, Manila. She is the youngest and only daughter among three children of Renante Gamara and Amelita Bravante. She grew up accompanying her parents in their daily routine work at the workers’ picket lines, urban poor communities and their organizations’ offices.

Nikki’s experience (she now volunteers for Defend Job Philippines), largely contributed to the reason why she has been determined to campaign for the protection of their rights despite the terror posed by her parents’ situation, and the stories of other victims, families of victims and human rights defenders in her country.

After Nikki’s father was arrested and her mother was laid with murder charges she resolved to continue their work by volunteering in organizations such as Defend Job Philippines, and is involved in the protection of rights. Her mother is also a Board Member of Defend Job Philippines. Moreover, despite the difficulties that her family is experiencing for being physically apart from each other and the complexities of the court cases, she is encouraged by the support by other people to her parent’s case which to her, reaffirms the importance of what she and her parents are doing.

« PHILIPPINES: Another two falsely charged activists to be arraigned for robbery tomorrow