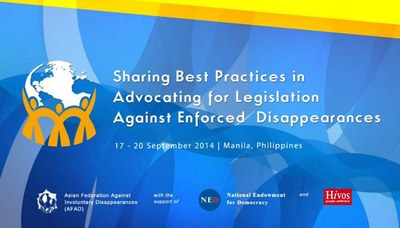 September 17-20, 2014, Manila, Philippines– We, the participants in the conference on “Sharing Best Practices in Advocating for Legislation Against Enforced Disappearances” coming from organizations fromArgentina, Bangladesh, Belarus, Chile, El Salvador, Guatemala, Hong Kong, India, Indonesia, Lebanon, Nepal, Philippines, Thailand, Timor-Leste and the United States of America are convened in Manila, Philippines, the first and only Asian country that has enacted a law against enforced disappearances, but has not yet signed and ratified the International Convention for the Protection of All Persons from Enforced Disappearance.

We highlighted the gains during the last years of struggle against enforced disappearances.  We emphasized that these are fruits of the permanent work done by the families of the disappeared and their organizations, of the national and international solidarity.  We emphasized the peaceful efforts in obtaining truth and finding disappeared loved ones in as much as we give recognition to the importance of consistency and the love for the victims.

The search for the disappeared persons were committed in the context of repression characterized by the cruelty and cowardice of public agents, protected by guaranteed impunity and in official lies that denigrate more its perpetrators rather than those who are affected.

We lament that until now, many states in the Asian region are not yet parties to the Convention.This is ironic because Asia is the continent that submitted the biggest number of enforced disappearances to the United Nations Working Group on Enforced or Involuntary Disappearances (UN WGEID).  States have to guarantee all of their citizens that they would never again be vulnerable to violations of the right to life, to physical integrity and should guarantee the access of victims and their families to justice and adequate reparations.

We likewise declare that crimes against humanity such as enforced disappearances should never be investigated and tried by military tribunals.

In the course of our inter-change of experience, we reflected on the situations of specific regions and particular countries.  In the Asian context, the Philippines is the example of a country that criminalizes enforced disappearance through the R.A. 10353 or thePhilippine Anti-Enforced Disappearance Act of 2012.  It has the record of being the first and only country in the vast regionof Asia.With the law’s Implementing Rules and Regulations, the spirit and letter of the law has now to be fully implemented.  Yet, two years since the law has been signed, no case has been filed yet.  With the recent capture of retired General Jovito Palparan has not been convicted for being the mastermind of the disappearance of the two lady students of the University of the Philippines and of many other cases that occurred during the Arroyo administration, filing a case of enforced disappearance is imperative.

Bereft of strong human rights instruments for protection to avail of, Asian human rights defenders especially in Southeast Asia push for a strong mandate of the ASEAN Inter-governmental Commission on Human Rights(AICHR) and demand them to particularly tackle cases of enforced disappearances, one of which is the case of the disappearance of Lao development worker,Sombath Somphone.  Yet the principle of non-interference is invoked by ASEAN states when they are called upon to take positions on particular cases.  If the AICHR is to be true to its mandate, it should take positions on specific cases.

In Indonesia, thousands of enforced disappearances and killings during the 1965 massacre remain unresolved, such as the cases during the eve of the fall of Suharto.  The assassination of the former AFAD Chairperson, Munir, remains unresolved.  The former government failed to fulfill its promise to ratify the Convention.  We join our sisters and brothers in Indonesia to call on the new government to give utmost priority to justly resolve past cases of human rights violations if it is to learn from its dark history of dictatorship and move on to a genuinely democratic government.

Timor Leste, a new country which acquired its independence only more than a decade ago, is stained by the blood of those who were killed and disappeared during the Indonesian occupation.  One third of its population were killed and made to disappear and more than 4,000 children were forcibly taken during the conflict and believed to have been brought to Indonesia and whose identity has been changed, thus depriving these children of the knowledge of their historical identity.  The truth about what happened to them remains unknown up to this day. To this end, the government must be serious to expedite the establishment of the bilateralCommission on Disappeared Persons.A breakthrough in this regard is important if Timor-Leste has move on as an independent country, learning from its bloody history.

India, Pakistan, Nepal, Sri Lanka and Bangladesh since long have been on the pretext of countering insurgencies,subjugating people to enforced disappearances and the work of human rights defenders in these countries has been made difficult by the governments. The importance of documentation was highlighted through the reports like “Alleged Perpetrators” which was produced by APDP in Kashmir, which aims at focusing on the individual culpability of the government forces responsible for enforced disappearances. It was observed that till States do not relent impunity for the armed forces, the campaign of naming and shaming the individual perpetrators would surely create some kind of deterrence.

The case from Nepal of Colonel Kumar Lama, in which Advocacy Forum has been successful in getting him arrested in the United Kingdom under the principle of universal jurisdiction was discussed.It was observed that this strategy of filing cases in different countries who have laws allowing the universal jurisdiction and human rights violations should be explored.

Our representative from the Asociacion Pro Busqueda de Ninas y Ninos Desaparecidosshared about the existence of the Inter-American Court for Human Rightswhich made a sentence pronouncing the state of El Salvador responsible for the disappearance of the Serrano-Cruz sisters.The state complied with reparation measures, which include among others, a public act of recognition of state responsibility, the publication of the sentence, the proclamation of a Day dedicated to disappeared children, providing medical and psychological attention to the families of the disappeared. Many other cases inother parts of Latin America have been presented to the Inter-American Court for Human Rights which brought concrete achievements to the victims and their families.

The Liga Guatemalteca de Higiene Mental has been working on the search for disappeared children during the last fifteen years.  Despite having absence of support of the government of Guatemala, more than 400 children who disappeared have been found and have been reunited with their biological families.  We call on the government to cooperate with the Liga in this important effort as part of the dream to attain genuine and lasting peace.

We have shared about the situation in Argentina and Chile which both experiencedthe dark years of dictatorship resulting in enforced disappearances.  Never during the time of dictatorship could the victims imagine that one day, they would realize the end of the dark years of repression resulting in series of actions to search for the disappeared, to prosecute the perpetrators and to attend to the devastating consequences of enforced disappearances.  So impressive is the level of organization of families of the disappeared and so commendable is their persistence that they are able to attain concrete victories in court.  In Chile, the downfall of Pinochet manifests the triumph of good against evil – a clear indication that with courage and determination,human rights violators shall have their day in court.   On the part of the Grandmothers of the Plaza de Mayo of Argentina, the finding of the 115th grandchild and their consequent reunion with their biological parents are sources of human gratification worth commendation by the international community.

We have also learned about the situation in Belarus, the only remaining dictatorship in Europe, a country where enforced disappearances occurred from 1999 – 2000.  Four famous politicians and public activists were kidnapped by a “death squad.”  The fate of the victims are unknown.  Despite the demand of international organizations and the decision of the UN Human Rights Committee, the government did not investigate these cases properly.

In our four-day conference, we shared and reflected on the distinctness and the commonality of our situation and our response.  In so doing, we have identified lessons:

We conclude this four-day conference on the eve of the 41st anniversary of the declaration of Martial Law in the Philippines with the hope that like the dark days of the repressive regime are over, in the future, the remaining repression and darkness would disappear.

Losing our hope is a bigger crime than the actual crimes perpetrated against us. Therefore, in this conference, we resolve that we are the agents of hope.

« ASIA: Wounds in the souls of the members of disappeared people’s families can never be cured