Home / News / ASIA: Wider partnerships and systemic efforts at grassroots are essential to combat trafficking in women and girls in Asia

ASIA: Wider partnerships and systemic efforts at grassroots are essential to combat trafficking in women and girls in Asia 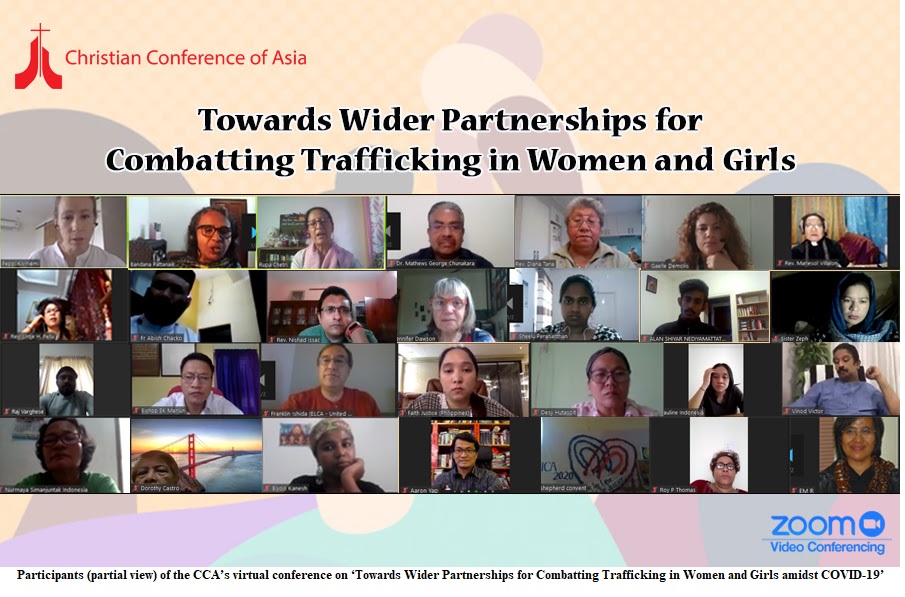 CHIANG MAI, THAILAND: The virtual conference organised and facilitated by the Christian Conference of Asia (CCA) entitled ‘Towards Wider Partnerships for Combatting Trafficking in Women and Girls amidst COVID-19’ called for systemic change supplemented with grassroots efforts to tackle the menace of human trafficking.

The COVID-19 pandemic has exacerbated the difficulties of identification and rescue of victims who have been pushed into labour and sex trafficking because of its economic fallout. The panellist and participants of the webinar held on 1 October 2020, the seventh in a series of webinars initiated by the CCA on COVID-19-related issues, affirmed that ‘business-as-usual’ could not be reverted to and that sustainable collaborative efforts were needed to eliminate human trafficking in all its forms.

The COVID-19 pandemic, which shows no signs of abating, is throwing up worrying spikes in the incidence of human trafficking—both trafficking-in-persons and online exploitation.

Women and girls, who majorly comprise the victims of trafficking are being specifically targeted by traffickers, given their vulnerabilities. New risks and challenges posed by the pandemic have halted the identification, rescue, rehabilitation, and integration of the victims of human trafficking.

Dr Mathews George Chunakara, the General Secretary of the CCA, in his introductory remarks stated that women and girls shared the brunt of the impacts of the ongoing COVID-19 pandemic crisis. The fragility of our systems and structures, as well as the widening of socio-economic divides, lead to various forms of social insecurity.

Dr Mathews George Chunakara said that the impact of trafficking in women and girls in Asia had become a hidden scourge as it led to sex trafficking. The crimes of human trafficking were not often detected, properly reported, or adequately prosecuted in most Asian countries.

The CCA General Secretary expressed concerns about the covert and overt ways in which predators and other criminals were now taking advantage of the ‘new normal’ to expand their dark web of operations.

While introducing the theme, Dr Mathews George Chunakara asked, “Will we be able to save our women and girls from trafficking? Can we effectively combat this menace? Do our governments possess the political will to abolish human trafficking? Do our law enforcement agencies and legal mechanisms have the capacity, knowledge, and resources to combat the complexities of trafficking? How can we all collaborate and initiate networks to be more effective in our efforts?”
Rev. Diana Tana, the Vice Moderator of the CCA, chaired and facilitated the webinar.

Gaelle Demolis, of the UN Women Asia-Pacific office, presented the emerging trends and changing nature of human trafficking in Asia after the onset of the COVID-19 pandemic.

Ms Demolis said that the Asian governments’ ‘security focus response’ diverted the already-stretched resources of law enforcement officials at the borders and took their attention away from detecting cases of human trafficking. She highlighted the importance of women law enforcement officials at the border who play a crucial role in detecting cases of human trafficking, as they are the only ones who can perform body searches on women and listen to the women who risk becoming potential victims of trafficking.

“We must have good partnerships at the local level between grassroots women’s organisations and law enforcement agencies. We may not always be coordinated, but we must build on each other’s work and support each other in our own ways,” added the UN Women official.

Peppi Kiviniemi-Siddiq, of the International Organisation for Migration (IOM), spoke of how the challenges of human trafficking were compounded under COVID-19.

“The global recession and the decreasing opportunities for regular migration has created conducive conditions for exploitation and human trafficking. We need to start thinking of how to ramp up the identification of victims of trafficking and protection measures, and see where we can improve and how we can streamline assistance,” said Ms Siddiq.

She also said that the uncoordinated opening and closing of borders would be deeply challenging for the future management of international and cross-border mobility, as well as for pre-existing visa and other immigration agreements between countries.

“The confusion for migrants around what constitutes regular migration and legal crossing of borders will likely make them more willing to engage with agents for support, which again will make them more vulnerable to being trafficked. This will need a multisectoral, inclusive, and collaborative approach that is clearly communicated to the migrant communities,” she explained.
In her presentation, Bandana Pattanaik, of the Global Alliance against Trafficking in Women (GAATW) focussed on the world of work and employment.

She said that current realities pointed to the unravelling of the neoliberal economic paradigm and the failure of the extractivist model of growth and development.

“Exploitation is no longer ‘exceptional’. Precarity is now a given in both the formal and informal sectors of the economy; coupled with the lack of public services and social safety nets, we see cascading impacts, where the informal employment of women itself is generated within the spaces of precarity,” said Ms Pattanaik while explaining the intricacies of the different sectors of the economy.

Ms Pattanaik added that under COVID-19, the ‘classic’ cases of trafficking were not observed, rather the emergence of contract violations, dysfunctional recruitment, workplace abuse, and delayed payments had all become gateways to human trafficking in Asia.
Rupa Pradhan Chetri, of the Mukti Network Nepal, shared the ground realities of the India-Nepal border, which is known as one of the busiest human trafficking gateways in the world. “The India-Nepal border is open and highly porous, that allows traffickers to function without being stopped or intercepted,” said Ms Chetri.

She spoke of how the traffickers’ tactics of coercion had morphed, saying that the traffickers now relied on grooming of potential victims rather than direct physical intimidation. “Under the COVID-19 pandemic, we are hearing cases of how traffickers are providing paltry relief and aid to create a sense of obligation in the minds of their victims. This new form of exploitation and grooming allows traffickers to lure victims into jobs and then traffic them for labour.”

Ms Chetri also called upon churches and faith-based organisations to intervene and aid in the prevention of trafficking.

“We are called to be the salt of the earth. This implies that we must step out of our churches and into the communities of vulnerable people. Traffickers lure their victims in convoluted ways. We must be creative and innovative in reaching out to potential victims and prevent them from being exploited,” she said.

Rev. Mariesol Villalon, who works in the Anti-Human Trafficking and Migrant Ministry of the United Methodist Church in the Philippines, spoke specifically of her country’s context, which has been termed ‘the global epicentre of the live-stream sexual abuse trade’.

“Images of naked and sexualised Filipino children are being uploaded, shared, and sold online. Filipino children are forced to do unspeakable acts in front of cameras and are ideal targets of predators and traffickers online. Poverty, cheap internet and smartphones, the ability to communicate well in English, the curtailing of means of family income, and the lack of parental supervision are all to be blamed for the sexual exploitation of Filipino children,” she said.

“We must empower our children to speak out. Churches must popularise children’s rights among the children and include it as core components in Christian education programmes. We must advocate for the responsible use of the internet and reiterate our prophetic ministry. This is a kairos moment to remind our congregations that each Filipino child and each Filipino woman is created in God’s image,” added Rev. Villalon.

Rev. Dr Lintje H. Pellu, of the Communion of Churches in Indonesia (PGI), shared the law enforcement concerns and inadequacies of the Indonesian government in effectively combating human trafficking in the archipelagic country.

“Inconsistencies in implementation, minimal coordination, and poor budgeting continue to adversely impact the progress of the Indonesian government in tackling human trafficking. We must also consider how human trafficking victims are likely to be re-trafficked due to lack of permanent jobs and past debt traps, which is exacerbated for women and children who are considered commodities in patriarchal Indonesian society,” she said.

Rev. Pellu advocated for the active participation of churches and faith-based organisations in partnering with key stakeholders and the promotion of the ratification of anti-human trafficking laws. “We must build ecumenical partnerships and relationships among organisations that work towards the same cause. The model of such partnership is multilateral and inclusive, and is expressed in the form of collective advocacy, public witness, networking, and dissemination of information,” she explained.

The panellists also shared best practices from their local contexts and organisational experiences. They suggested strategies for joint and collaborative actions to combat the trafficking of women and girls in Asia. These included: the creation of training manuals to handle cases of trafficking from a gender- and victim-centred perspective, the strengthening of linkages between national counter-trafficking taskforces and civil society organisations, strategic and innovative community and political mobilisation for broader engagement, community awareness-building concerning legal mechanisms, reaching out to perpetrators, bearing down on transnational trafficking networks to break the demand-supply chain, and economic empowerment of the vulnerable to prevent them from becoming victims of trafficking.

Rev. Diana Tana, in her concluding remarks, said, “The issue of human trafficking is overwhelming, and we have heard the anger and frustration along with the compassion and passion. Let us persist with our advocacy and mobilisation efforts, let us partner to develop strategies and eliminate trafficking, and let us continue to support and strengthen our communities and churches.”

Bringing together an expert group of panellists representing the UN and other international organisations, civil society organisations, as well as faith-based organisations, the CCA has provided a common platform to devise renewed forms of partnerships and collaborations for joint action against trafficking in women and girls.

« SRI LANKA: Statement on The 20th Amendment to the Constitution of Sri Lanka