PHILIPPINES: Duterte regime on a red-tagging rampage in Negros – Karapatan

A Statement from KARAPATAN forwarded by the Asian Human Rights Commission 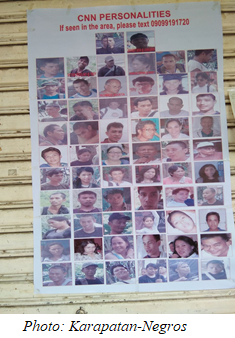 “The criminalization of activists and rights defenders is apparently the standing mandate of all agencies of government, regardless of whoever is appointed – from the Justice Department, the military, the police, and down to the local government. This practice of lumping together the names and pictures of progressives and labeling them as “terrorists” to justify violations against said individuals is becoming more commonplace under the Duterte regime. Truly, there is a repression spectrum with which this regime is employing without any hesitation,” said Karapatan secretary general Cristina Palabay.

On April 16, 2018, posters bearing the pictures of leaders of mass organizations was reportedly being circulated and posted in public places in Moises Padilla, Negros Occidental. The said material claimed that the individuals were “CNN personalities”, insinuating their alleged link to the Communist Party of the Philippines – New People’s Army – National Democratic Front. A number is also included in the poster — a hotline that directs the caller to the Moises Padilla police station.

In a radio interview with Aksyon Radyo Bacolod, Negros Occidental Police Provincial Office Director PSSupt. Rodolfo Castil Jr. admitted that it was his office’s order to circulate the said poster in areas in Negros Occidental. However, he denied knowing that the material mainly implicated leaders of progressive organizations.

“The PNP’s claim that they have no background on the individuals included in the poster is all hogwash. Just like all efforts to intimidate and harass activists, these practices are targeted and done with the specific objective to derail, discourage and endanger the work and lives of individuals vocal against the regime’s anti-people policies. Claiming ignorance is ludicrous. This is a systematic, targeted operation, and it is becoming more frequent,” added Palabay.

“This practice should be immediately condemned, and the Negros Occidental Police should be held accountable for spreading such a malicious poster. The police have used the pictures of individuals without their permission, and have done so to make it appear as if said persons have already been convicted or charged. This is an outright violation against their right to freedom of association, and a clear effort to harass and intimidate known activists,” explained Palabay, citing that the same posters were circulated in Davao City in November 2017, also bearing pictures of leaders of mass organizations.

“We condemn this maneuver and all tactics employed by the state to criminalize and repress groups and individuals. This is clearly an indication of increasing intolerance against genuine opposition, and the government’s stubborn stand to employ repressive practices against individuals instead of addressing their legitimate demands,” concluded Palabay.

« INDONESIA: Residents in Krembangan East Java forcibly evicted from their houses and then occupied by the Navy