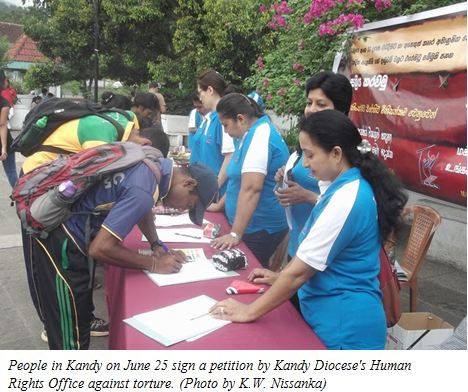 The United Nations Committee Against Torture (UNCAT) is in session in Geneva, Switzerland from Nov. 7 – Dec. 7 and Sri Lanka has been called to account for allegations of ongoing abuse.

The Sri Lankan government sent an 11-member delegation led by Attorney-General Jayantha Jayasuriya on Nov. 16-17 to respond to the accusations that there is regular use of torture. During the two-day sessions at the fifth periodic review, the Sri Lankan delegation was publicly grilled about the accusations by members of the U.N. committee.

However, Father Nandana Manatunga, head of the Human Rights Office in Kandy Diocese, said that the government is in complete denial about routine torture by police.
“We requested the government to indict torture perpetrators but nothing has happened even after the change of government,” said Father Manathunga, who is currently handling 60 torture cases.

“If the perpetrators are indicted and brought before the law and punished then things would change drastically. As for now they enjoy impunity and this encourages other police officers to continue torturing suspects,” the priest told ucanews.com.

“In order to indict torture perpetrators the special investigation unit should once again be activated to investigate police officers who are suspected of torture,” said Father Manathunga.

“We hope to continue our signature campaign calling for the government to activate the torture act and punish the perpetrators,” the priest added.

Jayasuriya informed the U.N. committee that Sri Lanka is still working on its National Human Rights Action Plan due to be completed in 2021. He said that the ongoing process will help the nation come into line with its international treaty obligations, according to a Daily News report.

Philip Disanayaka, executive secretary of the Right to Life Human Rights Center, who participated in the UNCAT review, said that the Sri Lankan government’s report on torture cases had been contradicted by figures from the Sri Lanka Human Rights Commission. 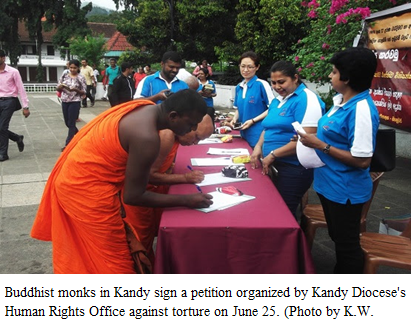 The Sri Lankan police admitted they tortured 30 people from 2011-2014 but the Sri Lanka Human Rights commission said that 2,210 people were abused. This clearly indicates that torture is a routine method used to force confessions from suspects, Disanayaka said.
“Even though the government has taken a few steps, it is not enough to eradicate this menace from society,” he added.

The Human Rights Commission of Sri Lanka also reported they received 413 complaints of police torture in 2015.

Brito Fernando, chief of the Families of the Disappeared, who also participated in the UNCAT review, said that the Chief of National Intelligence, Sisira Mendis was deliberately evasive when questioned.

Mendis oversaw the police Criminal Investigation Department during the last part the country’s civil war from March 2008 until June 2009. His units have been named by a U.N. investigation as being responsible for torture and sexual violence during the period, according to a Foreign Affairs report.

Even so, Fernando was hopeful that the U.N. review would have a good affect back home.
“This meeting offered the new government of Sri Lanka a major opportunity to signal a break with the past — to acknowledge the appalling scale of torture, and to demonstrate a genuine willingness to take the steps necessary to end its use,” he told ucanews.com.

« AHRC TV: Mass destruction in Burma and other stories in JUST ASIA, Episode 149