Home / News / INDIA: Supreme Court agrees Hadiya has the right to choice, not her parents

INDIA: Supreme Court agrees Hadiya has the right to choice, not her parents

The Kerala High Court made up for the lack of evidence by relying on its morality and biases, its prejudiced notions of how a young woman must behave and its obvious sympathies with Hadiya’s parents who were unable to exercise any control over their adult daughter. 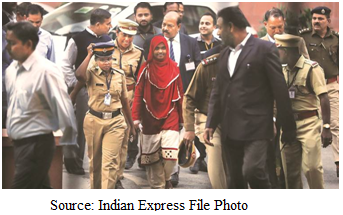 Hadiya deposed before the Supreme Court that she wants her freedom.

Amidst high security, intense drama and a media spectacle, the Supreme Court on Monday removed Hadiya from the custody of her parents and ordered that she be sent to her college in Salem, Tamil Nadu, to complete her studies. The College Dean has been appointed her guardian and reportedly, she is to be treated like any other hostel student. Hadiya deposed before the SC that she wants her freedom, that she has been in unlawful custody for the last 11 months and going forward, wants her husband to be her guardian so she can complete her education and be a good citizen.

The NIA submitted its 100-page report on forced conversions to the Supreme Court. It also questioned the role of the organisation ‘Sathya Sarani’ where Hadiya took temporary refuge from her parents, stating that Hadiya was forcibly converted to Islam by the Popular Front of India (PFI) and brainwashed by ‘hypnotic counselling’. The Court reportedly commented on this aspect, wondering whether the aspect of conversion in Kerala must be delinked from the Hadiya case. The matter has been adjourned till the third week of January.

Hadiya, who went by the name Akhila before she converted to Islam has been caught in a legal maelstrom since 2016, the subject of two habeas corpus petitions filed by her father Ashokan. The first petition was dismissed, after which in August 2016, Ashokan filed the second habeas corpus petition, alleging that Hadiya was going to be forcibly married off so she could be taken out of the country and that she was in the clutches of radicalised Muslims. On December 21 Akhila had claimed to have married a Shafin Jahan two days before. This move angered the High Court, which on May 24 annulled the marriage and called it a ‘sham’. Shafin Jahan then filed a Special Leave Petition against the HC order in the Supreme Court, which then ordered an NIA probe into the incident.

Exercising its ‘parens patriae (father of the country)’ jurisdiction, the Kerala High Court proved to be every bit the paternalistic, parochial Indian father, desperate to protect the child-adult-girl. Laying great emphasis on the contentions of Hadiya’s father which included the “right to give his daughter away in marriage” it was anxious and concerned about Hadiya’s “continued obstinance” to return to her parents and stated,

“Though the learned Senior Counsel has vociferously contended that the detenue is a person who has attained majority, it is necessary to bear in mind the fact that the detenue who is a female in her twenties is at a vulnerable age. As per Indian tradition, the custody of an unmarried daughter is with the parents, until she is properly married. We consider it the duty of this Court to ensure that a person under such a vulnerable state is not exposed to further danger, especially in the circumstances noticed above…” (emphasis supplied)

The order of May 2017 continues to rely on this obfuscated reasoning, completely devoid of any legal merit. The High Court was unable to accept that Hadiya delved into the study of Islam as this is not “normal human conduct of a girl aged 21 years”. It went on to blame unidentified persons for her indoctrination, unable to believe that she acted out of her own free will. It opined that Hadiya was married off so as to take her out of the reach of the High Court.

We are left wondering how a young woman’s act of marrying a man, whether arranged or not, whether forced or not, can take her out of the Court’s clutches. An adult woman who has not been proved to be mentally incapable of taking her own decisions does not have a ‘natural guardian’ and is well within her rights to marry whoever she pleases, with or without her parent’s consent. Whether her wedding was invalid under Islamic law is a different issue that was not even touched upon by the Court.

While the order points out various serious discrepancies in Hadiya’s conduct, such as using a variety of spellings for her new name, and even a different name from Hadiya on affidavit, it is unable to offer any solid proof of indoctrination or mental incapacity, which could serve as grounds for exercising its parens patriae jurisdiction to order Hadiya to stay with her parents. The NIA investigation and its report in the SC will be crucial to establish whether this was a case of indoctrination or a conversion out of free will.

While Hadiya’s counsel relied on a variety of cases in the HC to show that a major has an absolute right to choose a religion of their choice, the Court refused to accept this, stating that all the cases cited were cases of romantic liaisons and this case was nothing like that. An absolute inability to accept the autonomy and agency of a young woman to explore a different religion, an artificial distinction was created in order to accept and normalize one instance of free choice (falling in love) but not another (conversion).

Earlier in the order, the High Court also stated that “is not normal for a young girl in her early 20s, pursuing a professional course, to abandon her studies and to set out in pursuit of learning an alien faith and religion.” The HC believes that the “normal youth (are) indifferent towards religion and religious studies”, a mere opinion that cannot form the basis of deciding whether a woman converted out of her free will or not.

While ‘Sathya Sarani’ and its head Sainaba are referred to multiple times as having influenced Hadiya, it was not proved in the HC that the organization has links to extremist organizations or been involved in radicalization or forced conversions. The Kerala HC made up for the lack of evidence by relying on its morality and biases, its prejudiced notions of how a young woman must behave and its obvious sympathies with Hadiya’s parents who were unable to exercise any control over their adult daughter. While the judge the person is certainly free to his opinions, he is the custodian of law and is not free to apply his faulty reasoning and cultural biases while passing an order. The icing on the cake in this order comes at the very end.

“A girl aged 24 years is weak and vulnerable, capable of being exploited in many ways. This Court exercising parens patriae jurisdiction is concerned with the welfare of a girl of her age. The duty cast on this Court to ensure the safety of at least the girls who are brought before it can be discharged only by ensuring that Ms.Akhila is in safe hands.”

The Kerala High Court has a history of passing judgments such as these where the decisional autonomy and general agency of an adult woman is questioned, and parental authority is held supreme. The reasoning in all these cases is reflective of a deeply institutionalized patriarchy that exists in society, where a young adult woman is referred to as a ‘girl’, infantilizing her and decrying her capacity to take her own decisions. The parental authority over women, the act of ‘giving’ away a woman in marriage, the need to ‘protect’ her are all deeply sexist Indian notions that prevent women from living freely. All of these notions have found its way into the High Court order in 2017 and it is indeed deeply disturbing that a woman’s constitutional rights are taken away by relying on these fallacies.

Judges must remember that they are not custodians of our ‘girls’ morality and the HC focusing narrowly on Hadiya’s ‘vulnerability’ as a young girl, has taken the attention away from what might be a serious issue of radicalization. It is hoped that the Supreme Court, prevents the continued politicization of this case and takes a decision based on the law and the evidence on record, and not on mere sentimentality.