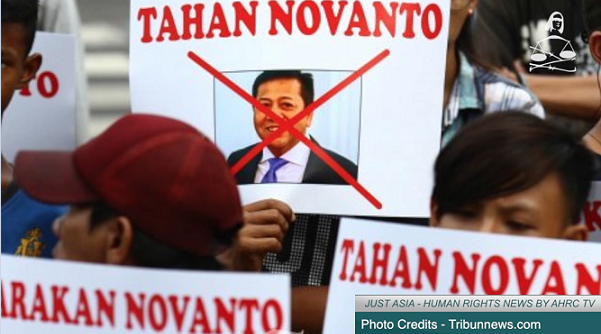 This week Just Asia begins with Indonesia, where the Corruption Eradication Commission finally secured the arrest of Parliament Speaker Mr. Setya Novanto. Novanto is a suspect in the national electronic identity card scheme case, having caused losses of IDR 2.3 trillion.

Next, Pakistan observed Universal Children’s Day on November 20 as a mere formality, while millions of children in the country are denied their basic rights. According to the Children’s Rights Index, Pakistan ranks 159 out of 196 countries in terms of child mortality, health and education facilities, and protection of child rights. Official figures show that nearly 40 million children in Pakistan are living below the poverty line and are in dire need of protection.

In Sri Lanka, a curfew was enforced for two nights after dozens of Muslim homes and businesses were attacked near the southern city of Galle. The violence erupted on November 17 after a traffic accident spiralled into street clashes. Mobs attacked 62 Muslim homes and business premises. Police and government officials emphasized that the violence had been stirred up by “extremist groups”.

Moving to India, the rule of law and freedom of expression are taking further hits, with senior political leaders offering bounties to behead lead actress Deepika Padukone and director Sanjay Leela Bhansali of the movie Padmavati. Citing concerns about the veracity and accuracy of the events portrayed in the film, right wing groups have been calling for the film to be banned.

In Nepal’s Tarai region, a 37-year-old man was thrashed by traffic police officers on November 19 for a minor infringement. Mr. Dhananjaya Yadav was assaulted for nearly half an hour. While the National Human Rights Commission has started investigating this case, recent days have seen an increase in police highhandedness in Tarai.

Moving to South Korea, last week the government announced it will crack down on workplaces that fail to address sexual harassment claims, warning of potential prison terms.
South Korea has a serious problem with violence against women, with 80 percent of the country’s men admitting to physically or psychologically abusing a female partner. The country ranks 116 out of 144 in global gender equality rankings.

INDIA: Supreme Court agrees Hadiya has the right to choice, not her parents »