An Article on “Right to Information and Batticaloa women : Hypothesis vs Reality” by Radika Gunaratna , published in the Daily Mirror issue of 20 April 2017, forwarded by the Asian Human Rights Commission

Yet, it is still questionable whether citizens from all corners felt the importance of such a law. Amidst all this drama, a unique incident reported from Batticaloa where 13 brave women marched their way to find the information they longed for. They walked up to five authorities seeking information of their loved ones who went missing during the internal conflict. On February 3, from dawn to dusk these daring women walked the dusty roads in Jaffna, Batticaloa, Vavuniya towns and to several police stations under the scorching sun tirelessly waiting to meet the relevant authorities.

They questioned the law enforcement agencies on the remains of the complaints they made at the time their family members went missing. They demanded the police to give them evidence on the whereabouts of their missing family members or at least let them know whether they are still alive. The one thousand odd questions from these women could have definitely given a shock to the public servants.

The information officer was absent in the Jaffna District Secretariat. According to the Right to Information Act Section – 5 Subsection 23 (1) (a), Every public service department (Public Authority) must appoint an Information Officer within three months of enactment. At the time these women went searching for information, six months had passed.
According to the Act, the head of the institute or the second in command can accept information requests and provide information as the alternative solution in the absence of an Information Officer. Despite this provision the Jaffna District Secretary, being the head of the institute, had been reluctant to accept requests made by these women. On accepting the public requests, the Act clearly states the institute must issue a receipt as the acknowledgement. Instead of a receipt these women were told to return in three days to inquire about the progress.

“We still have not received any information and the three days they mentioned passed weeks ago,” they said. 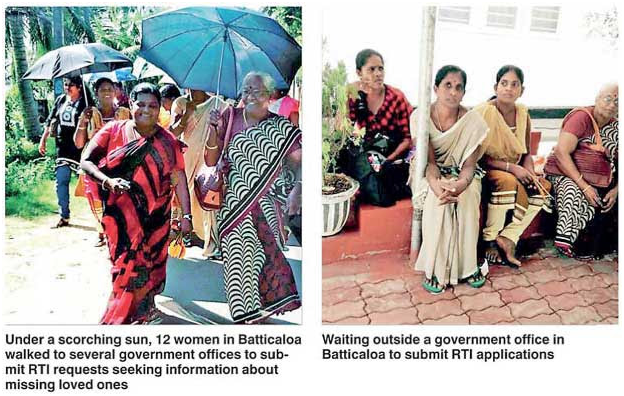 The other instance a debacle these women faced was at the Sri Lanka Police Deputy Inspector General’s Office in Batticaloa. As they reached the office three Police officers stopped them at the entrance and questioned what their inquiry was about. The women spoke in Tamil, as they decided to speak only in their mother tongue. Officers had to search for another Police officer who understood Tamil and had been quite stressful for them. Eventually it appeared that these Police Officers had no idea about a Right To Information Act existing!

“Two of you can come and meet the DIG,” replied the Police Officer.
The request was decently rejected by the women.

“Alright then. You all can meet the DIG,” said the Police officer who got totally lost directions in this case.

These women managed to reverse the common norms of power and bureaucracy with their soft and subtle negotiations. The usual practice is, the authority directs and the common person surrenders. In this incident the vice versa happened. These women were successful in creating a conducive environment without triggering any agitation. There were no threats from either side. As they met the DIG, their request was accepted, receipt in Tamil was issued, and photocopies were taken. And still the communications were through interpreters. Despite the fact that acceptance of requests of these women happened, the question is whether the Police followed the protocol stated in the Act.
On February 16, Police officers started visiting houses of these women to inquire about the complaint! The women asked for information and there were no complaints!
Does this mean the Police were misinformed about the Right to Information Act and how to react? Is this is a problem with disseminating right knowledge to the ground level officers from the Police Headquarters?

“But the Police acted with respect to our inquiry and were concerned,” women said.
The Prisons Department in Batticaloa has refused to accept their request. As of to date, the Prisons Department has one Information officer who again is based in Colombo. For requests coming from rural areas such as Batticaloa, the Department only has a complicated process operating from a distance. Clearly many weeks have passed beyond the deadlines stipulated by the authorities to issue information to these women. Surprisingly these women still remain patient.

On one side this story depicts the attempt of victims to achieve justice for their loved ones went missing. On the other hand it also shows the real situation of how the RTI Act operate at the grass root level. For these women, after years of struggle over blood, tears and toil, the RTI Act may be the strongest tool found to seek justice in a country where the right to live is not even cleared stated in the brief paragraph of the country’s constitution that set up conditions for
fundamental rights.

These 13 women are still waiting. They are awake all times to see a positive action to happen and so are we. And so should be the civil society. The awakening rising from pain, anger and injustice never dies.