Home / News / PAKISTAN: The Long March for the recovery of missing persons enters its 20th day after 600 kilometres

PAKISTAN: The Long March for the recovery of missing persons enters its 20th day after 600 kilometres

Many participants have suffered bruised and blistered feet but have not been provided with any medical treatment…..their bleeding wounds have been wrapped with nothing more than pieces of cloth 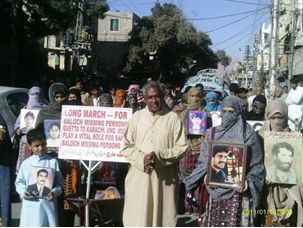 The 730-kilometers Long March of the family members of the disappeared persons from Balochistan has covered more than 600 kilometers and entered its 20th day. The Long March starts each day at 6 am and ends at 6 pm, covering an average of more than 20 kilometers each day. Many participants have suffered bruised and blistered feet but have not been provided with any medical treatment even though some of them can only walk with the aid of sticks. Their bleeding wounds have wrapped with nothing more than pieces of cloth. No philanthropist organizations or individuals have provided ambulances despite several requests from the protesters.

The Long March has started attracting the attention of media houses. However, the coverage is not at all sufficient in the face of the intensity of the issue of disappearances and extrajudicial killings.

The historical Long March will reach Karachi, the capital of Sindh province, on November 21 after covering the remaining 150 kilometers. The protestors will then start a hunger strike in front of the Karachi Press Club for the recovery of disappeared persons and against extrajudicial killings.

One participant, Ms. Farzana Majeed, the sister of a student leader Mr. Zakir Majeed, who was arrested by the security forces in 2009 and has been missing since then told media persons that two years earlier she had confirmation that her brother was alive and under detention by the military at Quli camp. She said her brother was able to send her prayer bead with his name inscribed on them through a person who was released after spending a year in the camp. In 2010 the National Crisis Management Cell, a government body, claimed that Zakir returned home in January 2010 but his family denies this. After receiving the prayer beads the family hopes and prays that he would be released soon.

Ms. Farzana Majeed told the daily Dawn that every day she moves from one city to another setting up protest camps outside various press clubs, attending court hearings and organising rallies in collaboration with the families of hundreds of other young Baloch men who have disappeared. In search of her brother Farzana has knocked on all the doors. Each time she hears about a tortured and abandoned body found somewhere in Karachi or Balochistan, she rushes to the morgue, praying that it will not be her brother. However, with each passing day Farzana’s hope for the recovery of her brother is fading away.

The government of Balochistan and the federal government have not taken any steps to enter into dialogue with the long marchers, including the Voice for Missing Baloch Persons (VMBP), the organizer of the Long March. It looks as it both governments are showing their loyalty to the state security forces who are accused of arresting and disappearing the victims and who are also the main perpetrators of extrajudicial killings.