PAKISTAN: No inquiry into Army lapses in Peshawar school massacre

The smallest coffins can be the heaviest to bear. On 16 December 2014, exactly one year ago, many Pakistani parents had to bear the pain of seeing their children die in a terrible manner. As many as 134 school children of the Army Public School (APS) in Peshawar were massacred on that day, in a shocking act of terrorism. The attack ushered seismic change in State policies and the National Action Plan was immediately announced. However, the 20-point plan has yielded no result a year since its promulgation.

Though one year of this tragic event has passed, no judicial inquiry has been conducted into the security lapse at the Army Public School, which had already received threats before the incident. The incident was the outcome of negligence of Army officials, under whom the school is run, and their irresponsible attitude towards security. Soldiers armed with heavy weapons closely guarded the school building, located within the Cantonment. And yet, the Taliban militants were in the school killing students and staff members for more than half an hour. 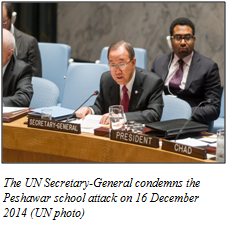 The Khyber Pakhtun Khuwa (KPK) provincial government under Chief minister Pervaiz Khattak is equally responsible for the security lapse and resultant Peshawar carnage because the home ministry of KPK province was pre-warned about the threat on school by intelligence agency.
There are still many unresolved questions. When militants were killing children and staff there were very loud cries and such screaming that can be heard from a distance. But, no one turned up to save the school children. One army contingent arrived after more than 150 children and staff members of the school, including the principal, were killed.

Instead of the Chief of Army Staff conducting an impartial inquiry into the criminal negligence of Army officers stationed in Peshawar City, pressure was put on the government to amend the Constitution and allow for military courts, another slap in the face of the façade of the rule of law and the country’s “independent” Judiciary. The Army refused to target militants unless Parliament approved the constitution of military courts.

After the massacre, parents of the dead children only received corpses and certificates; to date they have not received any compensation. Government officials made promises to provide free treatment to the injured and 2 million PKR in compensation to the bereaved families of the slain students following the attack. But they soon conveniently forgot the pledge made to the victim and their families. The affected families and civil society are demanding help for the injured students. Sadly, parents of the children injured or maimed in the incident were left in a lurch when the Khyber Pakhtunkhuwa government demanded that the parents to pay the treatment costs. The survivors are not getting any special treatment at any hospital as announced by the government; rather they have been visiting different doctors on their own; no government representative has even inquired after their well-being. Even the compensation that few victims received has been insufficient to cover extensive medical and psychiatric treatment.

Though millions of rupees are withdrawn from the national exchequer each year for the treatment of parliamentarians in foreign countries, survivors of the APS attack are denied the right to medical treatment. The psychological impact shall forever scar victims, yet the State has done little for their rehabilitation. After the APS tragedy, funds poured in from different institutions, NGOs, and philanthropists for the rehabilitation and welfare of the students, but there is no tangible evidence of the funds being used for rehabilitation. It is a sorry state of affairs if all such funds meant for the well being of victims of different catastrophes, whether man made or otherwise, end up in the wrong hands. Embezzlement of donated funds is a common practice in Pakistan.

On December 2, four of the alleged perpetrators of the Peshawar massacre were hanged in a prison in the northwestern city of Kohat. This enraged parents who wanted to witness their deaths. The four convicts were tried in military court and their trial was held in camera. Interestingly, all four were said to be members of Toheedwal Jihad Group (TWJ), a little known organization, and were charged with abetment in the APS attack. However, the fate of the actual attackers and their whereabouts are still unknown. Perhaps the government wanted to appease the protesting parents of the victims, who are demanding justice and inquiry into the deadly incident. One of the parents reportedly stated to Dawn newspaper, “the entire nation wanted to see these animals hanged publicly so others would not dare follow their example”.

Shuhada (Martyrs) Forum, a lobbying group of parents of the victims has demanded a fact-finding inquiry commission headed by a senior judge to probe the incident. The Forum has also called upon the government of Pakistan to make the findings of the commission public.

The government of Pakistan has failed to ensure the security of people, including the children, from attacks by terrorist organizations. It has particularly failed to take effective action against the military’s failure to protect citizens from such attacks. Despite numerous continuous attacks on citizens by terrorist groups, the government has failed to bring any of the senior members of the military to task, for the failures of the military to provide effective protection to citizens.

The school, where the attack took place, is situated within a military compound and where there is heavy military presence. Observers have already raised many questions regarding how such an attack could be carried out without the knowledge or connivance of members of the military. Therefore, in confronting the present situation, the primary duty of the government and the Parliament is to question top ranking military officers for failing to prevent this terrible massacre of innocent children.

The government of Pakistan must ask the Chief of the Armed Forces for the reasons for the lapse in security. The Army Chief should be made accountable to the civilian government on this gross negligence and resultant failure to protect innocent lives. Criminal charges must be brought against responsible military officers for security failures relating to this massacre.

The AHRC urges the government of Pakistan to provide free medical and psychological treatment of victim children and teachers of the APS attack; moreover, AHRC reiterates the demand of the parents to issue certificates to APS children victims, with the aim of ensuring employment opportunities on a priority basis on the completion of their study.