Home / News / PAKISTAN: The AHRC takes the greatest pleasure in congratulating Malala for being awarded the Nobel Prize

PAKISTAN: The AHRC takes the greatest pleasure in congratulating Malala for being awarded the Nobel Prize

Malala Yousafzai; the epitome of the fight against religious oppression of women

The Asian Human Rights Commission takes the greatest pleasure in congratulating Malala Yousafzai on the occasion of being awarded the Nobel Prize for female education.   Malala in her struggles which she began as a child, defied religious extremism of the worst kind in Pakistan and continued to demand that girls be allowed to receive education for which demands she was shot in the head by a Taliban gunman in 2012. Malala miraculously survived the cold blooded assassination attempt and continued her tireless efforts to be the voice on behalf of all women to claim the right to an education. 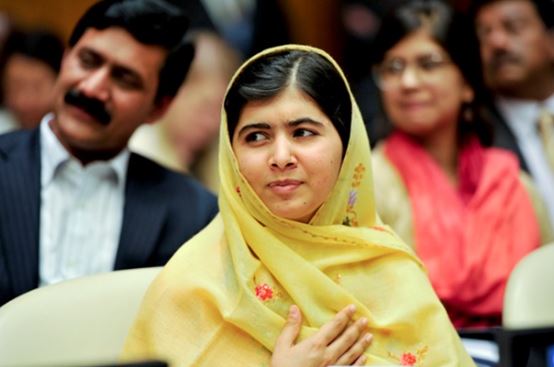 Today, Malala is no longer a lone voice in the fight for women’s education and religious extremism. The world stands with her, in her struggle and fight to win education for women in Pakistan. The Asian Human Rights Commission while congratulating her on her unparalleled achievement, believes that Malala will gain more strength and commitment towards continuing the struggle for women’s education and their rights not only in Pakistan but throughout the world.

It’s a rarity in the Pakistani society specifically for girls to stand up for the rights of others let alone speak for themselves. Malala is an exception to that rule. A rule imposed by a male dominant society that believes in subjugating and oppressing women as a mean of proving manhood. Malala’s courage and valor has today inspired many to carve a destiny for themselves. The journey of the youngest Nobel laureate was unlike many teens her age, from a very young age she had the passion that ignited her resolve to fight against the extremist elements. In 2007 the Taliban literally took hold of the Swat valley – a pristine tourist destination in the Khyber Pakhtunkhwa Province of Northwest Pakistan – and passed an edict banning girl’s education. Hundreds of schools were blown up as a result. Malala then only 10 year old, writing under a pseudonym Gul Makai, chronicled her experience of living under Taliban rule, her diary was later published by the BBC’s Urdu Service. 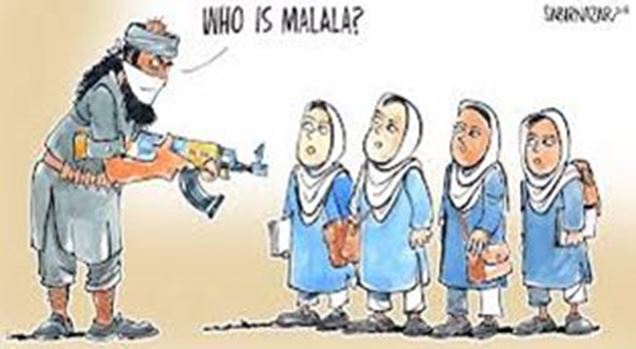 A basic human right, the right to education is a privilege for many children in Pakistan. Malala stood as a symbol of that fight against oppression and tyranny in the name of religion. Refusing to bow down to the whims and fancies of only a few obscurantists’ view of Islam Malala risked her life for the cause of girl’s education; she was shot in the head by two men who stopped her school van. She was easily identifiable as she was the only one not covering her face. In a patriarchal society the twisted norms dictates that a good woman is one who suffers in silence and endures every hardship meted out to them without complaining. A society where birth of a girl is neither celebrated nor acknowledged, girls find themselves at the mercy of their fathers or brothers who are considered as a ‘demi Gods of their fate’. Malala was fortunate to have a father who understood the paradigm of genders and encouraged her to break free. Mr. Ziaudin Yousafzai is his speech at Ted Talk 2014 said “Why is my daughter so strong? Because I didn’t clip her wings.” Mr. Ziaudin a visionary educationist in his own right told the rapt audience “I taught my girl students, to unlearn the lesson of obedience. I taught my boy students to unlearn the lesson of so-called pseudo-honor.”

Malala has since, won 16 major international awards for her service to human rights and justice before winning the Nobel Peace Prize this year. In 2011, Malala was one of the five nominees chosen out of 98 children that were put forward by organizations and individuals from 42 different countries for the consideration of the Nobel Peace Prize selection committee. Archbishop Desmond Tutu, himself a Nobel Peace Laureate, announced the five nominees for the International Children’s Peace Prize in 2011 in Cape Town. The prize is an initiative of the Dutch organization ‘Kids Rights’ and was launched during the 2005 Nobel Peace Laureates’ Summit chaired by Mikhail Gorbachev. That year, Michaela Mycroft (17) from South Africa was awarded the Children’s Peace Prize. Today Malala is the youngest ever Nobel Prize winner.

Malala, is the second Pakistani after Dr. Abdul Salam to have brought the accolade home. Dr. Salam was never given the due respect he duly deserved his only crime was being anAhmedi. Despite the fact that many research centers around the world in physics were named after him not a single street was named after him in Pakistan. The shining star of physics as he was hailed by many, making quantum physics a household name, Dr .Salam is a nameless soldier in the annals of Pakistani history. Malala too elicits a mixed response from the masses in Pakistan who are divided in their views about her as a champion of human and women’s right or a media darling who wish to malign Pakistan as an extremist state harboring the Taliban. The increasing Talibanization and intolerance for dissent has eroded the moral fabric of the society that has been the birthplace of luminaries like Bullah Shah, Sachal Sarmast, Moinudin Chisti and other sages who preached an egalitarian  social order where love breads.

Over the past decades in Pakistan, many attacks have been carried out by orthodox forces on students, educational institutions and academic staff. A series of terrorist attacks on school buses, students, teachers, and institutions took place in Pakistan in order to create a serious fear among the youth of getting an education. Fundamentalist groups oppose education since it provides people, young generations especially, with powerful means for intellectual independence, social advancement and personal emancipation. Fundamentalists use the weapon of terrorism as a tool to stop Pakistani young people from getting a secular education, through which they can potentially develop alternative reasoning.

They have not only targeted institutions, but also individual teachers and university students. In a recent attack on a university in June last year, fourteen female students were killed and another twenty were injured when a female suicide bomber from the religious terrorist group Lashkar-e-Jhangvi blew herself up, in a bus in Quetta, Balochistan.

Malala, raised a lone voice rose in the world to draw attention to the plight of thousands of men, women and children who were being exploited and abused at the hands of the mighty. She rose where many feared, feared for their lives, she spoke when speaking was a crime, she struggled when it was punishable for women to be seen in public she was not a common teen she was a warrior like the Pakhtun freedom fighter Malalai of Maiwand she was named after. The Talibans failed to silence her and she went on to become the symbol of struggle for girls right to education. She has been extolled for her persistence and fortitude by many politicians, celebrities and human rights activist who believe in equal rights for all, regardless of gender, creed or race. In December 2012, Pakistan and UNESCO unveiled the Malala Plan, which aims to have all girls in the world attend school by the end of 2015.

While speaking at the UN General Assembly Malala said;

« INDIA: Raid of Forward Press office is attack on freedom of expression