Home / News / PAKISTAN: Where are the 8,363 Balochis arrested in the last nine months?

PAKISTAN: Where are the 8,363 Balochis arrested in the last nine months? 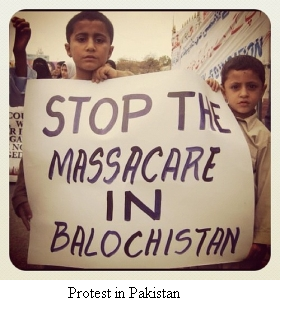 The Interior Ministry of Baluchistan has recently stated that it has arrested 8363 Baloch over the span of 9 months. Whereas, the Chief Minister of Balochistan Dr. Malik Baloch has said that those arrested will be dealt in accordance with the law.

No further details pertaining to the arrested have been revealed.

The provincial interior minister told reporters at a press conference that 1,800 targeted operations were conducted in the Province between December 2014 and September 2015. The Minister attributed the rise in targeted operations to implementation of the National Action Plan.

Approximately 204 “militants” have been killed while 29 have been injured in the operations according to official statement. However, the State has remained tight lipped about who these militants were and are and which law enforcment agency has been involved in the killings and arrests. Last year several human rights organisation estimated the number of missing persons to be 8,000. The statement made by the Chief Minister corroborates this fact.
Disappearances have come to dominate political discourse in Balochistan. However, while the search for missing persons continues, their cases have been complicated by gross discrepancies in the record. For instance, according to a 23 July 2014 report, the provincial Home Department stated that only 71 people are missing in the Province, while human rights organizations estimate that the figure is close to 8,000.
The Voice for Baloch Missing Persons (VFBMP), an advocacy group, insists that more than 19,000 Baloch political activists and sympathizers have been subjected to enforced disappearances over the last 13 years. VFBMP Vice-President Mama Qadir told The Express Tribune on July 23, 2014, “There are more than 19,000 people who were subjected to enforced disappearance in Baluchistan and none of them have been recovered yet. The Government has done nothing, except to release those who were detained for a brief period.” He added that his organization had submitted a detailed report to the United Nations with evidence regarding missing persons.
Significantly, on 12 January 2015, the Pakistan Supreme Court directed the Federal Government, through Attorney General Salman Aslam Butt, to submit comprehensive data within 10 days, regarding the number of missing persons in the country.
Balochistan’s former Chief Minister Sardar Akhtar Jan Mengal, has, in a statement to the Supreme Court, claimed that the current civil disturbances in Balochistan are a direct result of enforced disappearances.

Nawab Akhter Mengal of Balochistan National Party has criticized the media in strong terms during a press conference. He lamented the fact that the troubles of the Baloch people are not worth as much coverage as the cattle show on display over electronic media these days. He said that the media glosses over the trouble brewing in Balochistan and that it is deplorable that State atrocities against Baloch people are overlooked and never discussed openly.

The unbridled power and complete State impunity guaranteed to law enforcement agencies by draconian laws such as Protection of Pakistan Act and the amendments made in the Constitution have made redressal of grievance for the victims of enforced disappearances an impossible feat. Human rights and equality before law have been tossed out the window. The dumping of corpses of missing persons continues at an unprecedented rate. The kill and dump policy of Pakistani security forces continues to rise with deployment of more troops and military operations across Balochistan.

According to Voice of Baloch Missing persons (VBMP), the Pakistani security forces have started dumping the bodies of Baloch persons, previously abducted during operations, claiming that they were militants killed during battle. Whereas, VBMP have these persons listed as missing for the past several years.

Despite the arrests, it is unfortunate that the authorities have been unable to curb sectarian violence against the Hazara Community. Since the beginning of this year, the community has lost 19 members to violence. The highest number of casualties in a single day occurred on 7 June 2015 when unidentified armed assailants opened fire at five Hazara Shias in Bacha Khan Chowk area in Quetta.

Enforced disappearance and the State’s ‘kill and dump policy’ has caused mistrust between the general populace of Balochistan and the Federal government, prolonging the insurgency. The State’s strategy of creating and supporting Islamist extremist groups to manage domestic political challenges has enormously aggravated the problem in Balochistan. The limited gain, in terms of a marginal reduction in indices of violence, consequently, offers little hope of a sustainable improvement in the Province.