Human rights defender and philanthropic educator Shahed Kayes knew there were serious risks involved in his work. He had to, as nothing in Bangladesh comes without associated risks. He knew that his attempt to educate impoverished children from the low castes was unacceptable to the deeply entrenched local power structure and those at the top of it, as schooling can lessen the abundant supply of uneducated labour at their disposal. He was also trying to stop illegal sand-mining, a crime that threatens the very survival of the Meghna river communities. The sand mafia was bound to be irked. 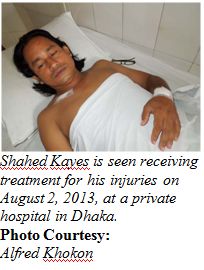 That is why the only thing surprising about him being attacked on the July 25th was the brazen way it was done and the impunity it came with. Shahed was kidnapped from a boat while sailing towards Ramprasader Chor Island by thugs who arrived by motorboats.  The assailants were not bothered about the fact that Shahed was with an American Peace Fellow and several others. They tried to force everyone into their motorboats and only spared the others when Shahed agreed to go with them without resisting in exchange for their safety.

He was then taken to a nearby island on the river named Faraji Kandi where over forty joined the abductors. Shahed was brutally beaten with rods and sticks before being stabbed in the neck and slashing his left wrist. The abductors were intent on killing him. They cursed at him for “fighting against us,” and making them lose “a lot of money because of your movement.” Shahed recalls one of them saying, “We made the mistake of not killing you before.” “This time we will kill you. We will cut the arteries on your wrists and legs, tie your hands and feet together, and throw you in the river.”

Shahed, though, proved to be lucky this time because of the timely intervention of local journalists alerted by the American Peace Fellow. They, through considerable effort, got the Sonargaon police to rescue him.  The Superintendent of Police of Narayanganj immediately alerted his counterpart in Comilla and requested them to save Shahed’s life and arrest the perpetrators. Comilla Police then reached the spot and rescued Shahed. They only arrested one of the assailants, seemingly under the influence of local Member of Parliament, a retired Major General of the Army. The way in which criminals operate with impunity in Bangladesh is exposed by the brash admission of the MP, who asserted that his men had not wanted to kill Shahed and he had ‘scolded’ them for their misadventure.

Shahed was taken to a private hospital in an unidentified location, as his security in a public hospital could never be guaranteed with that politician at the helm of affairs in the district. The MP is still trying his best to find the location where Shahed is getting treated, claiming to want to ‘talk to him’, but many strongly suspect that Shahed would be killed if he is found.

Shahed, an engineer by training, has been working to provide schooling to underprivileged children condemned to live in thatched huts along the banks of the river. He started a ‘boat school’ for the children of so-called ‘water gypsies’ (people belonging to a low caste with no fixed addressed, who get heavily discriminated against in Bangladesh) out of his own money earned by selling his ancestral land before getting supported by some nongovernmental organizations. He is also the Narayanganj district coordinator of the ‘Save the Environment Movement’ (Paribesh Bachao Andolan, POBA).

Shahed’s work has earned him a lot of goodwill among the underprivileged communities living off the Meghna river. He has represented the community in writ petitions filed against the government under Article 102 of the Bangladesh Constitution, concerning fundamental rights (as defined under Part III of the constitution)[1]. He is a figurehead in the fight against illegal sand extraction which has led to acres of lands from Mayadip island eroding into the river Meghna throughout the year 2012 and thus seriously jeopardizing the community. Shahed, together with the community members, organised several protest rallies in Mayadip, Sonargaon, Narayanganj and the capital city Dhaka. The continuing struggle has caught the attention of both local and national media and they have published a large number of reports on the situation.

The struggle has also led to the High Court taking action in the case and it instructed the Deputy Commissioner of Narayanganj to come to the area and form a committee named Illegal Sand Extraction Prevention Committee at Mayadip-Nunertek, Sonargaon. Shahed Kayes was made the Chief Advisor of the Committee. The decision severely hurt the illegal sand miners and cut their earnings from the lucrative trade and this is why they deployed every possible method, from threats to fabrication of criminal charges against Shahed and other activists, in order to stop them.

When these strategies failed, the sand-miners started attacking activists of the anti-sand-mining movement directly.  In one of the most serious incidents, which occurred in August 2012, hired thugs went into the villages of the fisherfolk and attacked their families. They did not spare the elderly, women and children in those attacks, which took place across Mayadip Island.  The armed squads of the sand mafia also stopped fishermen from fishing in the Meghna river on many occasions and brutally assaulted them.  Several of the activists were jailed under fabricated charges filed by the sand mafia.

The attack on 25 July was not the first attempt on Shahed’s life. One of these attacks came on 3 September 2012, when the sand mafia tried to abduct him along with the Assistant Commissioner (AC) of Land of the Sonargaon sub-district when they were on a court ordered visit of the area to assess the problem. The perpetrators surrounded the AC’s speedboat in the middle of the Meghna river for more than two and half hours and left only when a large contingent of police arrived.

It is in this respect that the attempt to kill Shahed assumes such importance. The mafia’s success would not only affect Shahed but would in fact end up silencing the entire community. Knowing that Shahed is out of the equation for at least a while, the sand mafia is already preventing the fishermen from fishing in the Meghna River. Attacking Shahed, a leader in the movement for the rights of these communities, has been a demoralizing blow.

The only way to save Shahed and the community is speaking up for them. It is high time we force the federal government to provide them security and prosecute those responsible for attacking him. Shahed’s life is still in danger and he continues to get medical treatment in hiding. The MP has brazenly admitted to journalists that his thugs carried out the attack and the only ‘justice’ in this case of attempted murder is an alleged ‘scolding’ from the MP to his thugs.

PHILIPPINES: Transport leader murdered for exposing corruption in the government transport board »