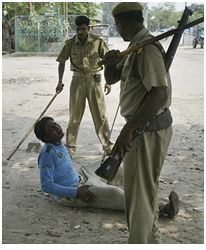 Yesterday the world celebrated the International Day in Support of Victims of Torture. Ironically, it was also yesterday the Government of Kerala reinstated nine police officers to office following their suspension for suspected involvement in an infamous case of custodial torture and murder. The case is still under investigation by the Central Bureau of Investigation (CBI). The case of Sampath’s murder is well known also because of the death of an investigating CBI officer, Mr P. G. Haridath, who was reported to have committed suicide on 15 March 2012. His suicide note accused state police and a magistrate of illegally attempting to influence the investigation. These allegations have yet to be properly investigated.

Sampath died in police custody. An autopsy revealed 64 ante-mortem injuries (wounds inflicted prior to death). The state government suspended police officers accused of torturing Sampath in custody and killing him. The reinstatement of these same officers yesterday, which permits those implicated in and not fully exonerated of the murder back into active service, is highly distressing.

Deaths in police custody resulting from the practice of torture are not new or rare occurrences in India. The Supreme Court of India has on several occasions denounced this physical and psychological abuse, ordering the government to take concrete action to prevent such barbarous and criminal acts in its own law enforcement agencies. In the landmark judgement in favour of Raghubir Singh (petitioner) against the State of Haryana (respondents), the Court held that “[w]e are deeply disturbed by the diabolical recurrence of police torture resulting in a terrible scar in the minds of common citizens, that their lives and liberty are under a new peril when the guardians of the law gore human rights to death. The vulnerability of human rights assumes a traumatic, torturesome poignancy when violent violation is perpetrated by the police … whose function is to protect the citizen and not to commit gruesome offences against them as has happened in this case. Police lock-up, if reports in newspapers have a streak of credence, are becoming more and more awesome cells. This development is disastrous to our human rights awareness and humanist constitutional order. … [t]he State, at the highest administrative and political levels, we hope, will organise special strategies to prevent and punish brutality by police. Otherwise, the credibility of the rule of law in our Republic vis-a-vis the people of the country will deteriorate …” All India Reporter, 1980, Supreme Court 1087.

In a similar case, Kishore Singh (petitioner) against State of Rajasthan (respondent), the Court said “…[n]othing is more cowardly and unconscionable than a person in police custody being beaten up and nothing inflicts deeper wound on our constitutional culture than a state official running berserk regardless of human rights”. All India Reporter, 1981, Supreme Court 625.

Three decades since, the conditions of custody, most particularly the practice of torture, have not improved, and continue to alarm many across India and the world. The proposed Prevention of Torture Bill of 2010 has been shown grossly inadequate, yet is still being considered by the parliament. The Parliamentary Select Committee that reviewed the proposed law has suggested comprehensive revisions to the Bill; these recommendations have yet to be taken up. In the meanwhile, the practice of torture, as yet not criminalised, continues unabated.

The Asian Human Rights Commission (AHRC) has documented many cases from India in the past eight years that collectively show consistent and widespread use of torture to intimidate and extract information or a confession. All police stations in the country practice this crude and unscientific method of interrogation and punishment. Most police officers believe that torturing suspects is a legal and morally acceptable means with which to investigate crime. The police training provided to new recruits does not categorically instruct cadets to abstain from use of violence as a means to investigation; rather, the training endorses and promotes the practice of torture. The government of India does not have data concerning the number of officers who routinely resort to torture and under what circumstances such abuse occurs. Because torture is not recognised as a crime, measures toward eliminating such horrifying practices have not been discussed or prioritised.

The yawning chasm between the vast numbers of cases registered against perpetrators and the extremely low actual number of investigations, prosecutions and convictions indicates how politicians and other power holders in India have managed to trivialise and side-line the entire issue. According to the information made available to the AHRC, in only 18 cases nationwide were police officers guilty of cruel, inhuman and degrading treatment acted against. Even in these cases, action was limited mostly to temporary suspension from service. Subsequent reinstatement negated whatever punitive effect the sentence or disciplinary action was supposed to serve – this pattern repeated itself in the Sampath murder case.

It is against this desperately hopeless backdrop that International Day in Support of Victims of Torture was observed. Mr Salman Khurshid, the Union Minister for Law and Justice, who attended a conference in New Delhi yesterday to mark the day, stated that he had no information concerning the status of the proposed law against torture. This year’s theme spoke of the right of survivors to rehabilitation, yet nowhere in India, where torture is endemic, has there been an improvement in the services or facilities dedicated to the recovery and rehabilitation of torture victims, most of whom suffer psychologically, emotionally, physically and financially from the traumatic experience.

But for the reporting of a few select activities by some human rights and social activist organisations, India’s media also neglected the international event altogether. This apathy or self-censorship on part of the media bodes ill for the future of human rights work and for the countless communities and individuals who have fallen prey to mindless, arbitrary and crippling violence. India has yet a long way to go towards acknowledging torture as a crime that cannot and must not be condoned, tolerated or justified by any civilised society. India must recognise that torture is tyranny. India must realise that torture occurs in the dark places sans constitution, culture, civilisation, law and every moral principle. India must realise torture is a practice sans humanity.

WORLD: Torture: Asian and Global Perspectives – A comment from an editor  »