Home / News / WORLD: Torture: Asian and Global Perspectives – A comment from an editor

WORLD: Torture: Asian and Global Perspectives – A comment from an editor

I was amazed at how quickly the pieces of Torture: Asian and Global Perspectives fell into place, turning an idea for a magazine into a quality, finished product. When Nilantha Ilangamuwa, whom I’d previously worked with at the Sri Lanka Guardian, asked me to launch a magazine with him for the Asian Human Rights Commission, I knew I had to be a part of this project. Soon I was seeing articles and interviews from some familiar and well respected names and I knew this had the potential to be something great. Now on June 26th, the 14th annual International Day in Support of Victims of Torture, we’re finally ready to share our work with the world. 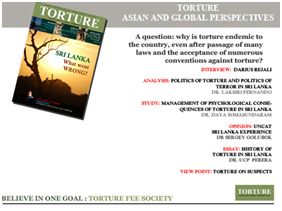 The principle behind this magazine and the general opposition to torture isn’t rooted in the idea that inflicting or prolonging pain on another person is morally wrong. That’s innately understood by nearly all people. It’s why you don’t kick a dog and why the kind animal owner will put down a creature that is suffering, rather than leave it in pain. No, there is a greater cause at the heart of opposing torture. That cause is liberty, the fundamental moral principle that no man may have total and unconditional control of another, that no man should be made to submit to being put in jeopardy of life or limb without due process of law, and that the individual has certain natural born rights that any just law must respect, which include the rights to life and property. It is towards the protection and expansion of liberty – for every member of every class of every society – that we must dedicate our efforts.

I was especially thrilled to work on the June issue, which covered human rights abuses in post-war Sri Lanka. It was during the Sri Lankan Civil War that Nilantha and I met and started working together to cover the conflict. That experience gave Sri Lanka a special place in my heart and has made the continuation of human rights abuses by a consolidated central government a subject of particular importance to me.

In this issue, Torture: Asian and Global Perspectives took an in depth look into Sri Lanka’s relationship with torture. Dr. UCP Perera’s essay on the history of torture in Sri Lanka really helped to establish the context in which to judge the current state of affairs and demonstrated that torture on the island wasn’t born from the Civil War, but has been a moral issue that the Sri Lankan civilization has been battling throughout its existence. This historical context finely complemented Dr. Laksiri Fernando’s analysis of the modern use of torture and terror in Sri Lanka to maintain or gain political power.

Dr. Daya Somasundaram’s academic study of the psychological consequences of torture and various available coping methods illustrated another side of torture, beyond the immediate act, or the politics and other motivations behind it, as well as cataloged what specific kinds of torture tend to occur in Sri Lanka. In the study, Dr. Somasundaram also pointed out one fact that is of particular importance in my mind: that, despite the continued instances of torture, abduction, and extrajudicial killings, the actual rate of human rights abuses has greatly declined with the end of the war. It’s easy to read about human rights abuses in a country and get the impression that things are as rotten as could ever be the case, but it’s important to know the truth of the matter – not to excuse current trespasses, but to understand them in their proper context.

I was also pleased when I learned that Basil Fernando, the AHRC’s Director of Policy and Programs, and a long-time contributor at the Sri Lanka Guardian, would be interviewed for this issue. In that interview, he provided important insights into the fundamental link between torture in a country and the lack of relatively free and transparent government. The necessity of having a strictly limited government and the natural curtailing effects this has on human rights abuses is the sort of big picture point I hope all our readers will take away from this magazine.

About the author: Eric Bailey is a member of the editorial board of, Torture: Asian and Global Perspectives