Balochistan Province continues to suffer the wrath of law enforcement agencies; even by official figures, corpses found are threatening to breach the 1,000 mark in recent years. The real numbers are greater, with violent death scarring the countryside and blotting humanity.

According to official reports, nearly a thousand bullet-ridden corpses have been recovered from various parts of Balochistan in the past six years. Many of these corpses have been unrecognizable, with the faces burnt by the use of acid, a tactic used by the intelligence agencies. The official data also discloses that over 112 persons are still missing in the Province.

It is worthy to note that these figures have been prepared by senior government officials assigned to execute the National Action Plan (NAP) and to cracking down on terrorism and supplement the ongoing anti-terrorist offensive in North-Western Pakistan. The following is the year wise breakup of dead bodies recovered, as per the report: 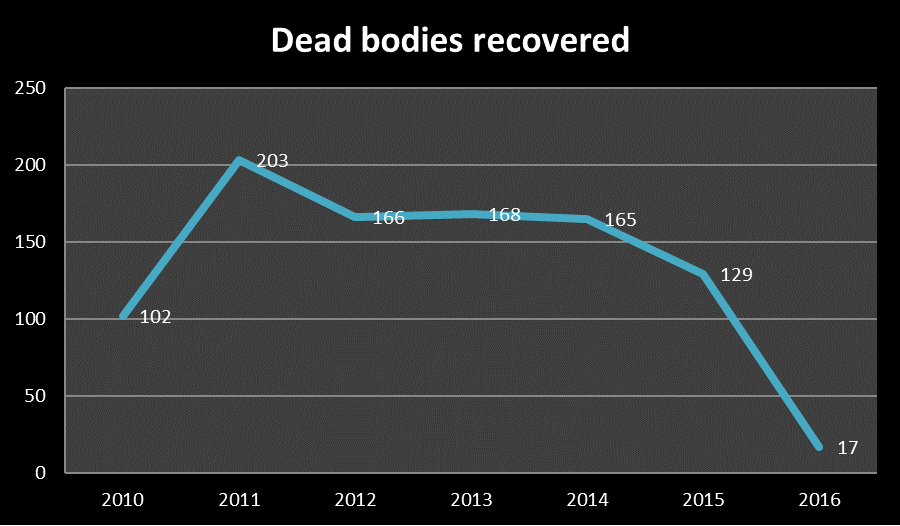 Balochistan Province, rich in natural resources, has been lagging in major economic and social development indicators. Military and civilian governments in Pakistan have been apathetic to the plight of the Baloch, by policy. The Baloch have suffered prejudice time and again and are often viewed as a threat to national security.

Mr. Sana Baloch, ex-Senator from Balochistan, has stated in one of his interviews that “a combination of economic collapse, Talibanisation, sectarian menace, abductions for ransom, near-to-collapsed health and education infrastructures, corruption and brutally mismanaged governance have brought the province to the verge of a Somalia-like situation where the ordinary citizen begs state-backed criminals, gangs and mafias for safety and security. Balochistan is in a political crisis and it needs a well-sequenced roadmap to undo the damage and reverse the cycle of violence in order to prevent further political and human catastrophe or repeat of another cycle of violence in the province.”

The Baloch discontent with State policies is a direct consequence of ill-crafted security centric policies of the State, whereby the masses are left to fend for themselves. Kech, formerly Turbat District, one of poorest districts, has remained, for many years, in the total control of the Pakistan Military, the Frontier Corp (FC).

The people taken into custody are taken to a sub head quarter of FC at Turbat where they are tortured for investigation and then those who are suspected are taken to other unknown places in the provinces. Sometime thereafter, their mutilated bodies are found in deserted locations.

The official figure of arrest of Balochis has been a whopping 9,000, and this number does not include the disappeared. This official figure is obviously a tip of the iceberg.

Provincial Home Secretary Akbar Hussain Durrani stated, on 28 December 2015 that more than 9,000 suspected militants and criminals have been arrested by Police, Levies, Frontier Corps and Intelligence Agencies in Balochistan as a part of the NAP in 2015. He claimed that a total of 1,973 intelligence-based operations have been conducted in Balochistan, to arrest elements involved in targeted killings, bomb explosions, and kidnappings.

The Baloch nationalists have been targeted in all of the operations, while the extremists and religious zealots have been allowed to operate with impunity to divert attention from the Baloch freedom movement. The Ahle Sunnat Wal Jammat (ASWJ) and Lashkar-e-Jhangvi, the proscribed religious militant organisations, both have a green signal from the Pakistani State to carry on without fear.

Human rights defenders have time and again pointed out the vicious designs of the government to perpetuate their authoritarian writ over the people of Balochistan and gain control over the Baloch’s resources by engaging them in war. State agencies deliberately force the Baloch towards militancy, because the State is unable to defeat them on political grounds. They drag the Baloch into the battlefield to crush them.

The recent Quetta blast was an attack on intellectuals, with the aim of eradicating those that give voice for Baloch people. The attack will herald another round of operations, further alienating the Baloch. The common perception amongst the people of Balochistan is that the State has utterly failed to protect them, as it is only interested in saving the China-Pakistan Economic Corridor (C-PEC).

The security forces wanted to punish the indigenous population that is opposing the building of C-PEC. The Baloch fear they will become a minority in their own Province. The fact that the State, instead of opting for dialogue to solve the issue, has adopted a security-centric approach to squash resistance; this has further eroded their trust in the government.

Enforced disappearance and the State’s “kill and dump policy” has caused mistrust between the general populace of Balochistan and the Federal government, prolonging the insurgency. The State’s strategy of creating and supporting Islamist extremist groups to manage domestic political challenges has enormously aggravated the problem in Balochistan The limited gain, in terms of a marginal reduction in indices of violence, consequently, offers little hope of a sustainable improvement in the Province.

« INDIA: Rotten ‘mother tongue’ of Kerala Police must be condemned

PHILIPPINES: DEFEND OUR LIFE, PROTECT OUR DIGNITY STOP THE KILLINGS! »