The mysterious death of 35-year-old Dev Bahadur B.K.on 30 August 2017 seems to involve the Ghorahi Sub-metropolitan police, Dang District. Dev was arrested at around 6 p.m. on August 29 by police officers attached to the Ward Police Station, Ghorahi Sub-Metropolitan. Dev was drunk at the time of arrest, and was taken to the police station in a police vehicle. He was taken to the Lamahi Hospital for a health check-up before being locked in custody. 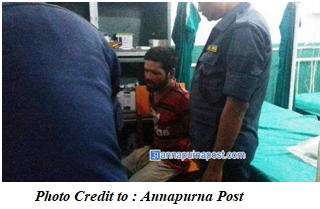 First, his dead body was kept at the mortuary of Lamahi Hospital; however, the police then took the dead body to Ghorahi Sub-regional Hospital. The police handed the dead body to the Environment Department of Ghorahi sub-metropolitan, and it was promptly buried. The quick handling of this incident by the police makes it more mysterious.

Furthermore, on September 1, the Dang District Police Office (DPO) posted on Facebook saying they have come across an unidentified male dead body at Chaupatta Forest of Ghorahi sub-metropolitan. The message mentioned a 40-year-old male who used to stroll around Ghorahi in an inebriated condition. The police message asked the public to identify him and his relatives, and inform the police on toll free number 100, and two other mobile numbers. 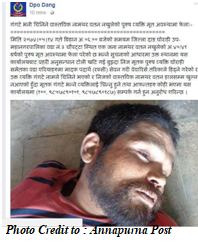 After a photo of the police officers and Dev Bahadur B.K. at the hospital was publicly circulated, the DPO Dang removed its Facebook message. These events suggest a staged scenario and foul play. It seems that the victim died in police custody, and the police have staged a drama to hide their crime. When the rule of law collapses, this is what we can expect from police officers. This incident is no surprise,because the Nepal police have been practicing custodial torture since their inception. The Asian Human Rights Commission has been repeatedly exposing such practices of custodial torture.

A prompt and proper investigation into this case must be initiated. The police officers including Head of Ward Police Station, Police Inspector Suraj Khadka, must be suspended from active duty during the investigation, as there are strong chances of tampering with evidence. The guilty police officers must face stringent punishment, to deter others from similar activities.

« PAKISTAN: The police personnel should be sensitised to gender based violence and other gender issues