In the past few months, the Nepal Police has made its presence conspicuous in the vicinity of the residence of Dr. CK Raut in Rajbiraj, Saptari District. The number of personnel ranges from 2 to well over a dozen, rising when they think Dr. Raut has reason to leave his home. They have placed Dr. Raut under 24-hour surveillance, and to do so, they have rented a house nearby and deployed some female members of the police there too. The police personnel have been doing their assigned job, however this is obstructing day-to-day life of Dr. Raut. Even his family members are living in fear due to constant surveillance.

The police have been intruding into the security and privacy of Dr. Raut’s family. They have been entering the house of Dr. Raut uninvited, anytime, grilling children, women, and senior members of his family, and searching his house without warrant. 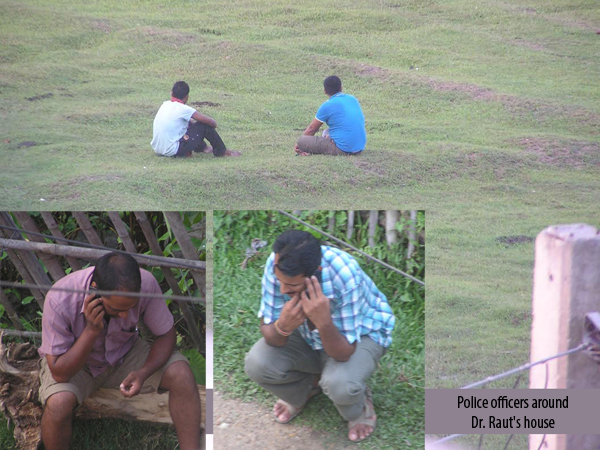 One night last week, at around midnight, female police personnel, and possibly some policemen as well, climbed up on the roof of Dr. Raut’s house, using a neighboring property, to peek through windows into Dr. Raut’s room. It is not known to the Asian Human Rights Commission (AHRC) whether the police interlopers took photographs or recorded film of what they observed. However, what is known is that this act of clambering onto the roof at night to peek through the windows was repeated again this week as well.

The police also keep on circling Dr. Raut’s house on motorcycles at midnight, and past midnight, even up to 2 a.m. sometimes. This behavior of law enforcement is terrorizing the Dr. Raut family, including several senior members, women and children. They sleep in fear not knowing when the police will sneak about to peek through which windows, or intrude into the house from which direction.

Despite the Special Court having given him a clean chit on the treason charge filed against him on 8 October 2014, the police are denying Dr. Raut the most basic freedoms. He has been virtually placed under house arrest, forbidden to speaking to the public, hold a mass-assembly, or even make statements to the press. The last time he managed to come out of his house, somehow, was on June 24, to attend a meeting about foreign aid induced deforestation, migration, and resettlement projects in Madhes/Terai. And, even then, he was arrested at Lahan.

Prior to that, it was on May 26 that he managed to leave his house to be interviewed by Arena Television in Itahari, Sunsari District. On that occasion he was arrested from the interview room before the interview could be recorded, and kept in custody under cruel conditions. In the past, he has been arrested even when going to the hospital (on 2 April 2015), and prevented even from attending funeral rites (on 12 February 2015). The police have even broken his leg during a brutal attack on 3 January 2015 in Biratnagar. In another violent police crackdown on 4 April 2015, his head and arms suffered serious injury. The kind of torture he was forced to undergo in police custody, led him to undertake a fast-unto-death (from 21 September to 1 October 2014).

In addition, almost a hundred Madhesi activists have been injured in police suppression in the last few months; the police have filed more than a dozen fake public offence cases against the activists for supporting Dr. Raut. Dr. Raut’s supporters are being regularly harassed and tortured by the police.

Dr. Raut has also received dozens of serious death threats, even from government-registered organizations, which have officially issued death threats on their letterheads. However, the government has not taken any measures against those who have made these open threats.

The AHRC strongly urges the government of Nepal to respect Dr. Raut’s rights to freedom of speech, movement, peaceful assembly and association, which are fundamental rights of all human beings everywhere, as also mandated by the United Nations Universal Declaration of Human Rights, of which Nepal is a signatory.

Dr. Raut has been advocating for the constitutional right of secession in the upcoming Constitution and has been seeking an independent Madhes. This advocacy, however, does not justify the government of Nepal using intimidation, threat, harassment, fabricated cases, and violence to deny fundamental rights to Dr. Raut, his family, and his supporters.

The government of Nepal will bear responsibility if anything happens to any of Dr. Raut’s family members from the intrusive activities of the Nepal Police, which include peeking through windows and entering the house uninvited at midnight.