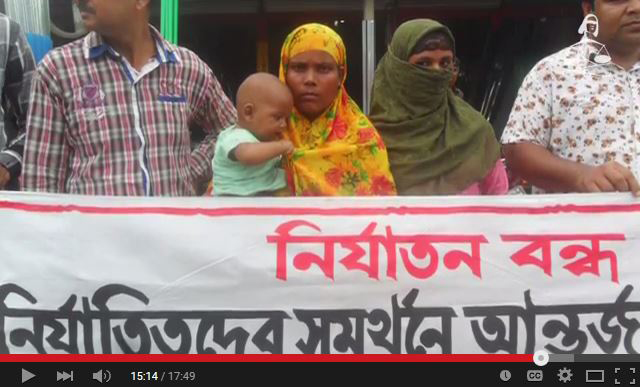 In this week’s Roundup, AHRC TV begins in Sri Lanka where a Sub-Inspector and his assistant have been convicted and sentenced to death for the murder of Gerald Perera in 2004. The verdict finally came after 10 years of indictment. Another case of torture conducted by the same Sub-Inspector and several police officers of Wattala Police Station is also being currently examined. AHRC TV interviewed Gerald’s widow Padma, who has been fighting for justice for more than a decade.

Next in the programme, AHRC TV turns to the story of 14 student activists arrested in Thailand for holding a peaceful anti-coup rally. They were protesting for the end of military rule and for the return of democracy. The students are currently facing charges of alleged sedition and for allegedly violating the ruling junta’s ban on political assemblies. Each student, if convicted, could face up to seven years in jail. AHRC TV interviewed Right Livelihood Award Laureate Susil Sivaraska on his views on the situation.

In Indonesia, various events were held on June 26 to commemorate International Day in Support of victims of Torture. The AHRC, along with The Commission for Disappearances and Victims of Violence, organized two days of public events in Jakarta. The seminar hosted by the two organizations drew around a hundred participants including torture victims, journalists, and human rights activists.

Torture day events were also observed in the Pakistani cities of Karachi, Lahore and Haripur. The events attracted many parliamentarians who deplored the fact that despite ratification of UN’s Convention Against Torture, Pakistan has still not enacted any law to discourage the torture in custody. AHRC interviews intern Javeria Younes about the events on June 26.

In its final story in this week’s Roundup, AHRC TV reports on events in Bangladesh. Dozens of victims of torture and their families have taken to the streets in many district headquarters to demand justice against unjust treatment by law enforcement officers. Many prominent human rights defenders and jurists also participated in a discussion at the National Press Club in Dhaka.

The bulletin can be watched online at AHRC TV YouTube. We welcome both human rights feeds to be considered for weekly news bulletin, and your suggestions to improve our news channel. Please write to news@ahrc.asia. You can also watch our Weekly Roundup on Facebook.