Home / News / INDONESIA: Serious violations of human rights in Papua should be investigated

INDONESIA: Serious violations of human rights in Papua should be investigated

The Asian Human Rights Commission (AHRC) urges the Indonesian Authorities to ensure that cases of human rights violations that occurred in Papua must be investigated properly, under fair trial principles and the Rule of Law. In the last two months, the AHRC has documented and reported some three cases of serious human rights violations, as follows: #1. Ruthless shooting and violence committed by the Paniai Police Mobile Brigade in South Tigi District, Deiyai Regency, resulting in the death of one indigenous Papuan; #2. Cruel assault of 15-year-old Albert Nawipa, an indigenous Papuan teenager; #3. The torture of Mr. Niko Hisage, an indigenous Papuan. He was assaulted by Army personnel from the sub-district military command of Wamena city. 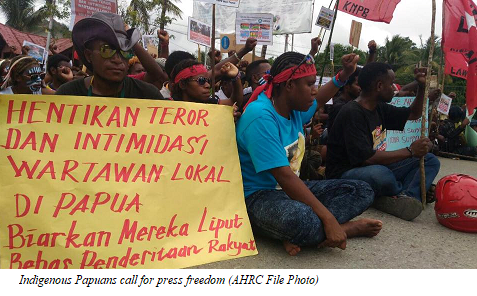 In addition, the AHRC very recently documented and reported the case of arbitrary arrest and detention of Mr. Yanto Waine, a member of the National Committee for West Papua (KNPB). He was illegally detained in the Nabire Police Station (Polres Nabire) after distributing statements on the street. Besides this case, the AHRC also notes the forced dissolution and arbitrary arrest of 29 Papuan student activists. They were brought to the Yogyakarta Police Station after conducting a peaceful protest. They were denouncing the New York agreement concerning the legitimacy of the 1969 Referendum in Papua. It resulted in Papua’s becoming part of the Republic of Indonesia until the present day. There were 32 student activists in Jakarta and 46 student activists in Semarang who were also arrested for holding peaceful protests. Despite the fact that they have been released without criminal charges laid on them, the illegal arrest and forced dissolution had the following effect. It caused trauma by breaching the Rule of Law and the Principles of Democracy. Indonesia, in its Constitution, has recognized democracy and the freedom of opinion.

The AHRC has learned about and monitored the criminal justice system in Indonesia, in this case, Papua. To put it simply, it does not really function. Human right cases and even alleged gross violations of human rights such as the Paniai case remain unaddressed. On the contrary, the Government under President Joko Widodo is mainly concerned about infrastructure and economic development in the country. Local indigenous Papuans, on many occasions, have questioned this limited development focus. Does this development increase the living standard of the ordinary Papuan, or does it foster the expansion of multi-national corporations and mining exploitation in Papua?

So far, the Government does not have a strong policy of human rights protection in Papua. It tends to simplify problems. An example would be the statement by Mr.Wiranto the Coordinating Minister of Politics, Law and Security (Menkopolhukam). After a vicious shooting by the Police in Deiyai Regency, and without proper investigation, he stated through the Media, that the case was not one of a violation of human rights. Of course, this kind of utterance undermines the legal standing of victims seeking justice and redress. In the Papua, Deiyai Regency shooting incident, the Police used lethal force. They attacked indigenous Papuans, resulting in the death of one man and injuries to at least ten other indigenous Papuans.

Massive and frequent human rights violations in Papua are caused by the security approach used. The Government had been reluctant to evaluate and audit the present Security Forces in Papua. The AHRC also learned that since Papua had been divided into two Provinces namely West Papua and Papua, the number of security forces increased due to the development of new military offices and facilities. Media and public access to Papua is still difficult, especially in remote areas. President Widodo had declared that the international media were allowed to enter Papua but, in fact it is very difficult to obtain the required permit. This matter had become a serious concern of the World Press Freedom Day Conference, held in Indonesia recently. Many journalists who attended the event questioned the Police concerning press freedom in Papua. Lack of journalistic access to Papua is worsening the human rights situation in Papua.

Therefore, the AHRC calls on the Government and Law Enforcement Agencies to seriously and promptly investigate the cases of human rights violations which took place in Papua. The Government should not hide behind the focus of infrastructure and economic development. Infrastructure and economic development will be nothing without law enforcement and justice. It is clear that Papua is waiting for justice, waiting for a serious Indonesian Government to take on the pending human rights cases guaranteeing human rights protection for Indigenous Papuans.

On August 17, 2017 Indonesia is celebrating 72 years of independence from Dutch colonialism. The Government should reflect that 72 years is more than enough to ensure that the State / the Government is present at ground level to protect its citizens, including indigenous Papuans. In order to protect human rights, law enforcement must be carried out, legal certainty should be presented, impunity must go, and no further recurrences of the same crimes.

SRI LANKA: Torture and fabricated charges by Mahiyangana Police with the view of land grabbing »