Home / News / PAKISTAN: The practice of fake police encounters exposed through a live video recording by the media

PAKISTAN: The practice of fake police encounters exposed through a live video recording by the media 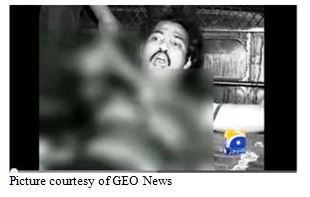 The citizens of Pakistan watched a video recording of a police encounter on all the television channels where a man who had been pronounced dead started crying and screaming that he was alive. The police ignored his cries for help and dragged him by the hair into a police van. He was taken to a mortuary and thrown in the morgue along with three other accomplices. The ‘dead man’ continued to cry out for some time, begging for someone, anyone, to save him inside the morgue, but no one came to his assistance. In fact, his life could have been saved if the police had admitted him to a hospital which was just ten minutes away from the location where the fake encounter occurred.

On May 12, the police claimed that they had raided a house in Badami Bagh, Lahore, the capital of Punjab province where some robbers were hiding. The police used one suspect, Sarfaraz Ahmed Jhangvi, as an informer to show them the hide out. The police claim that at the time of the raid the robbers opened fire at the police and in retaliation the officers returned fire. As a result of the shootout all three robbers along with the informer, Sarfaraz Jhangvi, were killed. However, the family members of the victims claim that the accused persons had already been in the custody of the police and that the officers brought them to the location of the encounter in the late hours of Monday evening and killed them. The residents of the community stated to the media that they had heard the shots and had been instructed by the police to remain in their houses. After some time they watched as the police started moving the bodies to their van.

Anyone watching one of the videos (as seen here) can plainly see that Sarfaraz Jhangvi was still very much alive when he was being taken to the morgue. The same video also reveals that another of the victims was in handcuffs at the time of the shooting. The cuffs were later removed at the morgue. Sarfaraz Jhangvi can be seen raising his head as he calls for help, a policeman forces his head down. The police party drove directly to a mortuary and dumped Sarfaraz Jhangvi in the morgue along with the others. The official police version is that he died inside the police van while it was on the way to the morgue. Despite the fact that he was obviously alive they police never stated in their media interviews that they were taking him to a hospital.

To back up the claim by the relatives that they had already been in custody prior to the shooting, one of the robbers was in hand cuffs on arrival at the morgue and it was only then they were removed. The police claimed that the four persons were involved in over 300 cases of robberies, rapes and kidnapping for ransom.

Please see the following videos and news links of various media reports in which he can clearly be seen that the ‘dead man’ was begging for help:

After the huge media coverage the Chief Minister of Punjab, Shahbaz Sharif, announced the formation of an inquiry committee to probe the incident but has not taken any departmental action to avoid any interference by the police into the inquiry. Shahbaz Sharif is famous when it comes to police encounters. When he was Chief Minister in the government of 1997 several cases of fake encounters were framed against him by the family members of the victims. The cases remained pending in the courts until 2012 when he, being the Chief Minister, influenced the judges and exonerated himself. The Human Rights Commission of Pakistan (HRCP) has reported that during 2013, 217 cases of extrajudicial killings were reported from Punjab province. This is still the continued practice of instant justice by the Punjab government.

Due to the absence of a proper criminal justice system and the existence of the weak rule of law, the law enforcement agencies, particularly the police, enjoy impunity for not respecting the right to life. The government does not focus on the rule of law but rather the maintenance of what they consider to be law and order. This has created the problem of continuous fake encounters which result in the killings of innocent people.

The police and law enforcement agencies (LEA) have been given authority to violate the dignity and respect for the right to life of the citizens. Through the impunity the LEA have been given full protection for the illegal acts and supra constitutional methods. In Pakistan there is no longer any obligation for anyone with a criminal charge to be entitled to a fair trial and due process.

The government, instead of reforming its criminal justice system to enable speedy trial, fair investigation, and proper prosecution, has given inordinate power to police, military, and other law enforcement agencies to restrict fundamental rights of the people in the name of fighting crime.

The Asian Human Rights Commission (AHRC) wishes to remind the government of Pakistan that international human rights law requires that police killings are thoroughly investigated, and that the police officials responsible for unlawful actions are prosecuted and convicted. The AHRC also urges the government to form a high judicial powered commission to probe the instances of fake police encounters, particularly in Punjab province, where this has reached epidemic proportions. The government of Punjab finds it easy to resort to encounters and terrorising the whole society in order to keep them under control.

The AHRC praises the courageous cameraman who took this video.

NEPAL: Recently passed Truth & Reconciliation Law is a mockery of the rule of law and transitional justice process »