Home / News / INDIA: Violence is no means to resolve conflict in Manipur

INDIA: Violence is no means to resolve conflict in Manipur 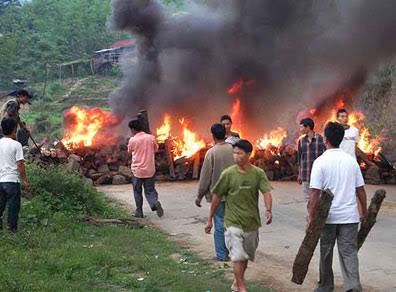 Amidst claims and counter claims related to the recent militant attack on the Indian Army, as well as a retaliatory strike against militant groups by the Indian Army, lives have been lost in Manipur. The Asian Human Rights Commission (AHRC) condemns the use of force with impunity by state and non-state actors in Manipur that has claimed thousands of lives so far, rendering children orphans, women widows, and parents childless.

During the past 64 years of independence there has not been a single month in Manipur where lives have not been lost to insurgent and counter insurgent activities. Set aside the claims of politics and strategy and the actions that have followed these claims by state and non-state actors. The fact is Manipur is in a state of constant violence. And, violence is no means to achieve political goals.

India is known as a nation that has achieved independence and self-rule, earning dignity and respect, from a 200-year-old colonial invader through non-violent means. The single largest lesson the independence movement can continue to teach India and the world is that peaceful means of protest is much more powerful and effective than violence.

So far, the Union Government has only achieved intermittent periods of peace from armed insurgency and counteraction by State forces. This is largely because of fractional and shortsighted negotiations that the government has resorted to in Manipur and the politics of appeasement and violence the militants groups have chosen. In the process militants and the state forces have suffered serious casualties.

On one hand, militant groups operating in Manipur have repeatedly resorted to violence against innocent civilians. This includes, abduction of minors, drafting of youngsters into armed groups by threat and intimidation, torture and other forms of cruel and inhuman punishment, extortion, and other forms of violence including explosion of improvised or crude explosive devices in public areas, injuring civilians and state officers.

On the other hand, the Indian armed forces, along with the state police, has engaged in extrajudicial executions, torture, fabrication of charges against innocent civilians, and other forms of wanton misuse of authority, like conducting house searches at midnight as well as committing crimes involving sexual violence. Such acts of violence by the Indian armed forces has reached such a stage that the Assam Rifles, a paramilitary body, now has condoms included in their standard carryon field kit.

Militant groups, particularly those with operational headquarters located deep within Burma, are actively engaged in drug and human trafficking in the region. To facilitate the trade, militant groups have made clandestine pacts with corrupt officers in the Indian armed units. Infighting between business partners in this narcotics trade has also resulted in violent incidents where innocent persons have been killed or seriously injured.

The state administration in Manipur is notorious for its corruption and for its incapacity to administer the state. It is believed that the corrupt politicians and police officers within the state administration have played an important role in ensuring the continuity or escalation of the armed conflict in the state, and that countering armed conflict is an excuse to syphon financial support from the Union Government for which there will be no accountability.

Caught in between this saga are the innocent people of Manipur who have suffered perhaps the worst in independent India; their suffering is comparable only to that of the people of Kashmir. Armed conflict in other states of India, including six other states of the North Eastern region and the states affected by ultra leftist movements, has never had continuous six decades long violence, as has been the case in Manipur. It is time Manipur finds a way, through peaceful negotiations, to end violence.

The Indian state has no reason to act with impunity in order to handle a political conflict that has resulted in an armed struggle. Insurgent groups also have no excuse to resort to violence against their own people and the Indian state as a means to achieve their political goals.

Armed insurgency in Manipur is the reason the Indian state has so far upheld the enforcement of the draconian legislation, Armed Forces (Special) Powers Act, 1958, in Manipur. The fallout of the implementation of this law in Manipur has resulted in thousands of deaths, of which no one has an exact count.

The continuation of armed violence in Manipur will further reduce the narrow space for dialogue between the Indian state, and the indigenous movements in Manipur that demands autonomy for the state and its people. It will provide excuses for the Union Government to extend the operation of draconian legislations like the AFSPA.

Violence, particularly when political groups that claim allegiance to the Manipuri cause of dignity and non-discrimination resort to it, has weakened the voice of Manipuri civil society. Violence committed by both sides has not achieved anything other than fear, aversion, and death in Manipur. Two generations of Manipuri people are victims to this cycle of violence, uncertainty, and oppression.

« NEPAL: Reform the police, rather than outsource policing