The 30 July 2013 announcement of the Congress Working Committee decision to create a separate Telangana state within the Union of India spurred other statehood demands. In Assam, ethnic groups like the Bodos, Karbis, Dimasas, and Koch Rajbonshis – which have all been fighting for separate states for themselves – unleashed serial agitations and economic blockades to intensify their demands. This fuelled prevailing friction along ethnic lines; tension turned into violence and the result has been large-scale displacement. 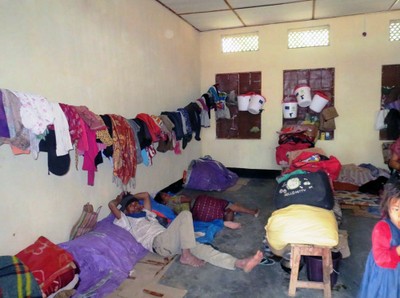 December 2013 witnessed another episode in the history of displacement in Assam. More than 3,000 people, a majority belonging to the Rengma Naga tribe, a minority in Karbi Anglong district, have been displaced. Violent conflict between two insurgent groups and a statehood demand are reasons behind this forced displacement.

A series of incidents in Karbi Anglong district, beginning in June 2013, preceded this forced movement. According to AHRC’s sources, on 9 June 2013, members of Karbi People’s Liberation Tiger (KPLT), a militant organisation, issued a notice to Rengma Nagas to leave the district within a month or face dire consequences. The Rengma Nagas were also asked to surrender cadres of the Naga Rengma Hills Protection Force (NRHPF), an armed group believed to be formed in December 2012 to “protect” the Rengma Naga community.

The shismogenesis of KPLT relates to the history of the Karbi quest for autonomy vis-a-vis neighbouring tribes and in relation to the Union of India. The KPLT, earlier known as the Anti-Talks Factions of Karbi Longri North Cachar Hills Liberation Front (KLNLF-ATF), is an off-shoot of the Karbi Longri North Cachar Hills Liberation Front (KLNLF), which itself broke away from the United People’s Democratic Solidarity (UDPS). UDPS signed ceasefire agreement with the Union government and surrendered in December 2011. The KLNLF is itself now in peace negotiations with the government, having signed a Suspension of Operation (SOS). However, the KPLT – formed when 20 members broke away from KLNLF in 2010 – decided to continue demands for the creation of a Hemprek Kanthim (self-ruled homeland) for the Karbi community in the Kabri Anglong and Dima Hasao districts.

As a result of the KPLT notice, as simmering tensions began to boil over, more than 500 villagers fled their homes within a month’s time. These internally displaced people found shelter in what is now known as Chokihola relief camp.

October and November 2013 saw the KPLT allegedly impose an economic blockade, restrict movement, and make extortion demands on the Rengma Nagas. This severely obstructed the orange trade in the district, one of vital sources of livelihood of the Rengma Nagas in Karbi Anglong district. The Assam government failed, abysmally, to take measures to lift the isolation and economic blockage that affected the freedoms and trade of minorities in the district.

In order to restore peace and normalcy, community based organisations convened a meeting on 17 December 2013 and concluded that in the future anti-social activities would be monitored and respective tribes would hold their members accountable. The meeting also urged the creation for a police outpost in the area with immediate effect. The absence of police presence in the area to this date is but an indication of a negligent state.

Unfortunately, this community-based peace initiative failed; a series of killings, assaults, and destruction of property ensued, allegedly carried out by both the KPLT and NRHPF cadre.

Subsequent attempts for restoring peace by the social organisations, local political groups, and by police authorities proved fruitless. Violent attacks restarted on 27 December 2013. Fear displaced more than 3,000 people. Police inaction and passivity is considered to have contributed to the fear and exodus.

Tension reached a height again on 3 January 2014 when nine dead bodies were recovered from a grave in Chumukedima near Dimapur, Nagaland. The bodies were identified as those belonging to the Karbi community. NRHPF cadres are suspected to have been involved in these 9 murders in retaliation to attacks committed on Rengma Nagas.

The Assam Government announced compensation of INR 6 lakh for each of these 9 deaths. This announcement created yet another rift between the two communities. This is because of the unequal distribution of compensation to the kith and kin of Karbis and Rengma Nagas killed since end December 2013. 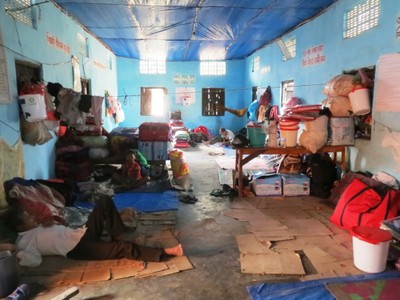 As on 22 March 2014, a total of 542 displaced persons out of the 1002 people lodged in the Silonijan Relief Camp, in Bokajan Sub division, have returned to their homes. However, being a minority community in Karbi Anglong, fear and insecurity prevails among the Rengma Nagas. Rengma Naga leaders have appealed for financial relief and rehabilitation support for the displaced people of their community.

An independent fact finding mission led by social activists submitted a memorandum to the Governor of Assam on 20 January 2014. The team observed that the state government had failed to maintain law and order despite prior intimation regarding impending violence and heightened conflict. The team expressed concern about the merging of judicial and executive powers in the district, where the Deputy Commissioner has been handling the law and order situation as well as conducting trails for cases. Karbi Anglong is an autonomous district as per Sixth Schedule [pursuant to Articles 244(2) and 275(1)] of the India Constitution where judicial and executive powers are not separated. This status has raised suspicions regarding the possibility of equitable justice guaranteed by the Constitution since often executives are not trained in law to deliver judicial duties.

Another memorandum, submitted on 30 January 2014 to the Governor of Assam by Rengma Naga organisations alleges that Rengma Nagas have been systematically sidelined from decision making processes for decades. The Memorandum includes a long outline of severe human rights violations and deprivation in Karbi Anglong district, which, if accurate, concern the AHRC. The memorandum speaks of multiple levels of corruption, economic blockades, disappearances, violations of right to free movement, general police inaction, and extra judicial killings, amongst other problems.

Displacement, and even the threat of it, affects communities enormously and causes insecurity, both physical and economical. It has been well documented how displacement increases human trafficking, as displaced women seek income and financial security.

The AHRC condemns the violent attacks and calls on the Governor of Assam to initiate an investigation and hold the perpetrators – no matter which ethnic group they belong to – accountable for the multiple acts of killings, torture, and restrictions on freedom. The AHRC urges the Assam government to ensure adequate compensation and rehabilitation of those displaced. Both the government of Assam and Union government should ensure justice, relief, rehabilitation and equal compensation for Rengma and Karbi victims and survivors.

Furthermore, the inactive role of law enforcement agencies in such times of ethnic tension, passivity which displaced itself in the face of repeated and desperate attempts by victims to seek protection, raises deep concern. The roles of the police and security personnel need re-assessment so the forces can become accountable and just. Re-establishing security to life and property with police presence should be a priority.

And, if the government of Assam and the Union of India ever wish to amend their policy of governance by neglect, a long term strategy for conflict resolution among different communities in north east India might be wise and in the interest of peace and justice.

Picture Courtesy: Inside of a relief camp at Bokajan by Ms. Aheli Moitra.

« SRI LANKA: The abuse of Presidential Pardon is an abdication of the state responsibility to control crime