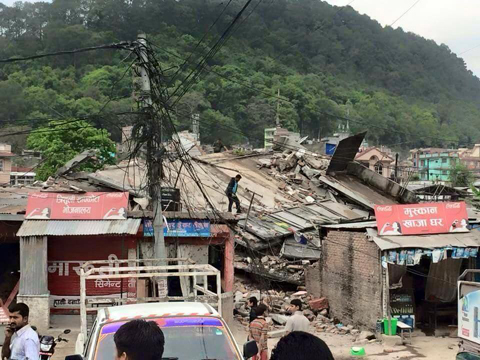 The Asian Human Rights Commission (AHRC) joins the world in grieving the deaths and loss of property in Nepal after the massive earthquake that has hit Nepal today at 11:50 am Nepali time. The 7.9 magnitude earthquake struck 80 km east of Pokhara in Nepal has devastated the country causing human casualties and other damages across the Himalayan nation.

Nepal requires immediate international help. The Indian Air Force, and the Army has already sent search and rescue teams to Nepal. Medical assistance and heavy equipment for rescue operations are also arriving in Nepal from India.

The exact number of lives lost and the damages are still to be ascertained. There is a communication breakdown due to destruction of infrastructure. Estimates suggest that the death toll will be more than 1000 lives. Chances are this number could dramatically increase in the coming hours as information comes in.

During this national crisis, Nepal that was largely unprepared for the crisis like this is struggling to coordinate an emergency response. So far, the AHRC has received information that health workers, the Red Cross, police, army, the civil society and members of the public are involved in rescuing and assisting those in need. Hospitals are filled with injured, and most patients are treated outside in the open due to the fear of aftershocks.

Fearing aftershocks people have taken refuge in open areas. With night fast approaching and heavy rains in the horizon tonight is going to be one of the worst for all in Nepal. Tonight and the following days will be perhaps the most strenuous for authorities in Nepal.

Nepal and Nepalese people need our support during this hour of crisis.

SRI LANKA: Weligama Police refuse to investigate complaint of threats to the lives of victims »