On December 11 to 14, 2018, human rights defenders from South East-Asia and the laureates of Gwangju Prize for Human Rights participated in an international workshop on the ‘Asian Human Rights Charter” organized by the Asian Human Rights Commission (AHRC) and the May 18 Memorial Foundation, (Gwangju, South Korea) in Jakarta, Indonesia. 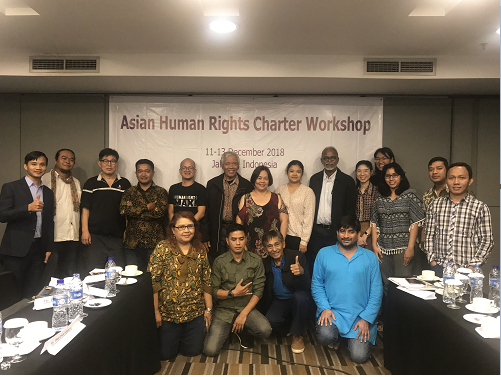 During the workshop, human rights defenders and survivors discussed the ongoing human rights atrocities in relation to right to justice, right to peace, and right to culture. Even as the world marks the 70th anniversary of the adoption of the Universal Declaration of Human Rights, cases of extrajudicial killings, torture, enforced disappearance, and attacks on ethnic and religious minorities continue to haunt nations in the Asia-Pacific region.

In Indonesia, cases of torture and executions stemmed from past atrocities. Some of the victims and relatives raised unsolved issues involving the 1965 massacre. Moreover, the socio-political situation in Papua and Aceh has not shown any improvement over the past few years. Apart from the human rights abuses conflict-prone areas, a significant number of cases of torture, extrajudicial killings, and torture remain unsolved.

In Sri Lanka, a number of people disappeared during the Civil War. The government has not taken any significant action in solving these cases. The political strife that led to the unconstitutional ejection of Prime Minister Ranil Wickremesinghe for seven weeks, worsened the democratization of the country that’s still recovering from the wounds of a Civil War.

In the Philippines, violations have persisted from Martial Law up to the regime of Rodrigo Duterte. Duterte has waged ruthless war on alleged drug peddlers and users. This led to the killings of human rights activists, local officials, church leaders, and innocent civilians. For instance, lawyer Benjamin Ramos was shot dead last month. He was assisting the families of nine slain sugarcane farmers in his province. Earlier this year, Mark Anthony Ventura, a parish priest and anti-mining advocate, was gunned down by assailants. Other members of the media and civil society are at risk of danger for their activities.

In Singapore, the government severely restricted freedom of speech, assembly, and freedom of the press. The death penalty and other ruthless forms of corporal punishment, including caning, is still in practice. Singapore is NOT a party to both the International Convention on Protection of All Persons from Enforced Disappearances (ICPPED) and the Convention against Torture and Other Cruel, Inhuman or Degrading Treatment or Punishment (CAT).

In Myanmar, ethnic and religious minorities, including the Rohingya, Karen, Kachin, and Shan, remain ostracized and are constantly persecuted by the Burmese military. Activists and journalists are often targeted for their campaigns and activities. For instance, Reuter’s journalists, Wa Lone and Kyaw Soe Oo, are now incarcerated for covering the mass murder of the Rohingya people. Aung San Suu Kyi and the National League for Democracy have turned a blind eye to the large-scale human rights abuses in the country. Her government has yet to prioritize judicial reform, reduce the influence of the military in the on-going peace process, and provide citizenship and assistance to refugees.

In Thailand, the military junta still curtails the civil and political rights of the Thai people. A number of lawyers, lecturers, human rights activists, and supporters of opposition parties were constantly targeted by the government. One of those detained, student activist Jatupat Boonpattararaksa, was a recipient of the Special Prize of the Gwangju Prize for Human Rights. Thailand has ratified the CAT but not the ICPPED.

In Laos, the government continued to restrict civil society organizations that are accused of threatening the stability and economic development of the country. Cases of kidnapping, torture, and extrajudicial killings continue to occur. Sombath Somphone, the 2015 Special Prize of the Gwangju Prize for Human Rights awardee, is one of the many activists abducted by the military.

In Cambodia, the regime of Hun Sen witnessed the curtailment of a free and independent press. The Cambodia Daily shut down its operations upon the instructions of the government while most news outlets were bought or manned by Hun Sen’s cronies. In addition, several notable figures of the opposition party were recently purged by his government, including Kem Sokha of the Cambodia National Rescue Party and Kem Ley, who was gunned down at a petrol station in Phnom Penh in 2016. Cambodia is a party to both ICPPED and CAT.

Given the stark and gloomy situation of human rights violations in Asia, the Laureates of the Gwangju Prize for Human Rights condemn these vicious acts affecting the right to justice, the right to peace and the right to culture of citizens and human rights defenders.

Therefore, we, of the Asian Human Rights Commission, May 18 Memorial Foundation and the Laureates of the Gwangju Prize for Human Rights, demand:

* the governments in Asia to eradicate all forms of torture, enforced disappearances, extrajudicial executions, and other forms of violence in relation to the rights to justice, peace, and culture;

* the civil society and international community to assess the capacity and competence of the institutions in Asia and monitor their capacity to uphold the Rule of Law;

• all Asian governments uphold the right to justice and provide reparations to the victims of past and present human rights abuses.

• the Indonesian government to halt inhumane practices and all forms of repression in Papua and Aceh. This includes ensuring freedom of expression and press freedom without any restriction from the military.

• the Myanmar government to cease all military activities in Rakhine state and release Wa Lone, Kyaw Soe Oo, and other political prisoners. The government must express its sincere commitment to human rights and democracy.

• the Thai government to release Jatupat Boonpattararaksa and other political prisoners.
• the Sri Lankan government should investigate cases that occurred during the Civil War and compensate the victims of the tragedy.

• the Singaporean government should uphold free speech, and protect the civil and political rights of its citizens.

• the Indian government should immediately release Gopal Das and all activists who were abducted by the authorities.

• the Philippine government to immediately release all political detainees, investigate cases of killings, disappearances, and torture, and protect the people’s freedoms of assembly, association, and expression. The Duterte government should be held accountable for the massive loss of lives due to his brutal anti-drug campaign.

• the Lao government to immediately surface Sombath Somphone and prosecute those responsible for his disappearance.

« NEPAL: In search of judicial independence

INDIA: Authorities hand over trafficked children to families of traffickers »