The theme for the 2017 World Day Against Child Labor is to protect children from child labour in conflicts and disasters. “The world aims for the elimination of child labour by 2025, under the sustainable development goal. Pakistan has committed to take immediate and effective measures to eradicate forced labour, modern slavery and human trafficking by 2025 thereby ending child labour in all its forms.” 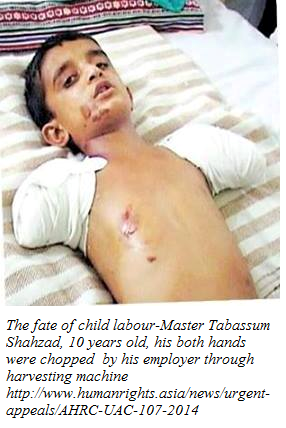 On the ground however, the government has done little more than pay lip service to the resolve. Child labour continues unabated in the country, due to conflicting laws and lack of political will. Pakistan was ranked third on the Global Slavery Index 2016, for the second time in a row, with an estimated 2,134,900 people trapped in slavery. Meanwhile, although the International Labour Organization reports a decline throughout the world in the number of underage workers, Pakistan remains in the third spot with the highest prevalence of child and forced labour.

As the government has failed to conduct a fresh child labour survey since 1996, it is hard to correctly ascertain details of children working in different sectors around the country. According to a 2015-16 report published by the Ministry of Federal Education and Professional Training, some 44 percent of children between the ages of five and 16 are still out of school. Out of these, some 15 million children were alarmingly economically active.

And this is the crux of the matter. Four out of 10 Pakistanis are said be living in acute poverty. Given the fact that each household has at least 7- 9 mouths to feed, it becomes imperative for children as young as five to be employed. Poverty is the most detrimental factor for the material, spiritual, and emotional deprivation faced early on by children of impoverished families.

Children are most often employed in agriculture, manufacturing or service sectors as domestic help, and are forced to work under precarious and hazardous conditions that are detrimental to their physical, psychological and mental well being. According to SPARC’s Annual Report on the State of Pakistan’s Children, 2015, there are 264,000 underage domestic workers experiencing cruel and unsafe working environments. They are often left to the mercy of their employers who routinely subject them to physical and psychological abuse, exploitation, and violence. In 2013, 13 children died as a result of violence at their work place, in addition to 21 cases of physical torture by employers.

The plight of child domestic workers is alarming in all four provinces in the country, and cases of torture are often noticed in the upper segments of society, where children are often coerced into working against their wishes. The torturers are often highly educated and belonging to upper or upper middleclass. Each year many cases of domestic worker’s abuse are reported in the media where an underage child worker is beaten to death or injured.

Pakistan has no comprehensive child law, but the Constitution under articles 3, 11(3), 25(3) and 35 prohibits employment of underaged children, while stipulating that the rights of the child shall be protected by the state. Further, Article 37(e) stipulates that the state shall “make provision for securing just and humane conditions of work, ensuring that children and women are not employed in vocations unsuited to their age or sex”. Pakistan has ratified the UN Convention on the Rights of the Child in 1990, but has not enacted any enabling legislation since then, to make its provisions into domestic law. For this reason, the Convention cannot be directly applied in the courts.

To exacerbate the situation of child labour, the power to legislate on child protection legislation has been devolved to the provinces, which has left Pakistan’s National Child Protection Policy in doldrums. The Committee on the Rights of the Child in its general comment No. 5, 2003, has clearly stated that “decentralization of power, through devolution and delegation of government, does not in any way reduce the direct responsibility of the state party’s government to fulfill its obligations to all children within its jurisdiction, regardless of the state structure”.

The Asian Human Rights Commission urges the government of Pakistan to formulate policies and laws to eliminate child labour and take cohesive and concrete steps to work towards ending poverty. The state must realize that child labor and poverty are inevitably bound together. If children continue to be used as a treatment for the social disease of poverty, the country will not be able to eradicate either poverty or child labor till the end of time. The state must also ensure that while eliminating child labor from the export industry, it must also eliminate it from the informal sector, which, being invisible to public scrutiny, leaves the children more open to abuse and exploitation.

INDONESIA: Indigenous Papuans face persecution while exercising their right to freedom of assembly and expression »