Home / News / INDONESIA: What next after symposium on 1965 massacre, Mr. President?

INDONESIA: What next after symposium on 1965 massacre, Mr. President?

The Asian Human Rights Commission (AHRC) has learned about a symposium on the 1965 massacre, held on 18 and 19 April 2016 in Jakarta. The government, represented by the President`s advisory body (Watimpres), the National Commission on Human Rights (Komnas HAM), the Press Council, and also representatives from other government institutions attended the symposium. 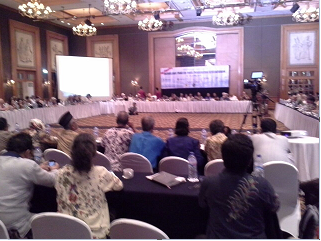 The symposium also invited various participants to speak about the 1965 massacre, namely former military generals, academics, human rights activists, victims, and families of victims from various provinces of Indonesia. According to various sources, approximately 1,000,000 people died and countless people remain missing due to the massacre of 1965.

In the symposium, many victims and former high-ranking officials made statements and testimonies. However, the government and former ranking officials have reiterated their commitment to refuse to issue a public apology to the victims and families of victims of the 1965 massacre. Further, the government has tried to influence the forum by pushing the argument that, as a big nation, Indonesia should forget what happened in the past.

Nonetheless, the AHRC expects that the government’s effort to solve past human rights abuses – in particular the 1965 massacre – will not end with the symposium. The government has to fulfill its commitment to solve past human rights abuses, as written in the nine election promises (Nawacita) and the National Medium Term Development Plan (RPJMN) 2015-2019.

Regardless of the many weaknesses in the symposium, the AHRC welcomes the same and appreciates the government effort; this is because this initiative can become the first step to solving past abuses and ending impunity. The symposium is the first meeting that brought together victims and perpetrators of the 1965 massacre. Therefore, the government effort should not only stop in the symposium, it should be continued and conducted not only in Jakarta, but also in various provinces of Indonesia. Victims and family members of victims should talk freely without any intimidation.

Furthermore, the government must follow up the investigation report concerning the 1965 massacre, submitted by the National Commission on Human Rights. The Law No. 26 of 2000 on Human Rights, cannot simply be ignored; the law mandated that past abuses should be solved through an ad hoc human rights court. Whereas, the Bill on the Truth and Reconciliation Commission, which is already with the Parliament Drafting Committee must consider human rights and avoid blanket amnesty for perpetrators when being finalized.

The government must show its seriousness to solve past human rights abuses through judicial and non-judicial mechanisms; impunity cannot remain unpunished, i.e. unless the government is willing for Indonesia to lapse into a failed state in terms of transitional justice.