The Asian Human Rights Commission (AHRC) congratulates Chief Justice (CJ) Sushila Karki for successfully completing her term before retiring on 7 June 2017 due to her age. Before leaving her office, she exposed pertinent issues marring the judiciary in Nepal. The exposure buttresses the AHRC’s long-time position that there is political interference in the judiciary and police in Nepal. It also exposes that political directions are constantly given to the judiciary, and courts are crowded with political appointees.

The first woman Chief Justice revealed how Nepal’s judiciary, especially the Supreme Court, has long been bogged down in partisan politics and factionalism. She also exposed how judges often compromised their impartiality by seeking post-retirement appointments. Justice Karki said she was unable to implement relevant judicial reforms due to political intervention. Her endeavors to cleanse the Supreme Court failed largely because of political interference and non-cooperation from different stakeholders. She spoke of many obstacles along the way. 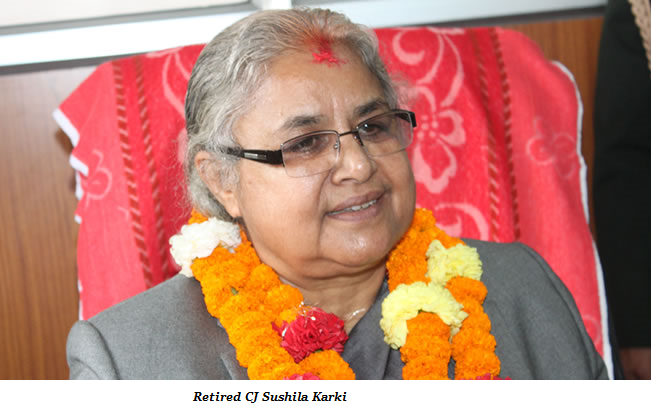 The retired Chief Justice also revealed how Nepal’s former Prime Minister Pushpa Kamal Dahal repeatedly interfered in the business of the Supreme Court. She said she had been summoned on at least three occasions to his residence, and repeatedly asked for a favor on one or another case. In particular, Dahal sought her help in the case against Balkrishna Dhungel, and suggested she defer the hearing and verdict in a case against Lokman Singh Karki, then Chief of the Commission for the Investigation of Abuse of Authority – CIAA. Pushpa Kamal Dahal wanted a postponement in the verdict for 7 months,until he is in power. However, the retired Chief Justice disqualified Lokman Singh Karki.

When politicians found they could not use the Chief Justice at their whims, they suddenly filed an impeachment motion against her, even as she was in the middle of hearing a case. There was no public debate about her misdoings before the impeachment. Politicians accused her of lacking good conduct, and allocating cases to a handful of judges. They accused her of overstepping her jurisdiction and interfering in the workings of the executive, forgetting that this is what the justice system is supposed to do, and the Constitution of 2017 mandates an independent judiciary.

The AHRC would like to remind Nepal’s Executive Branch that interference in the judiciary is a misuse of its power. The country’s Chief Justice is entitled to assign judges depending on their seniority, capacity and expertise, and the exercise of this right must be allowed without threats and interference. The judiciary must be allowed to work independently, mandated as sovereignty of the court. Attempts to gain political control over the judiciary must be stopped, as it only weakens good governance and rule of law in the country.