Home / News / SRI LANKA: Peoples’ expression of frustrations by burning of some houses at Kahawatte

SRI LANKA: Peoples’ expression of frustrations by burning of some houses at Kahawatte 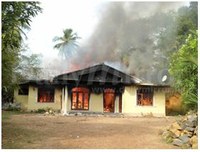 The anxiety felt by the people, particularly the women, due to the recent murders and the failure of the police to investigate led to the people protesting in large numbers, said to be over 2000, in Kahawatta. Following the news that the suspects had been arrested the houses belonging to the brother of one of the suspects was torched by the protesters. The owner of the houses is a Pradeshiva Sabha (council) member and the coordinating secretary to a minister.

The participation of such a large number of persons and the torching of the houses is a clear indication of the frustration that the people are feeling due to the failure of the policing system. A similar incident including the burning of a house occurred a few months ago when a doctor was murdered and the people discovered the identity of the killer. In many other instances also there have been large scale interventions of the people who protested against the police inaction in relation to serious crimes.

While arson needs to be condemned as acts of lawlessness that create a greater sense of insecurity, the participation of the people of a locality in such large numbers needs to be seriously pondered. Attempts must be made by the authorities and other concerned persons to understand the depth of frustration that is expressed by such protests.

Such protests clearly demonstrate that the frustration is not merely with the police but with the government itself which has clearly demonstrated that it lacks the political will to deal with the complicated problems of the failures of law enforcement throughout the island. In the past the excuse of the civil conflict in the north was given as the explanation for such failures. However, there is no real connection between the problem of the civil conflict in the north and the failures of the policing system in the rest of the country. In any case, this excuse no longer holds water after the May 2009 defeat of the LTTE.

The incapacity of the government to deal with the failures of law enforcement speaks to far deeper causes than the mere negligence of the local police or even the police hierarchy. The existing situation is the result of a systemic failure which arises from deep structural reasons rather than mere negligence of particular individuals.

As pointed out by the Asian Human Rights Commission earlier the most difficult problem relating to law enforcement as well as the democratic process in Sri Lanka is the political structure imposed through the 1978 Constitution which has clearly emerged as one that cannot be practically implemented. Empowering a single individual, the executive president, with all the authority of managing the political and administrative structure of the country was, from the very inception an impractical idea. No single individual has the capacity to run the civil administration of a country. The authority that the head of a state has is one of a coordinators role rather than that of a commander into every problem that exists in a country. Thousands of new problems and new situations arise within a country and these situations are multiplied in each locality by way of new situations and new problems.

There needs to be persons at different levels of government with the power and the capacity to comprehend the manifold problems that arise within a country and these authorities should also have the power to take the necessary action on their own. Making these decisions on their own implies that their authority should not be interfered when carrying out their duties. The idea of supervision or the command responsibility of higher authorities does not imply the direct control of each and every individual holding office and depriving such authorities of the right to take the necessary action to deal with the problems that they are confronted with.

What has happened under the 1978 Constitution is that all decisions of all authorities have come under the direct political control of the executive president. As a result of the exercise of this kind of political authority over various institutions the authorities within those institutions have learned that they do not have the independent power to make decisions and solve problems. They have learned to wait for orders. This mentality of the fear to deal with one’s own responsibilities with one’s own initiative is the cause of the paralysis of all the institutions in Sri Lanka including the police. This means that the frustrations that the people have in the failures of the institutions is not going to be resolved until this system which has been imposed through the 1978 Constitution remains the operative system within Sri Lanka.

As a result of each event, for example on each murder the affected people in the localities have to generate an enormous amount of pressure if they want to get any kind of action from the relevant authorities such as the police. The whole system depends on the ability of the people to become directly involved in every problem and to hold public protests in order to create pressure.

Therefore this is not a rational system that relies on multiple sources of authority acting on the basis of the responsibilities that are conferred on them by law and authorities that hold themselves responsible to carry out the duties that are imposed on them within the framework of the law.

The present situation is a direct policy imposing system and not a law enforcement system. Every officer has to be waiting for the command from the top indicating what he or she should do and such authorities cannot depend on the legal mandates that are given to them by the very office they hold.

Therefore, the responsibility for the violence that took place at Kahawatta by burning the houses of the alleged culprits of the crime the responsibility should be laid, not on these helpless people acting out of sheer desperation but on this presidential system that has forced the people to take such action. It is the President that should be held responsible for these acts of violence.

This implies that the initiative for changing the failed system rests with the people themselves. Instead of the desperate action of torching the houses of alleged criminals the peoples’ initiative should be more rationally directed towards dismantling of the executive presidential system which is the cause of their grievances, their frustrations.