We wish to share with you the following article from the Colombo Telegraph, written by Sunalie Ratnayaka.

An accolade to an environmentalist of our times: Piyal Parakrama 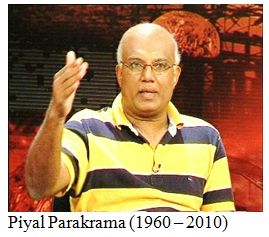 Just about two years ago, on March 3rd 2010, at the age of 49, perceptibly not an age to bid farewell to dear life, another outspoken, sharp-tongued, yet tender-hearted, intrepid, strong-minded Sri Lankan, who did not represent the Colombo elite, which occasionally patted lightly on environmental concerns at times of leisure, as well as a supplementary means of recognition in society, but instead devoted a career that spanned over three decades towards discovering, elucidating and retorting the ultimate raison d’être for deplorable calamities to the environment that he loved and cared for above all.

This human being who bestowed to life and humanity, much more than he seized for himself is an irreplaceable environmentalist of our times, namely Piyal Parakrama, who’s two year absence from planet earth have already seemed to have created a void quite felt by the green earth, as well as by his followers from the subsequent generation continuing on a path alike, in quest of a greener planet, and the assertion of righteousness deserved by the green earth from us human beings. Piyal passed away two years ago, as a result of a heart attack.

At a moment, where Sri Lanka, amidst all other deplorable circumstances that she faces in terms of humanity, and an otherwise anticipated decent existence of human beings belonging to all ethnicities, religious groups, and social backdrops from all walks of life, mother Lanka also faces an appalling menace in terms of her imperative ‘soil’ including the ‘environment’.
And all these calamities, which are quite evident to many, yet hardly brought to dialogue are apparent results of horrendous governance spread amongst all levels, staring from above. The intolerable governance of a bunch of bandits who have attained power, also by smoke and mirrors.

Mother Lanka’s terra firma and it’s soil has become an apparent illegitimate source of revenue to so-called politicians and their henchmen, who apparently has no sensibleness, in aspects of what they are causing upon mother earth. They do not seem to be having the slightest idea that a grade five student would encompass, as per the enormity of their unjustifiable deeds caused on mother earth, and the environment.

Perhaps, they do, yet their gluttony on short-term financial gain maybe surpassing their conscience.

The factual information, which may reveal many a comprehensive reality in terms of scientific occurrence on relevant characteristics pertaining to the subject matter, also reveals two imperative entities that an effortless mind could easily grasp. That is, the short-term and long-term dour catastrophes caused on the environment by these constant brainless acts of political bamboozles.

Recently on Colombo Telegraph, I brought to awareness, the deplorable evil-doing carried out by politically affiliated crooks, with obvious endorsement from stairs above, in connection to the Muthurajawela quagmire in Sri Lanka. However, Muthurajawela is only one such episode, amongst numerous others, both exposed and concealed. Per designated environmentalists, activists, customary nature lovers, and even government representatives that conceal their identity due to obvious reasons continue to claim that the environment of Sri Lanka is in observable jeopardy. The spine-tingling reality remains that all such menace on the environment occurs under the watchful eye and endorsement of those elected high ranking officials of the government.

Therefore, in present day Sri Lanka, one may also argue, as if to what is the actual effectiveness in serving as an environmentalist or activist or even a journalist who may focus on concerns alike. As a journalist, and above all, as a human being, colleagues too, quite often than not, ask me what is the purpose of divulging and creating awareness in terms of such material, when in reality, the controlling body of all entities of concern remain a bunch of mindless, senseless, remorseless lawbreakers that live and breathe for the moment, merrily breaking the law, as long as power may encase them, while their senses seem to cascade with garbage. Knowing facts as is, and for an awful elongated time as well, my conscience still does not allow me to quit. Perhaps, a food for thought.

Be that as it may, Piyal, throughout his life, which he dedicated to the environment and it’s catastrophes, would face any debate held on any podium of any echelon with remarkable self-confidence, as he utterly seemed to be aware of his subject matter, perhaps thoroughly than any other local environmentalist of his era. His pooled rolls as environmentalist, researcher, educator and journalist / media persona made it a plausibly appealing blend, in terms of conveying effectively his message to all pedestals in society. Piyal did not partition standards in society, nor did he allow those representing limited and rather dissimilar standards in society to look down on him, while he passionately spread his meaningful message in terms of his much desired environment, and it’s downfalls. When Piyal unwrapped his lips, and started giving his message of sense, message of weight, message of results of multiple years of research, message of fact mingled with statistics of testimony, the entire overflowing halls verified what pin-drop-silence truly meant. That was the Piyal Parakrama I recall.

In a media interview, which followed shortly subsequent to the end of the civil war between the LTTE and the GoSL forces, this ‘green compassionate man’ strongly stated his vision, as per the necessity to develop Agriculture in the North of the island, which had once been prolific beyond probability, moreover, growing one fifth of the food of the entire realm. He was a being that strongly believed and envisioned Sri Lanka transforming into an economy dominated with ‘agriculture’. In this particular interview, Piyal insisted that Sri Lanka should footstep in promoting ‘agro eco tourism’ where a form of tourism could be promoted, taking the island’s natural ambiance into utmost benefit in the said area under discussion, yet making certain that all takes place without ruination of the environment, and void of eliminating it’s limited resources.

Piyal was a hobbyhorse in deciphering global environmental films into ‘Sinhala’, which paved the path to share such entities of knowledge in the arena amongst a wider audience in Sri Lanka, and such programmes are cherished even today by those vigilant in foliage. He studied ‘Biology’ in Russia’s Lumumba Friendship University from 1983 to 1986, and happened to bear a thorough knowledge in ‘Biodiversity’, especially in aspects of feral and domesticated plants, in mélange with an assortment of their habitats ranging from the woodland to the hill, to the deep, to the coast and the riverbank.

As stated above, in wearing multiple hats as environmentalist, researcher, educator and media persona, the humble soul in him convinced him to keep it modest, as per the designations he held as Executive Director of the ‘Centre for Environmental and Nature Studies’ a non-profit group, Founder President of the ‘Nature Conservation Group’ (NatCog), President of the ‘Green Party of Sri Lanka’, Advisor / Consultant to various Government and Academic Organizations in the country, the late 1990s short-term Project Officer of the ‘Sri Lanka Environmental Television Project’ (SLETP) an educational media project initiated by Television for Education – Asia Pacific (TVEAP) with Sri Lankan partners, a volunteer spanning three decades of the ‘Nature Conservation Group’ and the ‘Young Zoologists Association of Sri Lanka’ and even as an affiliate of the now non-operational ‘Sri Lanka Environment Congress’ (SLEC) that connected fervent green groups of Sri Lanka, back in the day.

Nevertheless, he never looked upon at, or frantically engorged his head by any of the designations he held during his life and times as a renowned Sri Lankan environmentalist, because, in reality, the depth of the knowledge he acquired and shared pertaining to the arena, as well as the services he rendered towards a ‘Greener Sri Lanka’ was way beyond measurement, or truly incapable of assessment with that of the titles he held.

With the enduring evident cracks in Sri Lanka’s law enforcement, as well as with naturally expected causes such as population on the increase, their incessant aspirations and so on and so forth, through the years, Piyal, together with a noteworthy throng dyed-in-the-wool, in the arena have undoubtedly taken the precarious challenges in safeguarding the island’s biodiversity. Just like in any other showground, the spotlight is usually bequeathed upon a group of selected, captivating living beings, would it be leopards, elephants, or a striking breed of multihued toads. Yet, what Piyal and his collaborators that included scientists, journalists, educators and activists of all echelons truly informed the isle, was the fact that, in reality, plentiful other species of flora and fauna were actually in danger of extinction. Without bringing the matter to a standstill following its exposure, Piyal went on an additional step, as per the modes of conserving same.

Just like in any other field, those who dedicate themselves to what they do, especially in unpresumptuous entities that serve the planet in a positive manner for generations to come, Piyal too underwent vicious bites, and ferocious scrapes from pointed teeth and contagious claws of those only interested in monetary gains in life. They included investors, industrialists, and even certain politicians that detested Piyal’s fortitude. As there is always good and evil intermingled in this world, Piyal also had numerous contacts that included centres of edification from schools to universities to private institutes, community groups and even the honest fragment that served in certain government institutions that encouraged and poured invaluable information on Piyal. Information combined with factual data that accurately nourished Piyal’s quest for a Green Sri Lanka.

Piyal Parakrama was a Green Figure of Sri Lanka, who had a dream of launching ‘Environmental Justice’, with a vision of keeping the ‘Ecological Paw Mark’ that would never sponge down even by the slightest rainfall in Sri Lanka. He knew how easier said than done it all happened to be, yet, he never gave up, until life gave up on him. In present day Sri Lanka, as the average general public, along with the current economical, societal, culturally-alienated and unlegislated issues, seem to struggle in maintaining day-to-day life, at a considerably obvious mode, talking, writing or creating awareness about the realities of the ‘Natural World’ and a ‘Green Planet’ may sound a bit of a shaggy dog story.

We all are being on familiar terms with it, and Piyal too certainly may have recognized it. I’m sure, Sri Lanka’s present, vigorous environmentalists that passionately seem to continue on the ‘relay-race’, picking the ‘baton’ from where Piyal Parakrama left it, too are aware of the difficulties in even gaining public attention on the topic, let alone the public’s chipping in, towards commitment for a greener Sri Lanka.

In spite of all odds, the passionate one shall carry the baton forward, until the next point of exchange, which we all, as nature lovers, anticipate to be a triumphant point, where a further exchange of the baton maybe redundant. Until then, the relay shall persist and Piyal Parakrama shall be remembered at all points of baton exchange, and way beyond. May his journey through Samsara be concise.

About the author:
Sunalie Ratnayake is a Sri Lankan born journalist based in Los Angeles, who could be reached at: sunalie.secretandbeyond@yahoo.com

« SRI LANKA: Forwarded Open Letter from La Via Campesina to the authorities in solidarity with Herman Kumara

SRI LANKA: Peoples’ expression of frustrations by burning of some houses at Kahawatte  »