Home / News / PAKISTAN: Sectarian killings — the nexus between Saudi Arabia and the army of Pakistan is now being openly discussed

PAKISTAN: Sectarian killings — the nexus between Saudi Arabia and the army of Pakistan is now being openly discussed 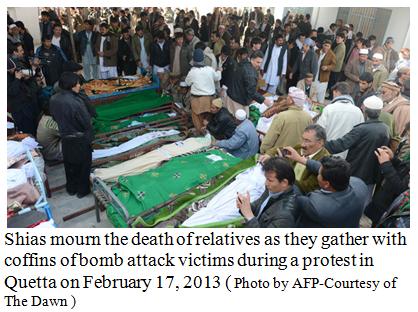 The Asian Human Rights Commission strongly protests the murders of members of the Hazaras Shia community. A series of bombings in Hazaras town, Quetta, the capital of Balochistan province, claimed many lives, all of them members of the Shia Community. This recent blast on February 17 is the second one. The first one took place on January 10, and killed 90 persons. Then in the short space of just one month and seven days, another blast occurred which cost the lives of 107 persons. In both incidents more than 500 persons were injured. The second bombing took place despite the presence of the army and one of its units, the Frontier Corp (FC) which was assisted by more than three intelligence agencies working under the military command.

After the first blast of January 10, the government suspended the assembly of the province and imposed Governor’s Rule in a bid to control the sectarian terrorism. However the efforts seem futile as the root of the issue has not been properly addressed. In similar manner acts of bloody terrorism have been ongoing in different parts of the country for more than a decade. They are carried out by well known and identified militant groups, particularly in Karachi, the capital of Sindh province and in many parts of the Khyber Pakhtoon Kha province.

The militancy and suicide bombings have become a well established business of the country and have successfully overpowered the state which, for decades now, has been spending huge amounts of money on the military and the intelligence agencies. There are 19 intelligence agencies including seven agencies under the Armed Forces and they are not accountable to any state institution. Despite this huge expenditure not a single day goes by without a suicide blast or a terrorist attack. The powerful army governs the state in a real sense in the name of national security and the so-called ideology of Pakistan, never allowing civilians to enter into what they consider to be national security affairs. This is the reason why the military does not want other institutions to tackle the menace of terrorism. Instead the military treat the terrorists as friends-in-arms, hoping for their assistance in the event of trouble after the withdrawal of the allied forces from Afghanistan. It is evident that retired army officers are providing training to the terrorists.

Balochistan province and especially its capital have been virtually under the control of military and its intelligence agencies for the past one and half decades, in every nook and cranny there are security kiosks and check posts of the military and the FC. No person has the liberty to go about his business without producing his or her identity and suffering a search of all their belongings. Even a person who purchases food stuffs from the vendors has to get clarification from the FC personnel who are all around the streets of the capital. The searches extend even to the shoes of the residents. Therefore it is not possible that anything can enter without the permission of the FC, police and other local law enforcement agencies but the bombings continue. There is also very strong network of intelligence agencies in Balochistan, if any guest arrives at any relative’s house, even, in the remotest part of the province the intelligence agencies and police enquire about the guest and sometimes detain him for several hours for enquiry.

Therefore, it can only be assumed that the terrorists with huge amounts of explosive material are moving about with the tacit approval of the FC and other law enforcement agencies. Since the last two years it is observed that when the Hazaras pilgrims were going in buses to Iran their buses were attacked close the picket points of the FC. This was also witnessed when the Shia pilgrims from Gilgit Baltistan were travelling in buses and were attacked and killed by men in military uniforms. All these incidents were reported and to-date the military has remained silent. Interestingly neither have they contradicted such reports.

The failure of the military and intelligence agencies to stop the killings of members of the Shia community in Balochistan province is now being discussed in the media and in government circles. Indeed, media analysts are blaming Saudi Arabia for the killings. This is significant because only a short time ago to make such an allegation was prohibited. It is said that the killings of the Shiites is the result of the conflict between Iran and Saudi Arabia. It is openly believed that because Pakistan is entering into different trade pacts with Iran and China the United States of America and the Kingdom of Saudi Arabia want to block such ventures. Saudi Arabia is providing huge grants to the Pakistan army and many analysts report that the army and its units have a vested interest in turning a blind eye to the sectarian attacks against the Shiites.

During the latest carnage against the Shiites on February 17, the terrorists were carrying 1000 kilograms of explosive material in a water tank which passed through many check posts of the FC. The driver informed the FC officials that he was carrying water to Hazaras town and so was not searched. However, considering that this was a most sensitive area due to the bombing on January 10 where 107 persons were killed there is no excuse for the FC not to have checked the contents of the tank.

A banned organisation, Lashkare Jhangvi has claimed responsibility for the attack as it has done for the previous attacks on Shiites and particularly on Hazaras. This organisation all its bases in Punjab province and is running hundreds of mosques from where they preach their messages of hate against Shias calling them infidels and liable to be killed. Its leaders are free and openly collecting funds from the streets. Instead of taking action against them the law minister of the Punjab government is notorious for providing protection to the militants of banned organisations and these groups support him in the elections.

The courts also have a soft attitude towards such organisations and release them for want of evidence. Even the Chief Justice of Pakistan has released its leader, Malik Ishaq for not having any evidence. This is despite the fact that Malik himself confessed publicly before his release in 2010 that he has killed more than 100 Shia persons and was involved in the attack of Sri Lankan cricket team. After every incident of terrorism Malik goes to Saudi Arabia where he gets VIP treatment and given huge rewards for his ‘the service to Islam’.

The Asian Human Rights Commission once again urges the government to take strong action against the sectarian violence in the country and rein in the militant groups that virtually control the mosques without any interference. The use of loud speakers from the mosques through which their messages of hate are spread are banned according to the law except for Friday prayers. However, no action is ever taken against this violation of the law. The government must clamp down on any mosque that makes use of loud speakers to incite sectarian violence.

The government must prosecute the corps commander of the army stationed in Quetta, the FC commander, the Inspector General of Police and the chief of the ISI in Balochistan on the charge of the killings of hundreds of Shiites. The nexus between the Kingdom of Saudi Arabia and the army of Pakistan must also be investigated so as to ensure exactly who the army command is loyal to.

The Asian Human Rights Commission also strongly urges that the FC, the army and the intelligence agencies are withdrawn from Balochistan province and immediately conduct free and fair elections so that the problem can be handled politically rather than militarily.

« BURMA: Fears that police and judge acting to cover up rape, assault and trafficking of teenager

INDONESIA: Seven Papuans are arrested and tortured on false allegations of having a relationship with pro-independence activists »