Home / News / INDONESIA: Seven Papuans are arrested and tortured on false allegations of having a relationship with pro-independence activists

INDONESIA: Seven Papuans are arrested and tortured on false allegations of having a relationship with pro-independence activists

The Asian Human Rights Commission (AHRC) has received information regarding the arbitrary arrest and torture of seven Papuans which took place on 15 February 2013. The victims were driving home in two cars when the police stopped them as they were looking for two pro-independence activists. The victims were later brought to the police station where they were further questioned on the whereabouts of the activists. They were severely beaten, kicked and electrocuted before being five of them were released without charge the next day. However, as at the time of writing two of the victims remain in police custody.

According to interviews and fact gathering conducted by local activists, including Yasons Sambom, on 15 February 2013 at 9am, a silver painted car stopped Daniel Gobay, Arsel Kobak and Eneko Pahabol who were driving on their way home from Depapre to Doprena. Five police officers, one of whom was identified as Iptu Beduh Rahman, got out of the silver-painted car and pointed their weapons at Daniel, Arsel and Eneko. The police then ordered the three men to crawl on their stomachs to Depapre Sub-District Police Station which is approximately 30 metres away from the place where they were stopped. (Picture 1: Eneko Pahabol, source: local activist).

An hour after they arrived at Depapre Sub-District Police Station, Daniel, Arsel and Eneko were taken to Jayapura District Police Station. The police started questioning three of them on the whereabouts of Terianus Satto and Sebby Sambom, two pro-independence activists whom Daniel, Arsel and Eneko do not have any relationship with. Eneko Pahabol told the local activists that he was repeatedly kicked in his face by officers who were wearing police boots. The officers kicked him both in his left and right knees which caused them to bleed. Eneko and his friends were also beaten with a rattan stick as well as being electrocuted on their legs. The police officers pressed the barrels of their guns to their heads, forced them into their mouths and ears. Arsel Kobak told the AHRC that he was asked to take his clothes off and kicked on his head, face and back by the police officers. As a result, his mouth and nose were bleeding, his forehead was wounded and he is now experiencing hearing difficulties. 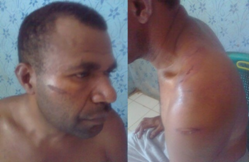 On the same day at around 10am, the police separately stopped another car which was carrying Yosafat Satto, Salim Yaru, Matan Klembiap and Obed Bahabol. As with Daniel, Arsel and Eneko, they were also stopped by police officers in a silver-painted car in Depapre on their way home. The police officers were wearing civilian clothes and carrying Pindad SS-1 assault rifles which they pointed at Yosafat and his friends. They firstly took Yosafat, Salim, Matan and Obed to Depapre Police Station but later moved them to Jayapura District Police Station. As they arrived at Jayapura District Police Station, Yosafat and his friends were ordered to take their clothes off before the police officers started beating and electrocuting them. The officers also pressed their guns to the heads of Yosafat, Salim, Matan and Obed and asked whether they know anything about the whereabouts of Terianus Satto and Sebby Sambom. None of them know Terianus and Sebby Sambom so Yosafat as well as his three other friends told the police that they do not know anything, an answer that made the officers tortured them even more severely. The officers kicked, beat them with rattan sticks on their backs until they were bleeding, as well as electrocuted them in the face. (Picture 2: Yosafat Satto, source: local activist) 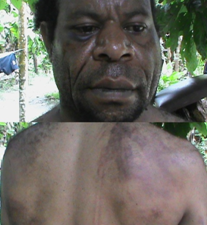 Obed Bahabol told the local activists that they later were interrogated separately and he was the first person to be questioned by a police officer. The police officer jammed the barrel of his gun to his mouth so forcefully that his tooth was broken. The officer also repeatedly beat Obed on his forehead that it was bleeding because Obed told the police that he had no idea on the whereabouts of Sebby Sambom. (Picture 3: Obed Bahabol, source: local activist).

On the next day on 16 February 2013, five of the seven arrested persons were released without charge. As the time of writing, Daniel Gobay and Matan Klembiap are still detained in the police custody, allegedly for possessing bladed articles. However, the charge and their reason of detention are still subject to clarification. Neither Daniel nor Matan has any legal representation as of the time of writing.

In his report in 2008, the UN Special Rapporteur on Torture and other Cruel, Inhuman or Degrading Treatment or Punishment highlighted that torture is practised widely across Indonesia, including Papua. In 2010, for instance, the AHRC released a video online which depicts military officers brutally torturing an indigenous Papua. Last year, the AHRC also issued an urgent appeal on the torture of 42 prisoners and detainees by prison authorities at Abepura Correctional Facility.

Despite the abuse took place, little have been done by the Indonesian authorities to make sure the perpetrators are punished proportionately to provide justice for the victims. Military officers who were responsible torturing a Papuan on the video in 2010 were sentenced only to 9-12 months imprisonment while the allegation on torture at Abepura Correctional Facility has never been investigated by the police.

Indonesia has been a state party to the UN Convention against Torture and other Cruel, Inhuman or Degrading Treatment or Punishment since 1998. Torture is not yet a crime under the country’s legal system that state officials who conducted such abuse are usually unpunished or charged with provisions on assault under the Penal Code whose punishment do not reflect the gravity of the act. For example, the Muaro Sijunjung District Court recently sentenced four police officers responsible for the torture and death of two minors only to 18 months to three years imprisonment.

Please write to the listed authorities below asking them to ensure that criminal investigation on this case is taking place. Please emphasise that the investigation should be conducted impartially and effectively and those responsible for it are punished proportionately. Urge the Indonesian authorities to provide medical assistance as well for the victims so they can have their injured treated.

In addition to those authorities, the AHRC is writing a separate letter to the UN Special Rapporteur on Torture and other Cruel, Inhuman or Degrading Treatment or Punishment.

INDONESIA: Seven Papuans are arrested and tortured on false allegations of having a relationship with pro-independence activists

I am writing to voice my deep concern regarding the arbitrary arrest and torture of seven Papuans by officers from Depapre Sub-District as well as Jayapura District Police Station on 15 February 2013. I was told that the police arrested and tortured them as they alleged the seven victims are linked to two pro-independence activists, Terianus Satto and Sebby Sambom, an allegation which turned out to be false.

At 9am on 15 February 2013, Daniel Gobay, Arsel Kobak and Eneko Pahabol were driving home from Depapre to Dormena when a silver-painted car carrying five police officers stopped them. The officers pointed weapons at Daniel and his friends, asking them to crawl on their stomachs to Depapre Sub-District police station which is approximately 30 metres away from where they were arrested. An hour after the victims reached the police station the police took them to Jayapura District Police Station to be questioned on the whereabouts of the mentioned two pro-independence activists whom Daniel and his friends have no relationship whatsoever.

I received the information that police officers who were wearing boots kicked Eneko repeatedly in his face as well as left and right knees until they were bleeding. The officers beat the victims using a rattan stick, electrocuted them in their legs and pressed the barrels of their guns to their heads, forced them into their mouths and ears. Arsel Kobak was asked by the officers to take his clothes off, and got kicked in his back, head and face that his mouth and nose were bleeding. His forehead was also pounded and he is currently experience hearing difficulties due to the repetitive beatings in his head.

On the same day at 10am, the police officers separately stopped Yosafat Satto, Salim Yaru, Matan Klembiap and Obed Bahabol not far from Daniel and his friends were previously arrested. Yosafat and his friends were stopped by five police officers driving a silver-painted car, wearing civilian clothes and carrying Pindad SS-1 assault rifles. The officers pointed their rifles at the victims and took them to Jayapura District Police Station after previously holding them at Depapre Sub-District Police Station.

In Jayapura District Police Station, the police ordered Yosafat and his friends to take their clothes off, beat and electrocuted them. As in Daniel and friends’ case, the police asked Yosafat, Salim, Matan and Obed on the whereabouts of Terianus Satto and Sebby Sambom. As none of them have any relationship with Terianus and Sebby, the victims told the police that they do not know anything, which led to the police tortured them even more severely. They were kicked, beat with rattan sticks on their back and electrocuted in the face before being interrogated separately by a police officer. Obed Bahabol was the first person who was interrogated separately. The police officer who questioned Obed jammed his gun’s barrel into Obed’s mouth so forcefully that the victim’s tooth was broken. The officer also beat Obed on his forehead until it was bleeding.

After torturing the victims and finding out that they do not have any knowledge on the whereabouts of Terianus Satto and Sebby Sambom, the police released five of the victims on the next day, 16 February 2013. Daniel and Matan are still held in police custody as the time of I received the information yet it is for the allegation that they had bladed materials under their possession. Neither Daniel nor Matan have received any legal assistance as at the time of writing.

I am disgusted to learn that torture remains practised widely in Indonesia, despite the fact that it is a state party to the UN Convention against Torture and Other Cruel, Inhuman or Degrading Treatment or Punishment. I am particularly concerned that this abuse is repeatedly practised by Indonesian authorities towards the Papuans. This is not the first time I have received a report on torture in Papua – I am aware, for instance, that the Indonesian military tortured several Papuans in 2010 and got punished lightly for it and that the prison authorities at Abepura Correctional Facility tortured 42 detainees and prisoners last year without being tried and punished.

I am urging you to ensure the impunity that took place in the cases I mentioned above is not repeated in this case. The allegation on torture experienced by Daniel, Arsel, Eneko, Yosafat, Salim, Matan and Obed has to be investigated impartially and effectively by relevant authorities even when there is no complaint submitted by the victims. Those who are responsible for it should be held criminally responsible and punished proportionately. I am also calling you to ensure that the victims in this case are granted adequate medical treatment so they can have their injuries treated. As for Daniel and Matan who are still under police custody for the allegation on possessing bladed materials, I am urging you to ensure that the legal process is conducted in accordance with the law and that their basic rights are respected as well as fulfilled.

I look forward for your positive and adequate response in this case.

SRI LANKA: The mother’s appeal for saving the life of Sudeshkar facing the death sentence in Qatar »