The Asian Human Rights Commission (AHRC) strongly condemns the attacks on two Churches and mourns the murder in cold blood of innocent Christians.

The incidents took place on March 15, at Yuhana Abad, Lahore Punjab province outside two churches, St. John’s Catholic Church and the Protestant Christ Church, separated by just 400 meters, the attack cost 17 persons including five Muslims their lives. Later on angry mob in retaliation killed and burned alive two persons who were suspected as terrorists by the mob. Later on it was transpired by the family members that one of them had nothing to do with terrorism and he was an ordinary glass cutter. This incident and continuous protests lead to death of 21 persons and 84 injured during the three days. 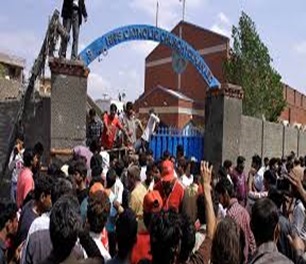 The situation with religious minority groups is deteriorating day by day in Pakistan where government of Pakistan and all the time powerful Army claim that they have started military operations against the terrorists however the attacks on religious places of religious minority groups continues unabated besides the target killings of individuals from minority groups. During the past two months the two mosques from Shia Muslim Sect were attacked and more than 80 persons were killed and 130 were injured. On January 30 the Shia mosque at Shikarpur, Sindh was attacked wherein 58 persons were killed and 60 injured. On February 14, in Peshawar, KPK province a Shia mosque was attacked where 26 were killed 70 injured. In all these incidents the sectarian groups linked with Taliban claimed the responsibility. But no one has been arrested and perpetrators are enjoying the impunity and police and army failed to stop such incidents.

The ongoing operation Zarb-e-Azb, the name given by the Pakistan Army to its operation, has so far yielded no results. The terrorist are striking wherever they may please. Christians in Pakistan have borne the brunt of increasing radicalization and extremism, the peace loving community has been targeted times and again for no crime of theirs. Christian, Ahmadies, Hindus, Shia community continuously being targeted for professing a faith other than the sunni faith. The places of worships of these communities are susceptible to be targeted by the Taliban yet; the state knowing the dangers posed to these places has offered no protection. The omnipresent terrorist faction has weakened the writ of the state resultantly there is no semblance of rule of law in Pakistan today. The impunity that these so called jihadist have from the government has virtually made it impossible for the minorities to enjoy rights on the same footing as that of the Muslim majority.

The state appears tactless to the point of being complicit to such attacks. The brazen attacks on the places of religious minority are increasing in frequency and magnitude and there is no reaction from the state. The government appears clueless and seems to have no action plan to deal with the terrorist. To date the government has failed to arrive at a political consensus on the list of banned outfits. This criminal complicity of the government has encourage the extremist factions to declare an all out war against the marginalized religious non Muslim, non -sunni minorities of Pakistani.

Youhanabad neighborhood where the attack took place is home to more than 100,000 Christians. The attack came at the wake of the warning by the Taliban to target more civilians in retaliation to the ongoing military operation. Interestingly most of the attacks on the Christian community have occurred in the Punjab province, a stronghold of the ruling PML(N) party. The chief minister of the province being the young brother of the Prime minister yet we see no political will from the brother duo to end the menace of terrorism and militancy. The government has failed miserably at protecting the Christian minorities who have been left at the mercy of religious fanatics. Sadly this is not the first or last time that this community has been made a target; in 2014 a Christian couple was burnt alive by an angry mob alleging blasphemy. As if in the same vein the angry mob that gathered following the suicide attack two of the suspects apprehended by the police, were dragged from the police van and beaten and burnt to death. The Lahore incident was a far cry from the peaceful protest that marks the aftermath of such attacks. Ominously this might prove to be the harbinger of more violent protest, mob justice and even more lynching by angry mobs, meting out their anger against the lack of justice, on innocent bystander who just happens to be at the wrong place at wrong time.

The deteriorating state of rule of law and criminal justice system has brought to light the failure of the state to protect its citizens especially the marginalized. The rare show of anger by the beleaguered community is a sad proof of growing anger and impatience at the absence of concrete actions by the state. The National Action Plan (NAP) has been proved worthless with the passage of time; the state machinery has failed at apprehending the culprits. The criminal justice system is unable to deliver justice for those seeking reprisal. The sorry state of affair has created a social vacuum and a sense of deprivation amongst the religious minority. People have lost faith in the criminal justice system and the state; consequently we are witnessing more and more such horrendous incidences where mobs take law into their own hands. The Lahore incident is a reminder of absence of rule of law that would yield anarchy and law of the jungle. The sectarian and religious divide has further fractured the deep fault lines within the state created in the name of Islam.

The AHRC urges the government of Pakistan to strengthen the institutions of judiciary rather than outsourcing this important function of the state to the military which would obviously result in miscarriage of justice. The government must play its role to encourage interfaith dialogue and religious harmony. The hate preachers should be dealt with sternly and not allowed within public domain. Religious curriculum should include inter faith referencing and understanding of other minority faiths. The AHRC also urges the judiciary to expedite proceedings of all terrorism cases so that the culprits are brought to book. The religious intolerance that is seeping into the masses should not be allowed it is the responsibility of the state to facilitate religious harmony and be extra vigilant in protecting the rights of its minority.

« SRI LANKA: Efficient police investigation needed into the murder of two business people with protection for victims and witnesses in the case