The Asian Human Rights Commission (AHRC) condemns the attack on well-known activist Amitha Priyanthi on July 6, when she was walking towards her home in Moragawala, Aluthgama. Two motorcyclists dressed in black, with helmets covering their faces, stopped and assaulted her on her head and other parts of the body. They took her handbag, which had the files of some sensitive cases, and her mobile phone.

Amitha Priyanthi immediately visited the nearby police station with her husband, where they recorded a complaint, and helped the police conduct a location inspection. The attackers’ motorcycle number was VZ7858. 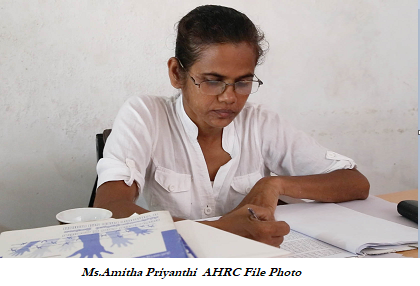 Amitha Priyanthi is a renowned human rights activist in Sri Lanka, fighting against extrajudicial killings, torture and other police abuses for over 18 years. She is seen often at court houses, at the office of the National Human Rights Commission of Sri Lanka, or at police stations, trying to pursue cases and to extend solidarity to victims and their family members who are pursuing their cases against the police or other security agencies.

This involvement in the fight against human rights abuses began when Amitha Priyanthi’s brother, a soldier, was arrested by the Payagala Police. Held in police custody for about eight days, he was severely tortured by the police. He was then brought before a medical officer who failed to a perform proper examination on the patient. As a result, he was remanded and died in remand-custody on the very first day he was admitted to prison.

The attempt to get justice for her brother transformed Amitha into a human rights activist after she began to witness the manner in which the police and the court system in general provides impunity for the police, while carelessly disregarding victims’ rights. With the lessons learned from her brother’s case, she began to offer help to others facing similar problems. She finally became a full time member of Janasansadaya, a people’s forum dedicated to providing assistance to victims of human rights abuse, particularly torture victims. Within a short time, she had gained deep insights into all the defects of the criminal justice system in Sri Lanka and became engaged in activities related to criminal justice reforms.

While it is too early to predict the motives of Amitha’s attackers, there is reason to believe that the assault may be due to the high court trial in the case of her brother’s death. After his death in 2000, there was no trial because the suspected police officer fled the country. It was found recently however, that the culprit has returned to Sri Lanka. When this matter was brought to the notice of the courts, the culprit’s wife was summoned to court to give evidence on her husband’s whereabouts. With this, a tense situation has surfaced, with the possibility that the suspect may be arrested and his trial expedited.

Amitha’s family wants this case to be investigated by the Criminal Investigation Unit (CID), rather than left in the hands of the local police. The AHRC supports this call, and urges the Sri Lankan authorities to ensure an immediate and effective investigation into the attack. The National Human Rights Commission of Sri Lanka should also conduct a special investigation into this matter promptly.

This assault demonstrates that even well-known and prominent human rights activists are no longer safe in Sri Lanka, and that causing harm to such individuals has become routine throughout the country. Not long ago, a lawyer interested in human rights issues was severely assaulted, but no inquiry was conducted by the police.

The widespread impunity enjoyed by Sri Lanka’s police and security forces has led to a breakdown of the rule of law. Many persons have observed the situation of a complete lawlessness and the possibility of serious repercussions of this on everyone.