Torture remains a serious problem in Indonesia, even though it has been 20 years since it ratified the International Convention against Torture and Other Cruel, Inhuman or Degrading Treatment or Punishment (UNCAT). There are also various national regulations prohibiting torture: Government Regulation No. 92 2015 regarding Compensation for Victims of Wrongful Arrest; Law No. 16 2011 on Legal Aid; Military Chief Regulation (Peraturan Panglima TNI) No. 73/IX/2010 regarding Prohibition of Torture for military personnel; the National Chief Police Regulation (PERKAP) No. 8 2009 on the implementation of human rights principles for the Police, and; the National Chief Police Regulation No. 14 2012 on investigative procedures. 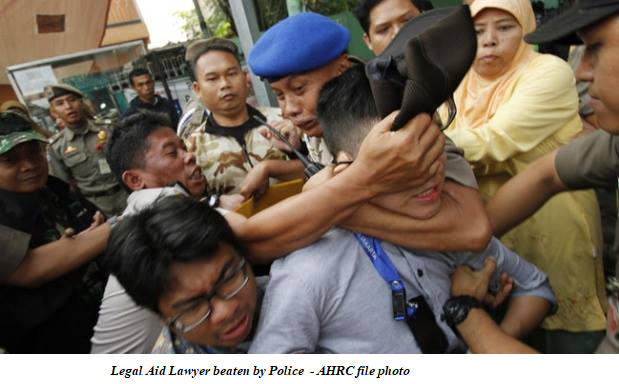 Despite these regulations, the Indonesian police continue to be the most frequent perpetrators of torture. In 2017, the AHRC documented numerous cases of torture and ill-treatment conducted by the police. Mostly, torture occurs during investigation, particularly of those detained in police custody. Police investigators still consider that forced confessions will make the investigation process easier, despite this not being in line with the Indonesian Criminal Procedure Code (KUHAP).

Given that the police are the agency that deals with the community the most, it is not surprising that the incidents of police abuse of power are high, compared to the military, prosecutors or prison guards. Aside from law enforcement, the police also oversee public order and security, issuing of driving licenses, dealing with terrorism, conducting vehicle and motorcycle safety operations. At all levels however, there is no proper oversight mechanism for the police.

Despite Indonesia’s ratification of the UNCAT, and its promulgation of various regulations, the AHRC notes that the lack of accountability and implementation of law has made the eradication of torture difficult. So far, the government has failed to increase the standard of justice for victims of torture; on the contrary, victims still face serious obstacles in seeking justice and remedies. The Indonesian Penal Code (KUHP) merely recognizes torture as maltreatment under article 351. Meanwhile, the slow progress of the drafting of the New Penal Code Bill also contributes to torture victims facing uncertain law enforcement and absence of effective remedies.

One of the torture cases documented by the AHRC gained significant public and media attention in Indonesia, due to its occurrence in the Jakarta Metropolitan Police Office (Polda Metro Jaya), in Indonesia’s capital city. This case is about the torture of three men, Mr. Aris Winata Saputra, Mr. Bihin Charles and Mr. Herianto, who were suspected of motorcycle theft. They were illegally detained and tortured in police custody. Aris’ genitals was smeared with an unguent so painful it forced him to confess. The three suspects were brutally tortured, intimidated and forced to confess that they were involved in the motorcycle theft. Finally the pre-trial Judge of South Jakarta District Court annulled their suspect status. The Judges granted that the allegation of suspect to the plaintiffs is invalid, unlawful and un-enforceable. Furthermore, the search and seizures conducted upon the plaintiffs’ houses is unlawful.

In the last one year, the AHRC also documented and reported torture cases occurring in Papua: #1 Yunus Manauri, a senior high school student of grade X, Teluk Wondama Public school 01 (SMUN 01), West Papua Province #2 Mr. Saldi Hermanto, a journalist in Timika Papua, brutally attacked by Police Officers after a posting on his Facebook. He criticized the Police for failure to secure an entertainment show and guarantee security for visitors in Timika #3 Albert Nawipa (15 years old), a junior high school student. He was abducted, tortured by three Police Officers in Potikelek Market in Wamena and subsequently hospitalized. The police accused him of attacking a dancing show in Potikelek.

In addition, the AHRC recently documented the torture and subsequent death of Mr. La Gode, a resident of Taliabu Island, North Moluccas Province. After being arrested by the police and detained in the Military Post of Task Force (Satgas) 732/Buana, Gode died. He sustained serious injuries to his entire body, particularly on the back and lateral portions of his physique. After this written submission was given over, the Investigation remains on-going, conducted by the Ternate Military police (Denpom).

Considering the above situation, the AHRC requests the government of Indonesia to:

a. Immediately finish and enact the Amendment to the Indonesian Penal Code, and clearly include a provision of punishment of torture in line with international standards;

b. Guarantee prosecution and punishment of torture cases;

c. Ensure adequate compensation for victims of torture. Strengthen the oversight mechanism upon law enforcement agencies ensuring that abuse of power and misuse of authority will not recur so easily;

d. Seriously reform the police and the military institutions as well as prison guards unit to be more accountable and transparent;

e. Ensure an increasing standard of justice for victims and family of victims of torture cases without undue delay.