Globally, June 26 is celebrated as a day of solidarity for victims of torture. All over the world, various kinds of events are held in order to highlight the issue of torture and various ways to overcome this perennial problem. Many of the Asian Human Rights Commission (AHRC)’s partners will also hold meetings in a number of countries in order to discuss the implications of widespread torture, particularly in developing countries. Over the years, the AHRC has pointed out that torture remains endemic, quite routine, and there is hardly any willingness on the part of many countries to put a stop to it. 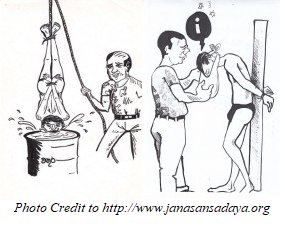 In Sri Lanka, many forms of torture have manifested in recent months. One of the most shocking forms of torture was revealed to be torture practiced on innocent persons in mental hospitals, as seen in three cases that came to the attention of the AHRC. This is a completely new direction of torture in Sri Lanka, and needs to be addressed immediately.

In one case, the former employee of a certain Minister made public statements regarding how the Minister was trying to bring pressure on him in order to have a sexual relationship with his girlfriend. After making such statements several times, this person sought protection in fear of being subjected to serious repercussions by the Minister. Finally, this person was taken to a mental hospital and kept for about one month without any authorization from any Magistrate.

In the other two cases also, the persons have been taken against their will to a mental hospital, but in these instances, it has been after obtaining orders from the Magistrate.

The first question that arises in these incidents is what kind of inquiry a Magistrate should conduct before committing a person to a mental hospital for treatment of any mental illness. It is the duty of the Magistrate to call for all medical reports that may be available about this individual’s past, to see whether the allegations made against him can be justified by any previous medical records. However, in all the three instances reported to us, no such detailed inquiry has been conducted by the Magistrate. Instead, the Magistrate has made his decision merely at the request of the police, who allege that this person suffers from some kind of mental illness, without producing any relevant medical records.

The Magistrate also made no attempt to interview the suspects in court, record their statements or provide them an opportunity to speak about their mental conditions. In all three cases, the suspects are educated adults, all quite capable of explaining their mental condition. It is the duty of the Magistrate to question the suspect about any past or present mental illness, and ask about any symptoms. To send a person to a mental hospital without any such inquiry, is a violation of his right to liberty.

In the last case, the person is also alleged to have been given electric currents in the mental hospital. Before any treatment is given, particularly the use of electric currents, there has to be a thorough medical study into the person’s physical and mental condition. This would usually take a considerable time by a competent person in the field of psychological and mental illness. In this case, there is no evidence of such inquiry conducted before the use of electric current treatment was given. It is a duty of the persons in charge of the hospital to conduct a thorough inquiry into the allegations that have been made, and to take the necessary steps to ensure that no violations of the protections due to a patient have been taken place.

Recent days have also seen cases of extrajudicial killings in Sri Lanka. One person was shot at while being taken into various inquiries under police custody, with the police alleging that the person tried to attack the police and was therefore shot dead. This used to be a popular method of disposing of alleged criminals, but due to public criticisms, in recent years, the number of cases have been reduced. However, the method is surfacing once again, requiring immediate inquiry on the part of law enforcement authorities in Sri Lanka.