INDONESIA: Appointing the Parliament and the Military to Resolve Human Rights Violations Proves that the Chief Security Minister Failed to Understand Justice 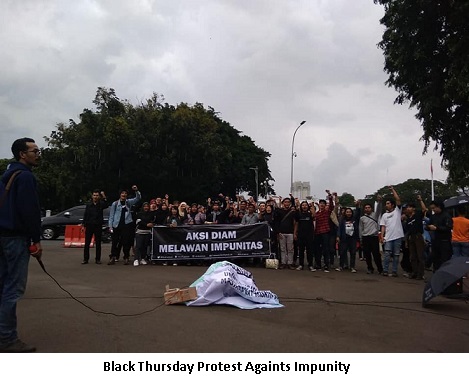 The Asian Human Rights Commission (AHRC) supports survivors and the families of victims of serious human rights violations and strongly condemns the two erroneous statements made during a meeting between the Chief Security Minister, Mr. Mahfud MD and the Indonesian National Army (TNI) Commander General Andika Perkasa on November 25, 2021.

The statement that we think is erroneously was made by Mahfud MD regarding the duty of the House of Representatives (DPR) and the TNI Commander in solving serious human rights violations in Indonesia.

“If the DPR considers that Komnas HAM’s (the National Commission on Human Rights) recommendation must be followed up, then the DPR will deliver it to the President. The important thing is that it has to be discussed first in the DPR, can it be proven or not”

Mahfud MD’s statement in front of the media crew implies a fatal error regarding the duty of the DPR in resolving serious human rights violations.

A similar statement was issued by the Attorney General ST Burhanuddin when he stated that the Semanggi Tragedy 1 and 2 were not serious human rights violations, according to the 2001 DPR Special Committee during a Working Meeting with Commission 3 of the DPR on January 16, 2020. This misunderstanding has been sued by the Coalition for Justice Semanggi 1 and 2 including the families of the victims.

The recommendation from the 2001 DPR Special Committee regarding the Semanggi Tragedy 1 and 2 which was referred by the Attorney General’s Office and used as an example of the legitimacy of the DPR’s duty in resolving serious human rights violations was clearly an erroneous act. The Constitutional Court Decision Number 18/PUU-V/2007 has settled this debate by stating:

“…The Court’s opinion that determining whether or not to establish an ad hoc Human Rights Court for a particular case according to the locus and tempus delicti (place and time) does require the involvement of a political institution that reflects the representation of the people, namely the DPR. However, the DPR in recommending the establishment of an ad hoc Human Rights Court must take into account the results of investigations and prosecutions from institutions that are authorized to do so. Therefore, the DPR will not automatically make assumptions without obtaining the results of an investigation and prosecution from the competent institutions, in this case Komnas HAM as investigators and the Attorney General’s Office as prosecutors in accordance with the provisions of Law Number 26 of 2000. It must be understood that the word “allegations” in the Elucidation of Article 43 Paragraph (2) of the Law on Human Rights Courts may create legal uncertainty (rechtsonzekerheid) as a result of which the word “allegations” can be interpreted differently from the mechanism described above.”

First, before being able to recommend the completion of probes into serious human rights violations to the President, the DPR needs two things, which are an investigation by the National Commission on Human Rights and prosecution by the Attorney General. However, the Attorney General has never prosecuted the 13 cases, and therefore the DPR is not able to deliver those cases to the President. In addition, if only relying on the recommendations of the DPR, at least there has been a recommendation from the 2009 DPR Special Committee regarding Missing Persons asking the President to establish an ad hoc Human Rights Court for the case of Enforced Disappearances 97/98. However, former President Susilo Bambang Yudhoyono and current President Joko Widodo have not yet established an ad hoc Human Rights Court for the case.

Second, as stated in the Constitutional Court’s decision above, the DPR is a political institution that reflects the representation of the people, not law enforcement officers. Therefore, the assessment of criminal evidence to answer whether a case can be proven or not, clearly is not the DPR’s authority.

Involving elements of the TNI who are defense officers and not law enforcement officers in the process of resolving serious human rights violations reflects the failure of Mahfud MD and the nation in placing the duty of the military in the framework of a democratic State based on civilian supremacy. The TNI, which in the New Order era was named the ABRI, was recorded in history as an element involved in a series of serious human rights violations in Indonesia. The process that should be taken by the nation either through Komnas HAM or the Attorney General’s Office is an investigation and prosecution that also needs to pay attention to the concept of the command line, requesting accountability from high ranking agencies, both military or civilian, and the Government.

The chaotic statement of Mahfud MD is intertwined with inconsequential regulations produced by the TNI internally. The TNI Commander’s Telegram Letter Number ST/1221/2021 which regulates a number of new procedural law provisions in enforcing the criminal law process for members of the TNI contains many problems. Members of the TNI who commit general crimes as regulated in Law 34/2004 concerning the TNI must submit to the general judicial process as other citizens. This provision has also been clearly stated in Article 27 Paragraph 1 of the 1945 Constitution which stipulates that everyone has the right to be treated equally before the law. Mahfud MD’s legitimacy regarding the complicated legal process for members of the TNI as stated in the Telegram Letter of TNI Commander certainly has the potential to perpetuate impunity and does not stop the chain of violence that has become a bad feature of the TNI so far.

Mahfud MD’s statement in his meeting with the TNI Commander Andika Perkasa clarified the situation that the remaining three years of President Joko Widodo’s reign are not filled with fulfilling the responsibility for solving serious human rights violations, but rather setbacks in many aspects. No trial has yet been held. The Government has even filled in a number of names that should have been targeted for investigation so that the law can be enforced. The shortcut efforts that the Government calls “recovery” also tarnish the sense of justice and provisions based on universally applicable human rights values and principles.

In view of the above misrepresentations, we urge:

« SRI LANKA: Appeal to help build a house for family of disappeared

INDIA: A botched up counter insurgency operation and murders most foul »