The AHRC notes that pre-trial detention under the Indonesian Criminal Law Procedure (KUHAP) needs serious reform. This is due to the Law that has caused problems of unfair trial, torture, and access to proper legal aid. Since 2012 the Parliament has not yet shown any progress in completing the new bill on Indonesia Criminal Law Procedure.

In the Indonesian legal system, detention can be imposed for a criminal offense, punishable by 5 years or more in prison. Lawmakers tend to impose heavy criminal charges as a solution for law enforcement issues in Indonesia. They do not take into consideration that by imposing heavy criminal charges it means that pre-trial detention will be extended–triggering violations of a fair trial. 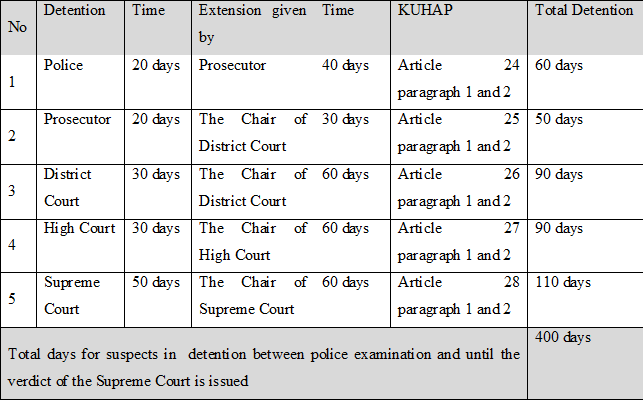 Under Article 21 paragraph (1) of the Indonesian Law of Criminal Procedure, before detention is imposed upon suspects or defendants, investigators should take into consideration the circumstances that are causing concern, such as:

a. The suspect or the accused will flee;
b. Impairment or elimination of the evidence;
c. Fear of repeating the criminal act;

Some instances of pre-trial detention that have resulted in torture :

The latest case of torture due to pre-trial detention can be seen in the torture to death of Mr. Hendri Alfred. Police officers of the Barelang City Police Resort (Polresta Barelang), Batam, Riau Islands Province, tortured to death Mr. Henry Alfree Bakari. Hendri was arrested on 6 August 2020 by Police Officers of the Narcotic Unit of Barelang City Police Resort. There is a strong indication that Hendri experienced torture during his arrest and during police examination at the Police Headquarters. According to medical records Hendri suffered many injuries to his body. Currently, the Regional Police Office of Riau Islands Province has conducted an examination of the Police Officers who allegedly tortured Hendri Alfred to death.

Previously, the AHRC issued a statement about the torture to death of Mr. La Gode, a resident of Taliabu Island, North Moluccas province, Indonesia.

After he was arrested by police officers and detained in the Military Post of Task Force (Satgas) 732/Buana, Mr. Gode passed away after sustaining serious injuries to his body, particularly on the back and his lateral side.

3. Mr. Undang Kasim, a prisoner who died in the prison

Another example is the case of Mr. Undang Kasim, a prisoner of Banceuy prison. Mr. Undang was apparently found guilty of smuggling drugs into the prison.

The case occurred in 2016, as a result of the waiver and longer stays in overcrowded prisons, where clashes erupted in the Banceuy Prison, in Bandung, West Java Province. The overcrowded prison and clashes had resulted in the death of one prisoner, Mr. Undang Kasim (54). He was found dead a day after the prison guards punished him with solitary confinement.

On 30 March 2016, at 7 p.m., Mr. Juprianto, who allegedly stole a motorcycle, surrendered to the Luwu police (Polres Luwu). Mr. Herianto, a cousin of Juprianto’s wife, accompanied him. Juprianto was in good physical condition when he gave himself up. After three days, on April 1, Juprianto`s wife visited her husband and found several injuries on his body. When she next visited him on April 3, she found him in a critical condition with new injuries. Juprianto told his wife that he was tortured by the Luwu Police Officers. He was tortured both during the field examination in Padang Sappa Police Sector (Polsek Padang Sappa) and during the examination in the Luwu Police Station. Juprianto told his wife that he sustained various injuries. These injuries were on the front of the left and right knees due to beatings by Police Officers using a black stick; the front of the left and right shins down to the feet after being kicked; the front of the shinbone of the foot up to the ankle; the entire left and right leg due to being kicked by Policemen wearing boots; the beating by a blunt object; the trauma to his back due to trampling by Police Officers.

On 3 December 2015, Marianus Oki was arrested. Before he was taken away, his family tried to clarify the situation, but the Police would not give any explanation or show an arrest warrant. When Marninus’ elder brother came to the Banat Manas Police Post with food for his brother at 10 p.m., he was not allowed to give it to him. The following day, at 7 a.m., one of the Police Officers came to Marinus’ family home and tried to force the family to accept a “peace proposal.” At 4 p.m., when the family came to the Banat Manas Police Post, they were told that Marinus was dead. According to the Police, Marinus had hung himself while in custody. According to the latest information, police investigators are presently awaiting the results of the forensic laboratory in Denpasar, Bali, and Police Headquarters.

Torture in Police custody and prison, is still a serious problem in Indonesian. Despite the fact that Indonesia has ratified the International Convention on Torture, the Government has yet to issue a special law on torture and the Penal Code does not recognize torture as a crime. This circumstance has resulted in rampant cases of torture while in custody in Indonesia.

Torture is still used as a method of obtaining confessions from suspects or accused persons. Police Headquarters had issued an internal regulation on human rights in practice in daily Police duties. But, in fact, there has been no serious efforts made by the Security Forces to reduce or eradicate torture.

The Asian Human Rights Commission (AHRC) along with its local partners has documented and reported many cases of torture in Indonesia.

According to the data documented and reported by the AHRC, torture occurred with several patterns, for examples torture in the Police custody to obtain confessions; revenge and political motives.

In view of the above situation, the AHRC therefore requests the UN Human Rights Council and its agency to undertake studies to assess the root causes of pre-trial detention that that have resulted in torture, unfair trials and fabricated cases.