The Asian Human Rights Commission (AHRC) strongly condemns the terrorist attacks and suicide bombings which occurred in several churches in Surabaya, East Java Province. We note that the attacks resulted in at least 11 people killed and 41 injured. When the bombs exploded around 7a.m. they struck terror into the hearts of Indonesia’s sizeable, minority, Christian community. Places of worship affected included Saint Mary Immaculate (STMB) Catholic Church of Surabaya on JL, Ngegel Madya in Gubeng, Surabaya Pentecostal Church (GPPS) on JL, Raya Arjuna and Diponegoro Indonesian Christian Church (GKI) on JL Diponegoro. We also deplore the suicide bombing which occurred in front of the Surabaya Police Station (Polrestabes Surabaya) on the morning of May 14, 2018. 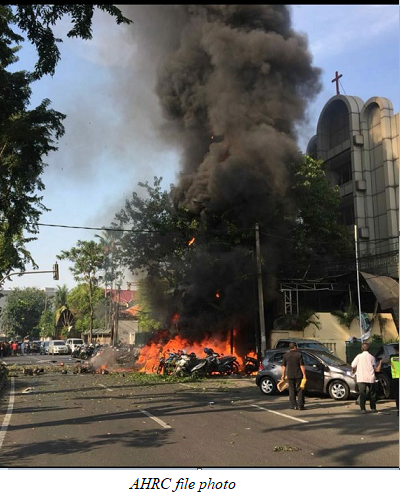 We would like to convey our deepest condolences and support for the victims and their families. We do hope that the families can keep strong in facing these dire circumstances affecting their lives. We sincerely feel a deep affinity for those who have lost family members. The continuation of the terrorist attacks in Indonesia is a real threat against the further development of human rights and democracy in the country.

In this matter, we would like to express our appreciation for the work of the Government, in particular the Police. They helped the victims, supporting them economically and socially. It can become an entry door to provide solutions for the victims of terrorist attacks. We fully affirm and support the National Police when they take all necessary security measures to protect every citizen from the consequences of terrorist attacks.

The AHRC is aware that, whatever form a terrorist attack takes, it has no connection with any definite religion. Terrorists are criminals and terrorism is a crime which the State must be aware of and deal with appropriately. The State must have the capacity to be able to develop an early warning system, a prevention system and a credible punishment system attached to the Indonesian Criminal Justice System.

In May of this year, terrorist suspects (detainees) attacked Police Officers at the National Police Mobile Brigade (Mako Brimob) Detention Center in Kelapa Dua, Depok, West Java. Five (5) Mobile Brigade (Brimob) members were killed. Another Officer is being held hostage. One terror detainee was killed during the incident after making repeated threats and attempting to steal a police weapon.

Critiquing and learning from the above situation, the AHRC concludes that the Anti-Terror System in Indonesia remains weak. Continuing terrorist attacks and suicide bombings give clear evidence of this. For instance suicide bombings occurred in Jakarta as follows: Kampung Melayu (24/5/2017) and Jalan MH Thamrin (14/1/2016). Previously noted were terrorist bombings in the Bursa Efek Jakarta (2000), in Plaza Atrimum (2001), in JW Marriot (2003), in Kuningan (2004), and in Mega Kuningan (2009). [The AHRC previous statement on terrorism can be read here].

Despite the fact that the Government has established a Special Detachment Anti-Terror Squad, known as Densus 88, terrorism and terrorist attacks still take place frequently. Seemingly they are growing in terms of number, pattern and forms of the crimes.

Nonetheless, we deplore that the Government’s Coordinating Minister of Politics, Law and Security (MENKOPOLHUKAM) simply called for a faster drafting process of the New Anti-Terror Bill. The AHRC notes that the new Anti-Terror Bill needs serious revision, since the drafting committee co-opted the Military into the war against terrorism. There are no clear or detailed reasons or rules on the involvement of the Military in the new bill. So, the Government should be very careful when enacting the new anti-terror law involving the Military. No need to say that, the new bill must be reviewed comprehensively, considering human rights, the Rule of Law and fair trial principles.

To this end, the AHRC is calling for the Government of the Republic of Indonesia, in particular, the Police and the National Counter-Terrorism Agency (BNPT) to thoroughly review their policies and roles in combating terrorism in Indonesia. Immediate action must be taken by the Government to tackle repeated terrorist attacks occurring in the country in these past weeks.

INDIA: Future Imperfect-Hungrier and indebted than ever before »