Home / News / PAKISTAN: More than 100 dead bodies from three mass graves were found in one district of Balochistan

PAKISTAN: More than 100 dead bodies from three mass graves were found in one district of Balochistan 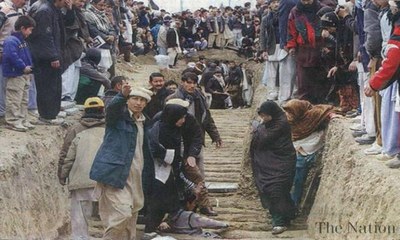 The Asian Human Rights Commission (AHRC) expresses shock and deep concern over the discovery of mass graves in Balochistan; it is suspected that these graves are of Baloch missing persons who were arrested and subsequently extrajudicially killed. A large number of family members gathered around the places of Tootak village, district Khuzdar to inquire about their loved ones who have been missing for many years. However, the police and other security forces refused them permission to try and identify the bodies and baton charged the people to disperse them.

On January 25, three mass graves were found after one of them was discovered by a shepherd who saw pieces of human bodies and bones. He informed the Levies, a private armed force organised by tribal leaders, and according to Assistant Commissioner, district Khuzdar, Mr. Afzal Supra, Balochistan, the grave was excavated and 15 bodies were found.

As the news of the mass grave spread throughout the district people gathered there and started digging in the nearby area where they found two more mass graves. In total 103 bodies were recovered from the graves. The bodies were too decomposed to be identified. From the three mass graves 17, 8 and 78 bodies were found but the local people say that a total of 169 bodies have been found. People have witnessed more than 100 human bodies in Tootak while they were digging the area. However, Pakistani military forces stopped the local people from unearthing the mass graves and took control of the area. Now, no one is allowed access to the location except military personnel.

According to the media, a security official who spoke on condition of anonymity said so far they have found around 56 unidentified graves and that there are many more. It is claimed that these bodies are those of Baloch missing persons.

The confirmation by government officials that over one dozen bullet-riddled bodies have been dumped in unmarked graves — many of them considered to be mass graves — in Balochistan has exposed the gross human rights abuses perpetrated by the security forces over the years in a bid to suppress a popular uprising against the government.

It is feared that more mass graves will be found in the coming days. However, the Pakistan Army, in order to hide its crimes, is not allowing any civilian or media outlets to visit the area. Anyone trying to gain access to the area comes under live fire by the Army. It is believed that the genocide of Balochis is one of the biggest mass killings of the 21st century.

Nasrullah Baloch, the vice chairman of the Voice for Baloch Missing Persons (VBMP), fears that their relatives who disappeared following arrest by the security services in the restive province might be buried in those graves. Baloch says that his cousin and the son of Mama Qadeer, who is leading the historical long march for the recovery of missing persons, Jalil Reki and another, Sana Sangat were brought to Khuzdar after arrest and killed after some days. He believes that their bodies must be here with others.

These mass graves were found very close to the residence of Mr. Shafique Mengal, who is a well known man of the security agencies and who is heading a militant organisation with the name of Nifaz-e-Amn. The organisation claims itself to be affiliated to the Pakistan security forces, working for the implementation of Islam and against Anti State elements. He has been provided with 30 armed vehicles. Whenever the security forces fail to conduct actions in tribal and mountainous areas they ask for Mengal’s help. The Frontier Corp (FC) own this organisation as the true one working body for the protection of Balochistan. The FC and other forces, as claimed by Baloch nationalist groups, have helped him to make private jails and torture centers in Tootak where the missing persons are brought and tortured before being extrajudicially killed. There is no power supply in the area but interestingly, electricity lines were provided to his private jails and his ‘fort’ which is guarded by the law enforcement agencies.

Human rights violations could soon escalate as the Pakistani government recently passed a new controversial law, the ‘Pakistani Protection Ordinance’- PPO, which has legalised enforced disappearances. The government has made an amendment in the PPO, though it has yet to be approved by the parliament. In an effort to provide protection for the crimes of the security forces the government has given legal cover for enforced disappearances and allows the security agencies to keep any suspect for up to three months without presenting them before a court and in cases of suspected terrorism the person can be kept for six months in their custody.

The crimes of the security agencies in Balochistan and the mass-scale disappearances and extrajudicial killings have now been exposed by the discoveries of these mass graves.

The non-investigation of the enforced disappearance of thousands of persons in Balochistan can be likened to the concentration camps of the Nazi’s who operated without any control or oversight; in a similar fashion as the armed forces and security agencies in Pakistan who answer to no one.

The AHRC urges the government of Pakistan to immediately form a transparent high judicial inquiry to probe the cases of the mass graves and provide information relating to the possible identities of the deceased persons. It is a prime responsibility of the government to inform the nation of each and every development in the progress of the investigation. Otherwise it will be difficult to control the volatile situation in Balochistan which may well spread like wildfire throughout the entire country.

The Supreme Court of Pakistan must take Sou Moto action on the discovery of the mass graves.

The AHRC urges the United Nations to send a high powered fact finding mission to probe the presence of mass graves in Balochistan province, particularly in Khuzdar district. It must be pointed out that the people of Pakistan do not expect any proper and transparent investigation from their government and the security agencies as they themselves are involved in the killings and enforced disappearances and the concealment of such crimes, therefore, the importance of a UN report cannot be over emphasised.

« INDIA: An Open Letter to the Prime Minister from a child suffering from Tuberculosis

NEPAL: Ensure the maximum sentence to perpetrators who beat a Dalit woman and a journalist and smeared them with black soot »